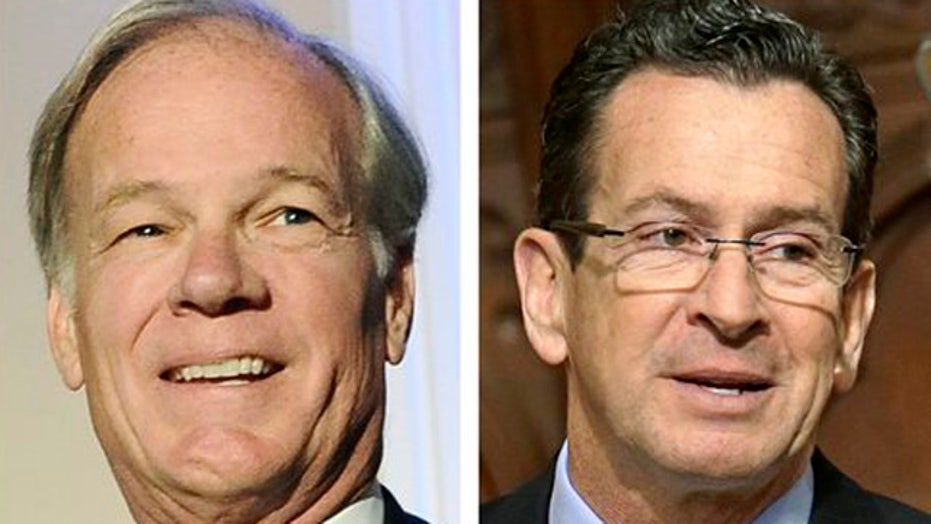 The governor’s race in traditionally liberal Connecticut is quickly turning into one of the tightest and toughest in the country, as Republican Tom Foley looks to settle an old score against incumbent Democratic Gov. Dannel Malloy.

Foley is now in a rematch against Malloy after being selected as the GOP’s nominee last week. The two went head-to-head for the governor’s seat back in 2010 -- the race was so close that a mere half-percentage point separated the two in the end.

The rematch is taking a similar trajectory, with the rivals again polling within single percentage points of each other.

As in gubernatorial contests across the country, economy is key in Connecticut. But the race, even before last week’s primaries, was sparking national controversy as Malloy also started invoking the Newtown school shooting as a campaign issue.

He launched a campaign ad featuring a mother who lost her son in the mass shooting, in an attempt to highlight the governor’s leadership in time of crisis.

Foley, though, said the ad buy won’t do the governor any favors.

Danbury Mayor Mark Boughton, who lives 10 minutes from Sandy Hook Elementary School and is a Foley ally, said the governor crossed the line. “In the ad that the governor ran, there is a picture from the day of the incident, which I think is way out of bounds,” Boughton said.

But Malloy’s camp stands by the decision.

“The Republicans would object to it no matter what, because they are running against us,” Mark Bergman, senior advisor for Malloy, said, saying the woman in the ad, Nicole Hockley, “reached out to our campaign” and “said she didn’t feel exploited.”

The race is close enough that small movements in public opinion could make the difference.

The latest Quinnipiac poll released in June gave Foley an edge with 43 percent of the vote, compared with Malloy’s 40 percent. The X-factor in the race is the state’s huge population of unaffiliated voters, who make up a whopping 43 percent of the electorate.

“What it really comes down to is who will get the independent vote,” Rose said. “And it’s going to be a very tough race. But in terms of the raw demographics, those are on the side of the governor right now.”

With over $20 million pouring into the election from outside and allied groups, analysts predict there is going to be an additional influx of negative ads from both camps. Rose said compared to the race in 2010, this election year is shaping up to be the dirtiest yet.

“The ads were just absolutely savage. I think in this gubernatorial contest that pattern is going to continue. … And believe it or not, the reason we are going to see so much negative advertising is because it works.”

Both candidates say their opponents’ use of personal attacks distracts from the real issues.

“I think it’s insulting to voters to go negative and make things personal. But I think it also shows he’s desperate,” Foley said of the governor’s recent attacks.

Bergman countered: “Tom Foley can throw, can play all the name games he wants, but that’s not a plan. And frankly he’s been devoid of specifics, devoid of a plan.”

Foley says he has been specific about the issues from the beginning.

Johnathan Harris, executive director of the Connecticut Democratic Party, said the GOP is using ads to hide the facts, “flooding the airwaves to just confuse people and make them not think about the progress that we’ve actually made.”

Moving toward Election Day, both campaigns agree that the economy is the principal voting issue. “Governor Malloy comes into office, engages businesses and citizens, makes the tough choices. We’ve had 55,000 private sector jobs created and unemployment the lowest it’s been in the past five years,” Harris said.

Foley disagrees, saying: “One party rule hasn’t worked. These policies have driven jobs and driven taxpayers out of state.”

The Democratic and Republican governors associations are pouring resources into the state. Both state parties have traded barbs over campaign finance regulations. Boughton, who was also Foley’s running mate in 2010, said those moves are mainly political. “I think you’re going to see complaints filed on both sides about illegal coordination and activity. It’s all a bunch of noise and a bunch of nonsense,” he said.

Whether or not the blue state flips in Republicans’ favor, Rose thinks the contest will be “one of those races that makes the textbooks.”