A small Ohio town that lived by the red light camera could soon die by it, after a federal court ruled the speed trap has to pay back more than $3 million in automated speeding tickets.

The case of New Miami, population 2,321, highlights the controversy behind the tickets, which make stoplight-running motorists see red, but help keep the budgets of cities and towns in the black. New Miami will almost certainly go bankrupt if the Supreme Court doesn’t reverse a lower court’s ruling and spare it from refunding tens of thousands of tickets at $180 apiece plus interest.

“The village enacted this unconstitutional scheme primarily as a money making venture,” Josh Engel, the lawyer representing the plaintiffs in the New Miami case, told Fox News. “They increased their spending significantly after the scheme was put in place and it was basically used to fill holes in their budget that would traditionally have come from raising taxes.”

The case of New Miami is seen by many drivers across the country – including numerous lawmakers and lawyers – as the epitome of municipalities abusing their power by setting up speed traps and red light cameras in an attempt, not to make roadways safer, but to line their coffers.

“As with most issues there are elements of truth on both sides,” Bill Seitz, a Republican state representative from Ohio, told Fox News. “But many of these jurisdictions are using these tickets as revenue enhancements that ticket people for only minor infractions.”

Seitz is currently working to push a bill through the Ohio statehouse that would require cities to file all traffic camera cases in municipal court and would reduce state funding to cities by the same amount cities collect in traffic camera revenue.

The Ohio representative, who himself was caught on camera rolling through a red light in Columbus, added that in 2006 and 2014 lawmakers approved restrictions on photo enforcement cameras and that limits or bands on the devices enjoy wide support in cities like Cincinnati and Cleveland.

The current animosity directed at the cameras marks a shift in public sentiment toward the cameras.

While it is tough to pinpoint the national pulse as most studies are conducted at a state and regional level, but it appears that there are a growing number of areas who are starting to question whether the speed camera programs are effective or even constitutional. 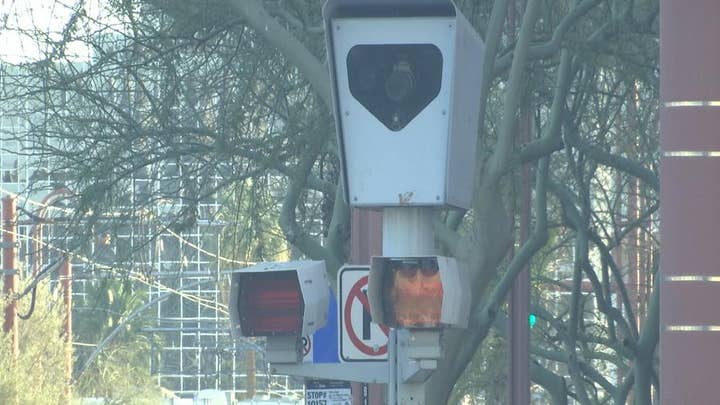 Seven states are currently considering legislation to prohibit red light and speed camera use amid concerns that they are ripe for abuse and IIHS study found that the number of red light cameras in the U.S. dropped to 467 in 2015 from its peak of 553 in 2012.

Klein earlier this year filed a class action lawsuit against the city that argues that speed camera tickets are invalid and violate New York state law as the city failed to file all of the required paperwork with the court before allowing a private contractor to drop the photo ticket in the mail. New York City’s 2018 budget expects to haul in $119 million in photo enforcement fines.

Proponents of the cameras, however, argue that they significantly lower the number of accidents on the road as both speeding and going through red lights are two of the biggest causes of car crashes in the country, according to the U.S. Department of Transportation.

The most recent study by the Insurance Institute for Highway Safety found that nearly 1,300 lives were saved through 2014 in 79 large U.S. cities that installed red light cameras and, in a study of one county in Maryland, radar cameras installed on local roads reduced fatal or incapacitating injuries by 39 percent.

“Red light running is one of the biggest factors in crashes,” Russ Rader, a spokesman for the IIHS, told Fox News. “But [these crashes] are sharply reduced when cities use red light cameras.”

But a slew of recent corruption cases across the country involving local government officials and companies selling the cameras is not helping the image of them as moneymakers for municipalities.

In Chicago, camera vendor Redflex won in 2003 a $120 million contract to install 384 cameras and collected more than $400 million in traffic fines. It was eventually revealed that Redflex bribed Chicago City hall manager John Bills with $2,000 for every camera installed as well as giving him vacations, a condominium in Arizona and Mercedes among other favors.

Bills was eventually sentenced to 10 years in federal prison in a corruption scandal that rocked the city, while two Redflex higher-ups were sent to jail and the company was forced to pay $20 million to the city to settle a lawsuit.

Redflex did not respond to Fox News’ request for comment.

In Ohio, New Miami will have to wait to see if the state’s Supreme Court decides to take a look at their plea – something it only does with roughly seven percent of cases filed annually. Engel, the plaintiff’s lawyer, says he believes that going to the state’s highest court is just another move by the village to delay making their payments.

“The village is well aware that the chances of the Supreme Court deciding to hear this issue is slim. So why are they pursuing this Hail Mary?” Engel told the Journal-News. “This is another stalling tactic to further delay having to pay back the money taken from motorists in an unconstitutional scheme.”