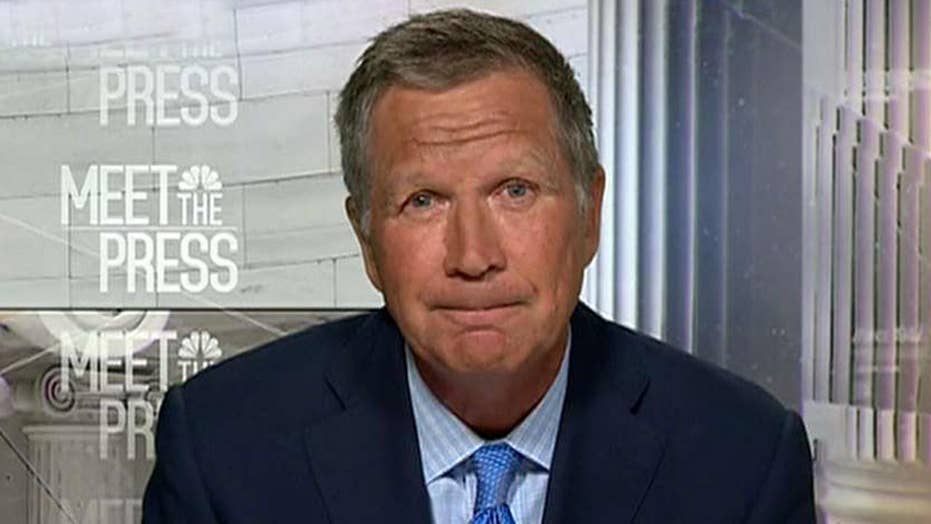 Ohio Gov. John Kasich vetoed a bill Friday that would have increased benefits for deceased first responders' families because lawmakers tacked onto the bill a $13,000 pay increase for themselves, according to reports.

But some of the bill's supporters said they hoped to see Kasich's veto overridden next week.

The proposed pay increase for state lawmakers was added to the bill late in the session in before the final vote last week, reports said.

In Senate Bill 296, Ohio lawmakers would be increasing their salaries from $60,584 to $73,167 annually by 2028, the Washington Free Beacon reported. It would be their first pay raise in 10 years, the Cincinnati Enquirer reported.

The bill also called for increasing the base pay over a 10-year period, while also increasing benefits for widows and children of deceased police officers and firefighters, the reports said.

"I would have signed such a bill into law," Kasich wrote, referring to the assistance for first responders' families, according to the Enquirer. "Unfortunately, I cannot support or condone the last-minute rush to include a controversial pay raise for elected officials into what was an otherwise commendable bill."

The bill was sponsored by Republican state Sen. Jay Hottinger of Newark, who tweeted his displeasure on Friday.

First responders and their families also disagreed with the governor's action.

“It’s unfortunate that he couldn’t allow this bill to become law and we’re going to work hard to get it overridden,” Jay McDonald, a past president of the Ohio Fraternal Order of Police, told the Dayton Daily News. “The fallen officers and their families deserve better than this and we need to remember them, especially this time of year.”

But another Republican, Frank LaRose of Hudson, who was initially a sponsor of SB296, took his name off the bill, referring to the pay increases in a tweet as an "11th hour maneuver."

On Friday, Kasich also vetoed a controversial bill that would have outlawed abortion after a fetal heartbeat is detected, effectively banning abortion after the first few weeks of a pregnancy, the Hill reported. The bill is also known as the "heartbeat bill."

But the Ohio governor signed legislation that would ban the dilation and evacuation (or "D&E") procedures, which have been used for 95 percent of second-trimester abortions nationally, the report said. The law effectively bans most abortions as early as 12 weeks into a pregnancy, according to the report. About 17 percent of abortions performed in Ohio last year used this method.

Elizabeth Nash, a policy analyst for the Guttmacher Institute, a policy group that supports abortion rights, said the heartbeat bill may have won veto-proof majorities for the first time in the Ohio House and Senate as the latest class of conservative lawmakers looks to make their mark on one of the last remaining wedge issues.

"Ohio has added so many abortion restrictions that this was just about the only thing left to pass. Ohio has the 20-week ban, waiting period, counseling, ultrasound, clinic regulations," she said. "So Ohio has every single abortion restriction on the books. This is what's left."

Kasich this week also vetoed a bill calling for a "stand your ground" policy on shootings, but added he would support a better gun bill.

“If you think I’m going to sign a bill that gives more power to the gun folks, are you kidding me?” Kasich told reporters, according to the Enquirer. "That’s a moral issue: gun violence."

Lawmakers could still vote on any vetoed bills when they return to Columbus on Thursday, the reports said.