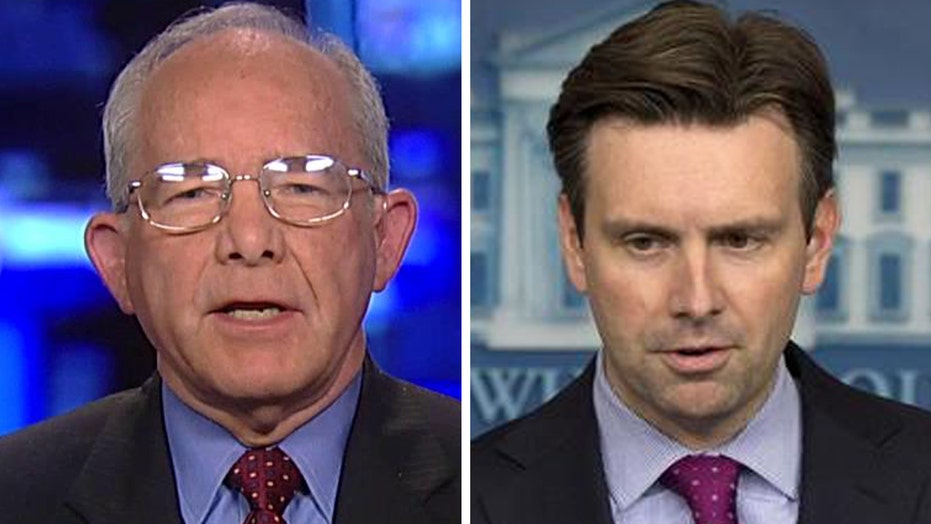 Former deputy assistant secretary of state and defense takes issue with White House insistence that conflict in Syria would not turn into a proxy war between the U.S. and Russia

Moscow is "deliberately targeting" U.S.-backed forces in Syria as part of a military campaign that has killed up to 150 CIA-trained rebels, a U.S. official told Fox News.

The claim comes as the U.S. and Russian militaries try to reach an agreement about flight safety in the skies over Syria. Officials from both countries are holding their third video conference on the issue Wednesday, as U.S.-led coalition and Russian aircraft look to avoid collisions as they launch airstrikes into Syria.

But even as they try to "de-conflict," evidence is mounting that Russia's air campaign is targeting more than just the Islamic State.

"Putin is deliberately targeting our forces," a U.S. official, who is disappointed in the U.S. response to Russia, told Fox News.

"Our guys are fighting for their lives," said the official, estimating up to 150 CIA-trained moderate rebels have been killed by the Russians.

“Striking ISIL continues to be the least of Moscow’s priorities in Syria, said a U.S. intelligence official who also warned Putin might not look so tough if a Russian helicopter were downed or some Russian soldiers captured.

“In the modern age of social media, one captured Russian soldier paraded by extremists could shock the Russian population,” the official said.

The Obama administration recently ended its troubled program to train select Syrian rebels, but has continued to equip the opposition. Over the weekend, the U.S. military airdropped 50 tons of small arms ammo and grenades in northern Syria.

But there are doubts as to whether the administration would go any further to protect the rebels from Russian airstrikes.

Meanwhile, a defense official told Fox News the Russians are fighting on two fronts in Syria at the moment -- with forces advancing north from Hama, and another contingent including Assad regime troops advancing to the northeast toward Idlib province.

Iranian-backed forces, predominately Hezbollah fighters, are leading the regime's fight in Idlib province in northwest Syria in the vicinity of Aleppo.

The Pentagon believes they include Hezbollah operatives who have been defending the regime for years in Syria.Iranian and Syrian officials have long maintained that Iran has advisers and military experts in Syria.A U.S. official on Wednesday also told Fox News there is evidence from intelligence reports that Cuban paramilitary and special forces units are on the ground in Syria as well.

Russia began carrying out airstrikes in Syria on Sept. 30, and Syrian troops and allied militiamen began a ground offensive a week later.

According to a senior U.S. defense official, the talks with Russian officials on Wednesday are to de-conflict airspace over Syria, and not to discuss military coordination with the Russian military.

"They aren't targeting ISIL, so there is nothing to coordinate," the official told Fox News. "The only role Russia can or should play in Syria is in assisting Assad to step aside. Everything else is counterproductive. They have been completely disingenuous about their desire to fight ISIL."