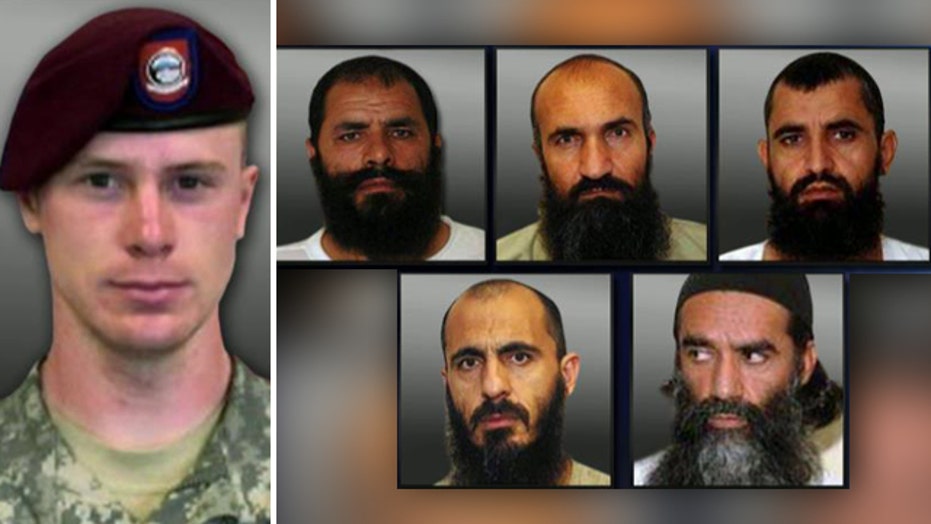 How dangerous are terror prisoner swaps?

Official: Gitmo prisoner traded for Bergdahl reaching out to Taliban

One of the five Taliban fighters traded last year for Sgt. Bowe Bergdahl is trying to make contact with the Taliban once again, Fox News has learned.

A U.S. official confirmed to Fox News that the former Guantanamo prisoner has been intercepted making telephone calls to the Taliban.

The development comes amid rising concerns over former Guantanamo detainees returning to the battlefield, and over the nature of the Bergdahl-Taliban trade itself last year, which was negotiated with the involvement of the Qatari government.

Despite the apparent outreach by one of the traded prisoners, all five of the so-called “Taliban 5” are still accounted for in Qatar, a senior U.S. defense official told Fox News.

"There are no indications that they are a risk right now,” another defense official said.

In an interview with Fox News' Sean Hannity on Thursday, Pentagon spokesman Rear Admiral John Kirby said, "first of all, we take all allegations of re-engagement very seriously. There are different ways  of considering re-engagement. It doesn’t necessarily mean return to the battlefield, we take it all seriously.

"We have a good security partnership with the government of Qatar, they have provided assurances and I can tell you, we are comfortable at the Defense Department that we can mitigate any threat that could be posed by anyone of the individuals in terms of terrorist activity."

CNN first reported that one of the former detainees has tried to return to militant activity. According to CNN, this has touched off a debate in the Obama administration about whether this individual, who was not identified, and even the other four pose a new threat.

The development is already reverberating on Capitol Hill.

"If President Obama continues to release these dangerous terrorists, there will be a steep price to pay – very likely in lost American lives," said House Intelligence Committee Chairman Devin Nunes.

“I am extremely disturbed by a report that one of the Taliban 5 is suspected of re-engaging in terrorist activities,” Sen. Kelly Ayotte, R-N.H., a member of the Senate Armed Services Committee who wants to suspend the transfer of high-risk detainees out of Guantanamo Bay, said in a statement Thursday. “This report highlights the danger of the administration’s irresponsible decision to transfer the Taliban 5, and underscores yet again the serious risks posed by the misguided effort to empty Guantanamo in order to close it.”

Mac Thornberry, R-Texas, the chairman of the House Armed Services Committee, while not able to confirm the report, said it was "almost inevitable" that a freed Taliban fighter would return to terrorism.

"Has a terrorist released at (President Obama's) direction returned to militant activity? If so, will he take action to detain this individual as he should have continued to do?" Thornberry told Fox News. "In cases like this, the president should not hide behind the convenience of classified information to shield himself from what is reportedly a very serious concern."

“However,” he said, “we take any incidence of re-engagement very seriously, and we work in close coordination through military, intelligence, law enforcement, and diplomatic channels to mitigate re-engagement and to take follow-on action when necessary.