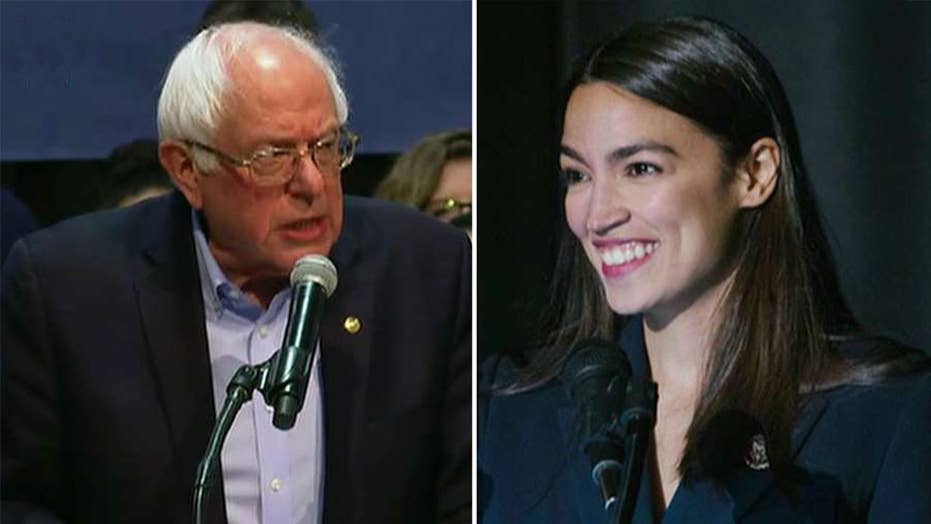 Rep. Alexandria Ocasio-Cortez might only be a freshman congresswoman, but she could yet be a kingmaker in 2020.

The New York Democrat told reporters she is "entertaining" the idea of endorsing a candidate in the crowded race to win her party's nomination, and while she hasn’t yet picked a candidate, she believes Sens. Elizabeth Warren or Bernie Sanders are someone she could endorse.

“What I’d like to see in a presidential candidate is one that has a coherent worldview and logic from which all these policy proposals are coming forward,” Ocasio-Cortez said. “I think Sen. Sanders has that. I also think Sen. Warren has that.”

She went on to add that she also wants to see “working people” in the Democratic primary focusing on combatting income inequality, climate change, and being “bold to really big ideas that are gonna make people lives better.”

"What I’d like to see in a presidential candidate is one that has a coherent worldview and logic from which all these policy proposals are coming forward."

She didn’t respond to a question whether she would support former Vice President Joe Biden’s candidacy. Ocasio-Cortez has previously said a bid by Biden would be going backward, instead of forward.

“That does not particularly animate right now,” she told Yahoo last month, adding that she has “a lot of issues” with a potential Biden run.

Ocasio-Cortez and Sanders unveiled a new proposal on Thursday that aims to put a 15 percent cap on credit card interest rates, with the ability of states to establish lower limits if they wish.

Multiple Democratic 2020 candidates also endorsed the Green New Deal, a radical proposal introduced by Ocasio-Cortez and Sen. Ed Markey that aims to transform the economy in an effort to tackle climate change.

Yet while Ocasio-Cortez remains the rising star of the progressive wing of the Democratic Party, it’s likely that some campaigns could see her endorsement a drawback rather than an advantage during the general election against Trump.

Polls show that Ocasio-Cortez favorability ranking has tanked just months after arriving to Congress, with most of the public – particularly Republicans – viewing her negatively rather than favorably.