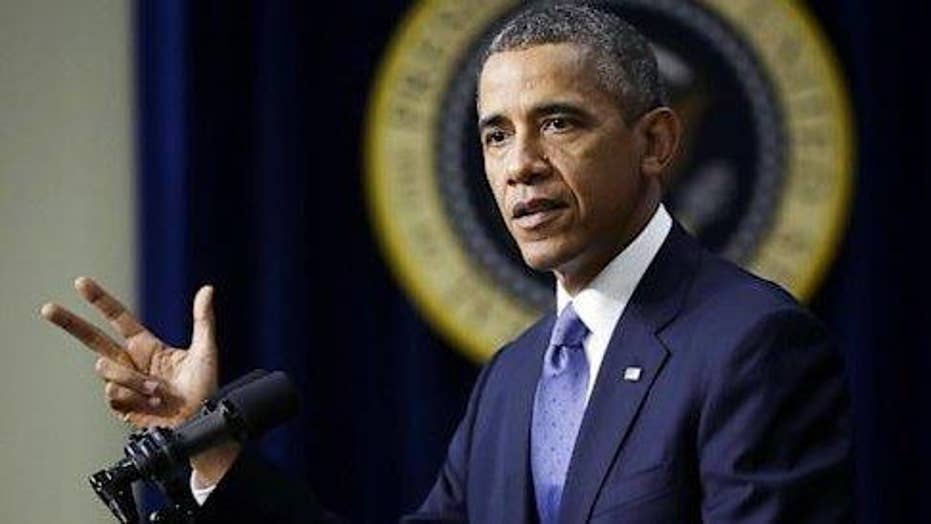 War of words in repeal showdown between Republicans and Democrats

The outgoing commander-in-chief is saying farewell over a series of essays, memos and addresses that started with a closing national security speech in Tampa a month ago and will continue through his official farewell address in his hometown of Chicago next Tuesday.

In the interim, the president filed his latest installment Thursday, publishing a letter to the American people outlining his proudest accomplishments and biggest regrets from his eight years in office. It was accompanied by 27 individual “exit memos” from top Cabinet and other administration officials.

Got some spare time? Read them here.

To boot, the president authored a detailed, 56-page article for the Harvard Law Review – the publication he once led as a law student – on criminal justice reform. And on Wednesday, he said goodbye to the Armed Forces during a ceremony at nearby Joint Base Myer-Henderson Hall, after making what could be a parting visit to congressional Democrats on Capitol Hill.

In his letter Thursday to the American people, Obama once again touted his administration’s work helping the country recover from the 2008 financial crisis.

“Eight years later, an economy that was shrinking at more than 8 percent is now growing at more than 3 percent. Businesses that were bleeding jobs unleashed the longest streak of job creation on record,” he wrote.

Obama also touted gains in the number of insured Americans under the Affordable Care Act, a reduction in dependence on foreign oil, an increase in the high school graduation rate, and a decrease in the poverty rate.

“Meanwhile, over the past eight years, no foreign terrorist organization has successfully planned and executed an attack on our homeland. Plots have been disrupted. Terrorists like Usama bin Laden have been taken off the battlefield,” he wrote, before going on to tout diplomatic milestones like the Iran nuclear deal and the thaw with Cuba.

The letter glosses over the sustained Republican resistance to and concerns about the Iran deal – as well as the spread of Islamic State affiliates and other terror groups that still threaten the U.S. and its allies, though Obama did acknowledge in his speech a day earlier that President-elect Donald Trump will face the challenge of quashing ISIS when he takes office.

In his letter, Obama did cite a few regrets, including a failure to pass sweeping gun legislation and immigration reform.

[F]or all that we've achieved, there's still so much I wish we'd been able to do, from enacting gun safety measures to protect more of our kids and our cops from mass shootings like Newtown, to passing common sense immigration reform that encourages the best and brightest from around the world to study, stay and create jobs in America,” he wrote. “And for all the incredible progress our economy has made in just eight years, we still have more work to do for every American still in need of a good job or a raise, paid leave or a dignified retirement.”

Trump tapped into such widespread economic concerns in his successful presidential campaign, during which he blamed government regulations, bad trade deals and other factors for a hollowing of the middle class and challenged administration claims that the economy has surged back from the 2008 crisis.

As he did on Capitol Hill Wednesday, though, Obama used his goodbye letter to warn Republicans against rolling back his signature health care law – something the incoming administration has made its first order of business.

“What won't help is taking health care away from 30 million Americans, most of them white and working class; denying overtime pay to workers, most of whom have more than earned it; or privatizing Medicare and Social Security and letting Wall Street regulate itself again -- none of which middle-class Americans voted for,” Obama wrote.

Republicans, citing rising premiums and other factors, had a different take on the health law in a press conference Wednesday.

“Families are hurting. [Democrats] broke the health care system,” House Speaker Paul Ryan said. “So we're going to make sure that we have an orderly transition to a better system so it can get back to what we all want, which is lower-cost health care, more choices so that families can actually get affordable health care at a decent price with more choices, more competition and not a costly government takeover.”

On Thursday, Trump tweeted that ObamaCare “was a lie from the beginning,” citing the faulty vow that anyone who liked their doctor could keep their doctor.

Trump tweeted: “time for Republicans & Democrats to get together and come up with a health care plan that really works -- much less expensive & FAR BETTER!”