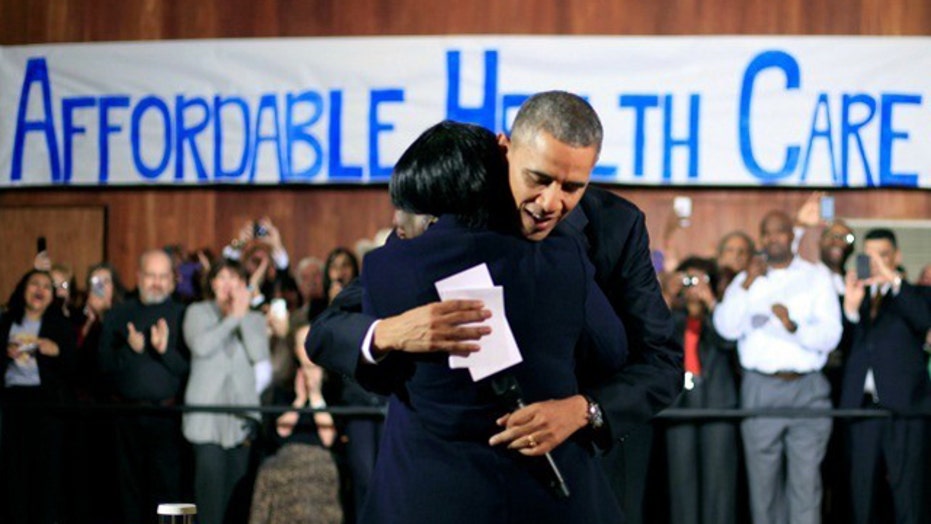 ObamaCare turns 5 - and the battles rage on

President Obama's signature achievement is the law of the land but nothing seems settled. #ObamaCare

ObamaCare is celebrating its fifth birthday Monday, but despite years of making headlines, it remains unpopular among Americans and the subject of continued attempts for repeal and reform.

While the Affordable Care Act has been law of the land for five years and most of the public still looks at it negatively — a surprise for a program that gives out subsidies. According to the Kaiser Family Foundation’s latest tracking poll, 43 percent view ObamaCare unfavorably, compared to 41 percent who see it favorably.

The public’s lackluster response to the landmark health reform has spurred ongoing efforts for either total repeal of ObamaCare, favored by the GOP, or incremental reforms to it.

But law’s survival, despite challenges ranging from the administration’s botched rollout of HealthCare.gov to Supreme Court cases challenging a number of provisions, has certainly heartened the law’s supporters. President Barack Obama lauded the health law’s milestone in a statement Sunday.

“The Affordable Care Act has been the subject of more scrutiny, more rumor, more attempts to dismantle and undermine it than just about any law in recent history,” President Obama said. “But five years later, it is succeeding — in fact, it’s working better than even many of its supporters expected.”

Part of the reason ObamaCare can still be so hotly debated is that many of the most noticeable provisions have only been in action for a year and a half. A flood of ObamaCare provisions hit the country on Jan. 1, 2014 — ObamaCare exchanges opened for business, millions of insurance cancellations went into effect, the individual mandate then required Americans to have health coverage.

Even now, though, some parts of the law are still a mystery. The first tax season with mandatory health coverage is underway. The employer mandate still hasn’t been fully enacted after being famously delayed in 2013. The Cadillac tax on high-cost employer plans, is expected to drastically increase workers’ health coverage costs, but won’t kick in until 2018.

Several more state-run ObamaCare exchanges are struggling with how to sustainably fund their own operations and states are even considering shutting down in favor of HealthCare.gov. And of course, the court system is still trying to figure out exactly what ObamaCare itself says in the Supreme Court’s latest case on the law, King v. Burwell.

It’s little surprise that the country is still debating whether the law has helped or hurt. The American Action Forum, a free-market think tank in Washington, is issuing a survey to gauge Americans’ reactions on the law’s fifth anniversary.

The administration points to nearly 11.7 million Americans who signed up (or were signed up for) exchange plans by the end of March. But others have had their plans canceled or their costs raised.

Even on the exchanges, costs are rising year-to-year. After subsidies, customers paid 20 percent more on average at HealthCare.gov than last year, according to federal data. Deductibles are going up, too: AAF found that in benchmark plans, some of the exchange’s most popular options, deductibles over $4,000 a year are increasingly popular.

Some people benefited from subsidies for their health coverage on exchanges, while the unlucky ones had their private insurance canceled due to requirements under the law.

It’s safe to say the debate about the heath care law will last far beyond its five-year anniversary.