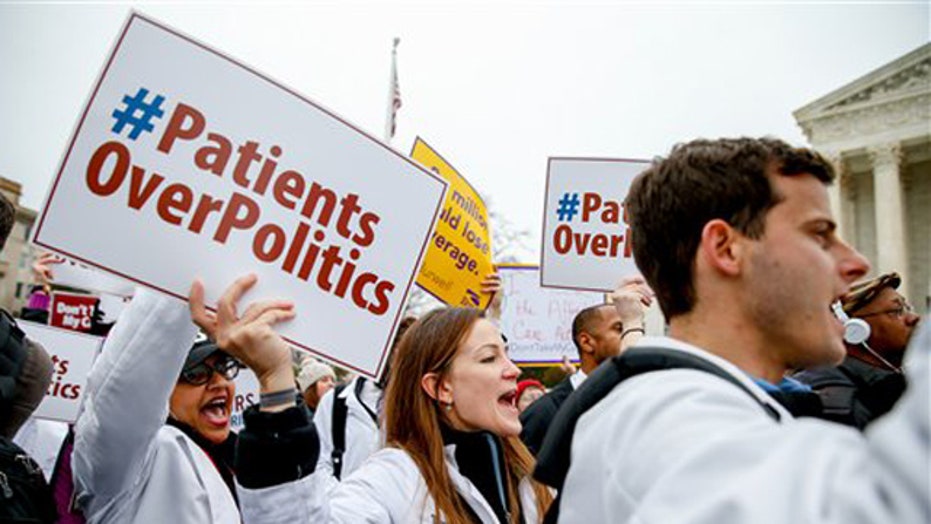 The upcoming Supreme Court decision on the Affordable Care Act could wipe out insurance for millions of people covered by the president’s health care plan, leaving states that didn't set up their own health care markets scrambling to subsidize coverage for those left uninsured.

Twenty-six of the 34 states that would be hardest hit by the ruling have GOP governors. Twenty-two of the 24 Senate seats that are up for re-election in 2016 are currently held by Republicans. What that means is that it’s the GOP – and not the White House –that’s working on damage control.

President Obama’s landmark legislation offers subsidized private insurance to those without access to it on the job. In the Supreme Court case, opponents of the law argue that its literal wording allows the government to subsidize coverage only in states that set up their own health insurance markets.

The justices will determine whether the law makes people in all 50 states eligible for federal tax subsidies -- or just those who live in states that created their own health insurance marketplaces. The question matters because about three dozen states opted against their own marketplace, or exchange, and instead rely on the U.S. Health and Human Services Department’s Healthcare.gov.

If the court rules against the Obama administration, insurance subsidies for people in those states would be in jeopardy.

If the court invalidates the subsidies in those states, the results would be “ugly,” former Kansas insurance commissioner Sandy Praeger told The Associated Press.

"People who are reasonably healthy would just drop coverage," she said. "Only the unhealthy would keep buying health care. It would really exacerbate the problem of the cost of health insurance."

Praeger, a Republican who retired this year, called it "a classic death spiral," using a term for market collapse.

In March, the Supreme Court appeared divided along ideological lines after hearing the challenge that, if struck down, could affect up to 8 million policy holders.

If the subsidies survive, the ACA will look like settled law to all but a few passionate opponents. However, if they are overturned, the shock could carry into next year’s elections.

Here are just a few of the potential consequences:

Around the time when the court announces its decision, insurers will be working to finalize premiums and plans for the coming year. Contracts with the government for 2016 health law coverage have to be signed by early fall. If the subsidies are overturned, insurers would have to tear up their projections about markets in more than half the states.

Populous states such as Texas, Florida, Ohio, Illinois, New Jersey, Georgia and Pennsylvania would be among those affected.

State lawmakers could mitigate the impact by setting up their own insurance markets, or exchanges. But that can't be done overnight.

States might try authorizing an exchange, and then contracting with the federal government to run it. But that sort of end-run might prompt lawsuits from opponents of the law.

In any case, most state legislatures will be out of session by the summer.

During arguments, Associate Justice Samuel Alito raised the possibility that the court might be able to delay the effective date of its decision. Even a delay through the end of this year wouldn't buy much time. Enrollment for 2016 health law plans is scheduled to start Nov. 1.

The health law was designed as a balancing act. Insurers can't turn people away because of health problems, but most healthy people are required to contribute to the insurance pool, and the government subsidizes most of the premium for low- to middle-income households.

Take away subsidies, and the other two parts become unstable.

The law's requirement to carry insurance, never popular, would probably become the biggest target for repeal.

"My guess is there would be overwhelming political support for the elimination of the individual mandate if people can't afford the premiums," said former Sen. Tom Daschle, D-S.D., who was an influential Obama adviser on health care.

Insurers would demand relief from provisions of the law intended to limit premium increases, or they might drop out of the insurance exchanges.

Many people still buy individual health care policies directly from an insurance company, bypassing the law's markets and paying the full cost. They tend to be small-business owners, self-employed professionals and early retirees.

But even they would not escape the tumult in states losing subsidies.

The health law created one big insurance pool in each state, combining customers who purchase their policies directly with those who buy through the government market. If healthy people exit the insurance exchanges in droves, premiums for those buying directly would go up. Some may be unable to afford the higher cost.

"It would set off cascading events," said Larry Levitt of the nonpartisan Kaiser Family Foundation. "The individual market would empty out as premiums rise significantly."


REPUBLICANS TO THE RESCUE?

Leading congressional Republicans have been walking a fine line, opposing the law in the Supreme Court case while pledging to protect consumers if their side wins.

If the subsidies are overturned, Republicans will first try blaming Obama and the Democrats for writing flawed legislation and then trying to paper over problems with regulations. Then they'll move ahead with a patch to appease angry constituents.

A bill introduced by Sen. Ron Johnson, R-Wis., would continue the subsidies for existing customers only on the federal exchange until September 2017. That would open a window for states to act, but it would ultimately leave the problem for the next president and Congress. Senate Majority Leader Mitch McConnell, R-Ky., is a co-sponsor.

Johnson's bill would repeal the requirements for individuals to have insurance and for larger employers to offer coverage to workers.

Obama is unlikely to accept any of those changes.

"The president is likely to veto whatever we would propose, because we don't have a willing partner," said Sen. John Barrasso, R-Wyo., leader of a GOP working group on health care.