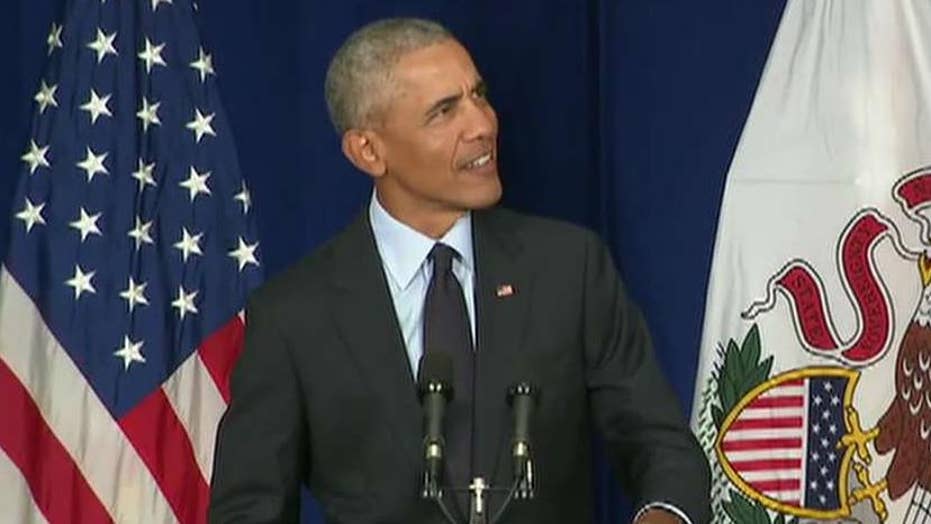 Former President Barack Obama once warned he would intervene to stop Sen. Bernie Sanders, I-Vt., from winning the Democratic presidential nomination, according to a new report that sheds light on Obama's personal views of the jam-packed primary field with no clear front-runner.

Obama has largely stayed on the sidelines to date, refraining from any endorsements though he has issued general warnings to the party to avoid calls for radical upheaval in their policy pitches. These warnings were seen as a swipe at candidates like Sens. Elizabeth Warren, D-Mass., and Sanders.

But a new Politico Magazine report gives a clearer picture of what Obama is worried about -- claiming he has said in private he'd speak out against Sanders if it looked like he could actually win.

"Back when Sanders seemed like more of a threat than he does now, Obama said privately that if Bernie were running away with the nomination, Obama would speak up to stop him," the report says. An Obama spokesperson, however, reportedly noted that the former president has stated that he would get behind the Democratic nominee regardless of who it is.

One adviser said that while they personally had no knowledge of this, the threat of a Sanders nomination would likely be cause for action.

"I can't really confirm that," the adviser said, regarding the possibility of Obama trying to stop Sanders. "He hasn't said that directly to me. The only reason I'm hesitating at all is because, yeah, if Bernie were running away with it, I think maybe we would all have to say something. But I don't think that's likely. It's not happening."

This aversion to Sanders would be in line with Obama's recent comments. At an Obama Foundation Summit event in October, Obama took aim at political "wokeness" and cancel culture.

"This idea of purity and you're never compromised and you're always politically woke, and all that stuff, you should get over that quickly," Obama said.

Weeks later, at a gathering of the Democracy Alliance, Obama warned 2020 Democratic presidential hopefuls that most voters do not want to “tear down the system.”

Obama dismissed far-left positions as not being popular among average Americans, even if they make waves on social media.

“Even as we push the envelope and we are bold in our vision, we also have to be rooted in reality and the fact that voters, including the Democratic voters and certainly persuadable independents or even moderate Republicans, are not driven by the same views that are reflected on certain, you know, left-leaning Twitter feeds,” Obama said.

The same Politico report, meanwhile, addressed Obama's relationship with Biden, whom he has not yet endorsed, despite Biden serving as vice president in his administration -- and routinely touting their relationship on the stump.

The Politico piece said Obama recalled to one candidate who came to him for advice how he himself had a bond with the voters that has since faded. He reportedly added, “And you know who really doesn’t have it? Joe Biden.”