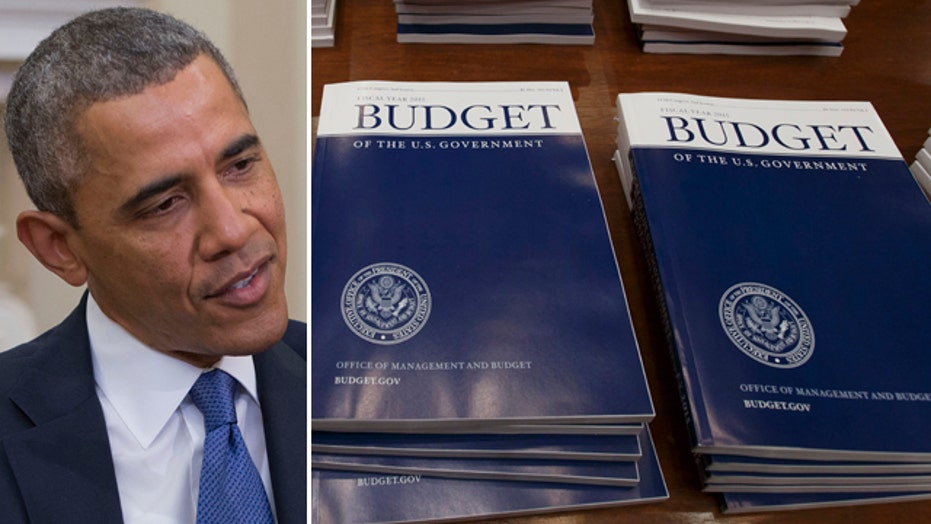 Will Obama's budget fly with Congress?

The plan sent to Congress hammers the president's theme of "opportunity" for Americans.

"It is a road map for creating jobs with good wages and expanding opportunity for Americans," Obama said in Washington.

But Obama's almost $4 trillion budget plan is likely to have a short shelf life.

Coming just three months after Congress and the White House agreed to a two-year, bipartisan budget pact that has already set the parameters for this election year's budget work, Democrats controlling the Senate have already announced they won't advance a budget this year. Instead, they will skip ahead to the annual appropriations bills for 2015, relying on new spending "caps" set by December's budget deal that provide $56 billion less than what Obama wants in 2015.

Obama's spending plan divides the extra money equally between the Pentagon and domestic initiatives like boosting manufacturing hubs, job training and preschool programs and cutting energy waste. Republicans are likely to balk at the idea, which would be paid for by curbing special interest tax breaks and making spending cuts elsewhere in the budget.

"After years of fiscal and economic mismanagement, the president has offered perhaps his most irresponsible budget yet," House Speaker John Boehner, R-Ohio, said in a written statement. "American families looking for jobs and opportunity will find only more government in this plan. Spending too much, borrowing too much, and taxing too much, it would hurt our economy and cost jobs."

Obama also announced a four-year, $302 billion plan to boost spending on highways, rail projects and mass transit. Half of the initiative would be financed through corporate taxes. Funding for highway and mass transit projects expires at the end of September, and there's bipartisan interest in finding a supplemental funding stream to augment stagnant revenues from the $18.4 cents-per-gallon gasoline tax.

Obama's budget arrives after a tumultuous year that began with Obama muscling through a 10-year $600 billion-plus tax increase on upper-bracket earners. Feeling stung, Republicans refused to yield on about $80 billion in automatic spending cuts that began in March. Then, conservatives in the GOP forced a 16-day partial government shutdown over funding to implement the nation's new health insurance program. The small-bore, two-year budget deal struck by Rep. Paul Ryan, R-Wis., and Sen. Patty Murray, D-Wash., emerged from the wreckage to alleviate the toughest automatic cuts.

Obama's blueprint presents his vision for boosting job growth and favored initiatives like education, with no design or expectation of luring Republicans into more budget negotiations in this election year. The White House announced earlier Obama was dropping a plan opposed by most Democrats in his budget proposal a year ago to slow Social Security cost of living increases.

The budget also will flesh out a plan Obama announced in his State of the Union address to expand the earned income tax credit for childless workers.

Republicans are sure to brush aside most of Obama's new initiatives. Ryan released a report Monday criticizing many federal anti-poverty programs, saying they should be redesigned to better help the poor escape poverty. It found that many poor people have little incentive to find work or work more because higher incomes mean lower benefits.

The success that Washington has had in curbing spending over the past several years has come mostly at the expense of "discretionary" spending for agency operating budgets approved by Congress each year. The $521 billion defense budget for this year amounts to 3.5 percent of the size of the economy, according to the Congressional Budget Office, down from 5.4 percent of gross domestic product 40 years ago.

Discretionary spending on nondefense programs has dropped from 3.9 percent in 1974 to 3.4 percent today. Meanwhile, autopilot spending on benefit programs like Social Security, Medicare, food stamps and insurance subsidies under the new health care law are growing rapidly as a percentage of the economy.

Obama's budget does little to arrest these trends. And it arrives as dropping deficits have sapped much of Washington's urgency for tackling the government's fiscal problems. The deficit fell to $680 billion last year — still large but far smaller than the $1 trillion-plus deficits that plagued his first term.

Obama's austere request for the Pentagon, including cuts to Army personnel, the National Guard and the much-criticized littoral combat ship and a move to retire the Air Force's A-10 fighter, has already provoked howls of outrage from defense hawks. Sen. Lindsey Graham, R-S.C., said Obama's proposal "guts our defense."

Obama will recommend tax changes that would generate billions in revenues to help pay for those initiatives. They include curtailing what the administration views as tax avoidance schemes by U.S. companies with profits earned overseas and by foreign-owned companies with operations in the United States.

One measure, according to administration officials, would limit the ability of companies to take advantage of differences in tax rules from country to country. A second would restrict the ability of multinational corporations to assign much of their debt to U.S. operations to take advantage of U.S. interest deductions. A third would classify as taxable the income from certain digital transactions that have escaped U.S. taxation.