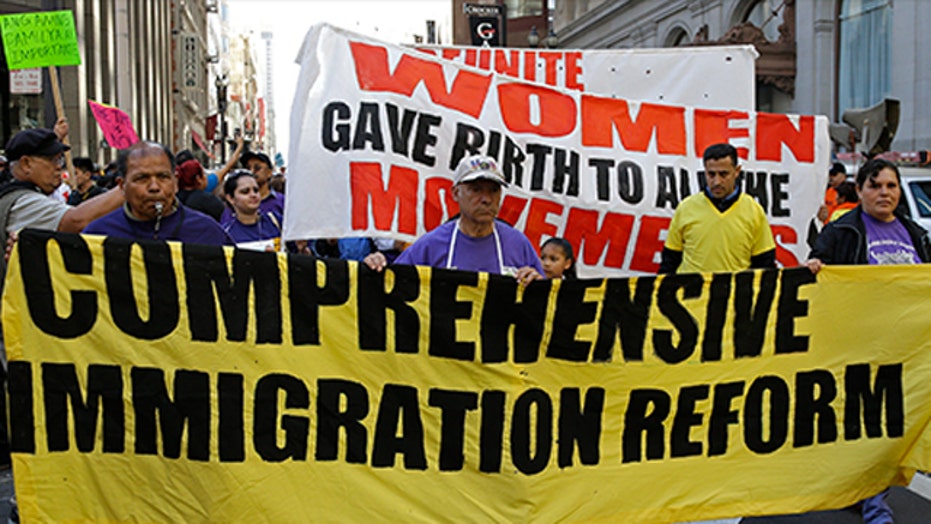 Immigration reform put on hold until after midterm election

President Obama has abandoned his pledge to reform U.S. immigration policy by the end of summer and will instead wait until after the November congressional elections.

Obama concluded that using executive action to circumvent Congress during the campaign season would politicize the issue and hurt future efforts to pass comprehensive immigration reform.

The decision is welcome news for Democratic senators trying to win reelection in conservative states -- and help their party fend off a strong GOP effort to take control of the upper chamber.

However, the delay is also a setback for immigration reform advocates, including Big Business and liberals.

In an interview set to air Sunday on NBC's "Meet The Press," Obama admitted that politics had played a role in his decision, claiming that a partisan fight this summer over how to deal with an influx of unaccompanied minors at the southern border had created the impression of crisis.

Two White House officials told the Associated Press, on the condition of anonymity, that Obama made his decision Friday as he returned to Washington from a NATO summit in Wales.

They said Obama called a few allies from Air Force One and informed them of his decision, and that the president made more calls from the White House on Saturday.

The officials said Obama had no specific timeline to act, but that he still would take his executive steps before the end of the year.

In a Rose Garden speech on June 30, Obama said he had directed Homeland Security Secretary Jeh Johnson and Attorney General Eric Holder to give him recommendations for executive action by the end of summer. Obama also pledged to "adopt those recommendations without further delay."

Many conservatives and other Obama critics thought Obama would act while Congress was on August break.

Obama faced competing pressures from immigration advocacy groups that wanted prompt action and from Democrats worried that acting now would energize Republican opposition against vulnerable Senate Democrats. Among those considered most at risk were Democratic Sens. Mark Pryor of Arkansas, Mary Landrieu of Louisiana and Kay Hagan of North Carolina.

Republicans need to win a net total of six seats to take control of the Senate.

Obama advisers were not convinced that any presidential action would affect the elections. But the officials said the discussions around the timing grew more pronounced within the past few weeks.

Ultimately, the advisers drew a lesson from 1994 when Democratic losses were blamed on votes for gun control legislation, undermining any interest in passing future gun measures.

White House officials said aides realized that if Obama's immigration action was deemed responsible for Democratic losses this year, it could hurt any attempt to pass a broad overhaul later.

The Democrat-controlled Senate has passed comprehensive immigration-reform legislation, largely on what to do about the roughly 11 million people now living illegally in the United States.

However, the Republican-control House has delayed such a vote, in large part over concerns about first securing the southern U.S. border and that a path to citizenship would be perceived as granting amnesty.

House Speaker John Boehner, R-Ohio, informed Obama earlier this year that the chamber would not act in 2014. That led Obama to declare he would act on his own.

In recent months, partisan fighting erupted over how to address the increased flow of unaccompanied minors from Central America at the U.S. border with Mexico. The officials said the White House had not envisioned such a battle when Obama made his pledge June 30.

Obama asked for $3.7 billion to address the border crisis. The House, however, passed a measure that gave Obama only a fraction of what he sought and made it easier to deport the young migrants arriving at the border, a provision opposed by Democrats and immigration advocates. In the end, Congress adjourned without a final bill.

The number of minors caught alone illegally crossing the Mexican border into the United States has been declining since June. That decrease and Congress' absence from Washington during August has taken attention away from the border for now.

Still, the dispute over how to deal with the surge of Central American border crossers threatened to spill over into the larger debate over immigration and the fate of the millions of immigrants in the United States who either entered illegally or overstayed their visas and have been in the U.S. for some time.

During a news conference Friday in Wales, Obama reiterated his determination to act on his own even as he avoided making a commitment on timing. He also spelled out ambitious objectives for his executive actions.

Obama said that without legislation from Congress, he would take steps to increase border security, upgrade the processing of border crossers and encourage legal immigration. He also said he would offer immigrants who have been illegally in the United States for some time a way to become legal residents, pay taxes, pay a fine and learn English.

"I want to be very clear: My intention is, in the absence of ... action by Congress, I'm going to do what I can do within the legal constraints of my office, because it's the right thing to do for the country," he said.

The extent of Obama's authority is a matter of debate among legal experts and in Congress. Some Democrats say it would be best for Obama to let Congress act.

But pro-immigrant groups called on Obama to stick to his end-of-summer deadline, and weighed in with a strongly worded appeal to him on Friday.

"Being a leader requires making difficult and courageous decisions," said the letter, whose signers included the National Council of La Raza and the League of United Latin American Citizens. "It is your time to lead, Mr. President."