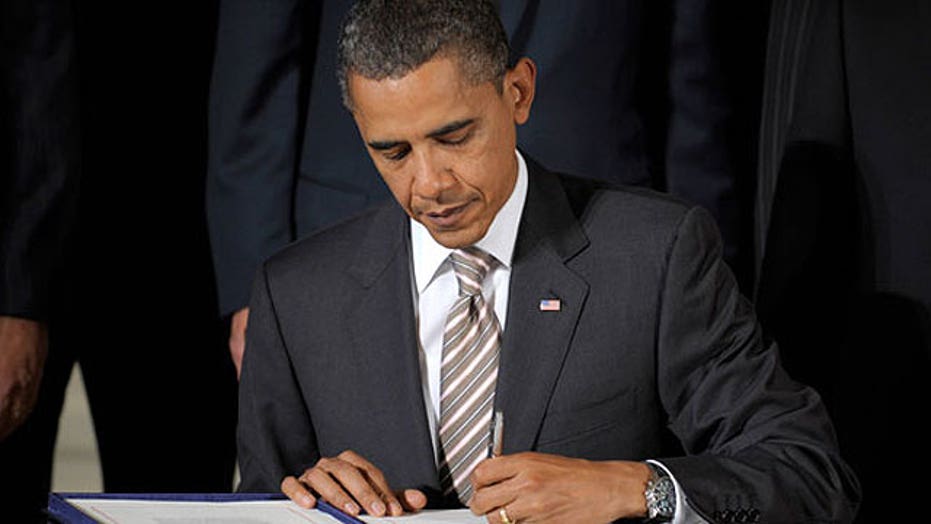 Will Obama use veto pen to counter GOP-led Congress?

Katrina Pierson and Jessica Ehrlich on the political outlook for 2015

The new Congress hasn't yet been sworn in, but President Obama already is warning he plans to use his veto pen to counter initiatives from the incoming Republican majority.

Obama, despite his near-constant friction with congressional Republicans the last few years, rarely has used the presidential veto -- in part because legislation he didn't like typically died in the Democrat-controlled Senate before reaching his desk.

But with Republicans taking charge of the Senate next month and building their majority in the House, Obama said in an NPR interview he's dusting off the veto pen.

The agenda for the incoming Republican majority indeed could set up a series of veto stand-offs.

Among the top two items for the new Senate are a bill to force approval of the controversial Keystone XL pipeline, and one imposing new sanctions on Iran. Though the sanctions bill could disrupt delicate negotiations over the country's nuclear program, Sen. Mark Kirk, R-Ill., told Fox News on Sunday that the Senate might be able to muster a "veto-proof majority."

It's unclear whether Obama would veto a Keystone bill, though he has urged lawmakers to let the review process run its course.

In the interview with NPR, the president suggested he would mostly use his veto pen to block efforts to unravel existing laws and regulations pushed by his administration.

At the same time, he said, "what I'm hopeful about -- and we saw this so far at least in the lame duck -- is a recognition by both Speaker Boehner and Mitch McConnell that people are looking to them to get things done and that the fact that we disagree on one thing shouldn't prohibit us from getting progress on the areas where there's some overlap."

"While construction of the Keystone XL pipeline and other bipartisan job creation legislation was blocked in a Democrat-led Senate, that will begin to change in January with Republicans in charge," he said in a statement. "Bipartisan jobs bills will see the light of day and will make it to the president's desk, and he'll have to make decisions about ideology versus creating jobs for the middle class. There's a lot we can get done together if the president puts his famous pen to use signing bills rather than vetoing legislation his liberal allies don't like."

Since taking office in 2009, Obama has only vetoed legislation twice, both in fairly minor circumstances.

Obama's notice to the GOP came as he sought to set the tone for a year in which Congress and the president are on a near-certain collision course. Buoyed by decisive gains in last month's midterm elections, Republicans are itching to use their newfound Senate majority to derail Obama's plans on immigration, climate change and health care, to name a few.

To overturn Obama's veto, Republicans would need the votes of two-thirds of the House and Senate. Their majorities in both chambers are not that large, so they would still need to persuade some Democrats to defy the president.

But Obama said he was hopeful that at least on some issues, that won't be necessary, because there's overlap between his interests and those of congressional Republicans.

Potential areas for cooperation include tax reform and global trade deals -- both issues where Obama and Republicans see at least partially eye to eye. Conversely, the likeliest points of friction surround Environmental Protection Agency regulations, the Keystone XL pipeline and Obama's unilateral steps on immigration, which let millions of people in the U.S. illegally avoid deportation and get work permits.

In the interview, recorded before Obama left Washington earlier this month for his annual Hawaii vacation, Obama also offered his most specific diagnosis to date of why Democrats fared so poorly in the midterms. He said he was "obviously frustrated" with the results.

"I think we had a great record for members of Congress to run on and I don't think we -- myself and the Democratic Party -- made as good of a case as we should have," Obama said. "And you know, as a consequence, we had really low voter turnout, and the results were bad."