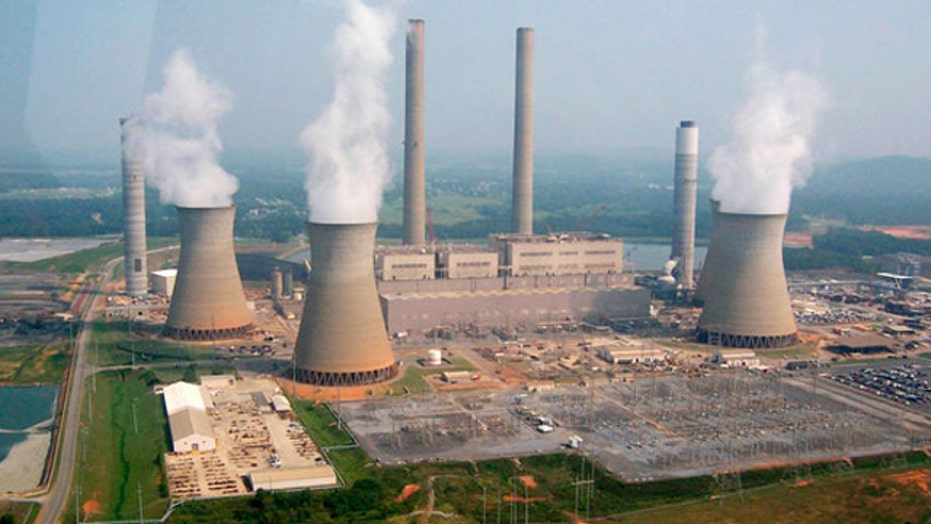 President Obama on Saturday tried to bolster public support for new rules his administration will announce next week on coal-firing power plants, arguing their carbon emissions are a national health crisis – beyond hurting the economy and causing global warming.

The cost of carbon pollution “can be measured in lost lives” and roughly “100,000 asthma attacks and 2,100 heart attacks will be avoided” in just the first year that the standards go into effect, Obama said in the address, recorded Friday at the Children’s National Medical Center, in Washington, D.C., where he visited young asthma patients.

The new, unprecedented rules, which sidestep Congress, are set to be announced Monday and reportedly attempt to cut emissions by as much as 25 percent over 15 years.

Obama’s attempt to reduce greenhouse gases, which he and supporters blame for global warming, also are being met with strong opposition from the energy industry, big business and congressional Democrats and Republicans, who argue Obama’s green-energy agenda is tantamount to a “War on Coal.”

The U.S. Chamber of Commerce argues the rule will kill jobs, increase electricity prices and close power plants across the country.

The group is releasing a study that finds the rule change would result in the loss of 224,000 jobs every year through 2030 and impose $50 billion in annual costs.

Many of the Democrats who are raising concerns represent coal-producing states and face tough 2014 reelections bids.

Among them is West Virginia Democratic Rep. Nick Rahall, whose state gets 96 percent of its power from coal. Rahall said Thursday that he didn't have specific details about the rule but "from everything we know we can be sure of this: It will be bad for jobs."

The rule will be executed at the state level, setting goals for states on reducing carbon emissions but also giving them flexibility on how to meet the new standards.

Still, putting the new rule into effect is expected to be a long, complicated process that could extend past the 2016 presidential elections and the end of Obama’s second term in January 2017.

The process includes a one-year-long public comment period. And the president is using a 30-year-old law that was not intended to regulate the gases blamed for global warming.

He was forced to rely on the Clean Air Act after he tried and failed to get Congress to pass a new law during his first term. When the Republicans took over the House, the goal became impossible.

While coal-firing plants produce about 40 percent of the electricity in the county, they also create about one-third of the carbon pollution, which makes them the country's second-largest emitter of greenhouse gases.

"There are no national limits to the amount of carbon pollution that existing plants can pump into the air we breathe. None," Obama said Saturday in the weekly radio and Internet address.

"We limit the amount of toxic chemicals like mercury, sulfur, and arsenic that power plants put in our air and water. But they can dump unlimited amounts of carbon pollution into the air. It's not smart, it's not safe, and it doesn't make sense."

His rule will prescribe technological fixes or equipment to be placed on existing plants and require new ones to capture some of their carbon dioxide and bury it underground. States will be allowed to require power plants to make changes such as switching from coal to natural gas or enact other programs to reduce demand for electricity and produce more energy from renewable sources.

They also can set up pollution-trading markets as 10 other states already have done to offer more flexibility in how plants cut emissions.