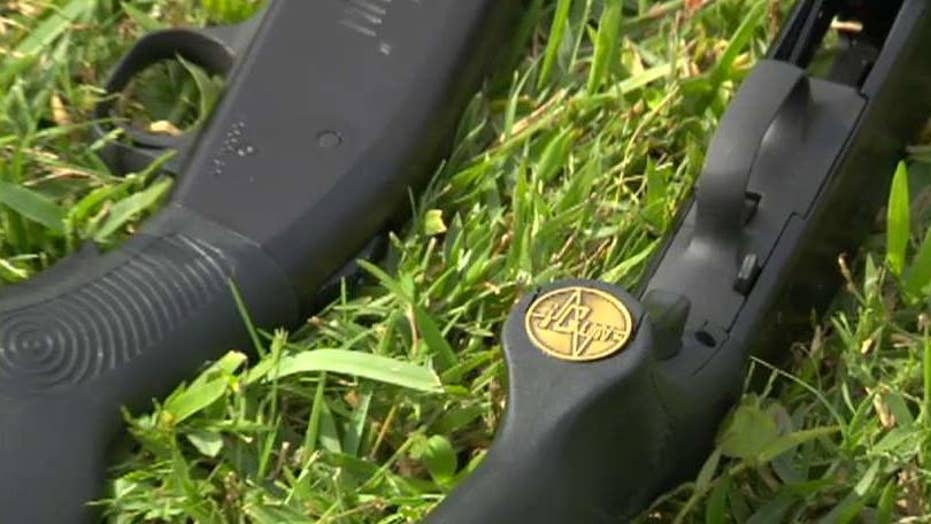 The Obama administration is locked and loaded for a fresh push on gun control initiatives – reportedly moving to advocate for so-called "smart gun" technology as early as Friday, despite concerns from the gun lobby.

Politico reports President Obama is set to release findings on the technology from a multi-agency review, and White House senior adviser Valerie Jarrett was previewing the material to a select set of groups on Thursday.

White House Press Secretary Josh Earnest confirmed to reporters that the administration would be making an announcement on Friday, without going into detail.

“We'll have more that we can talk about tomorrow," he said. "… Under discussion was exploring what kind of technology could be effectively used to make guns safer. So this is something that that a variety of federal agencies have reviewed and they'll have some findings to share.”

“Smart-gun” technology overhauls guns so they can only be fired by authorized users. The multi-agency review was ordered as part of Obama’s Jan. 4 executive action on guns.

The National Rifle Association and other gun groups do not necessarily oppose the technology itself, but are concerned about any new mandates from the government requiring it. And law enforcement groups have voiced concerns about the reliability of the tech, and whether it can be trusted when needed most.

Politico quoted a source saying a mandate is not being considered at the moment – but the roll-out of the review could fuel those concerns. Earnest would not say Thursday whether the announcement would entail simply findings or some kind of requirement.

The president’s January order had directed the departments of Defense, Justice and Homeland Security to prepare a report “outlining a research-and-development strategy designed to expedite the real-world deployment of such technology for use in practice.”

The Department of Justice’s National Institute of Justice now plans to announce in the Federal Register on Friday that it is seeking “an objective demonstration of the reliability of firearms available today with advanced gun safety technology integrated into the firearm.”

Most of the concerns revolve around the safety of the technology and how it will be tested.

“Police officers in general, federal officers in particular, shouldn’t be asked to be the guinea pigs in evaluating a firearm that nobody’s even seen yet,” James Pasco, executive director of the Fraternal Order of Police, told Politico.

During a town hall days after his executive actions, Obama erroneously claimed smart gun technology “has not been developed primarily because it has been blocked by the National Rifle Association (NRA) and firearms manufacturers.”

The NRA does not oppose the technology. But in responding to the president’s controversial January executive action, the group’s Institute for Legislative Action said the private market, not the government, should drive its development.

“Although NRA is not opposed to the development of new firearms technology, we do not believe the government should be picking winners and losers in the marketplace,” the statement said.

While the administration may not be pushing an executive order mandating the purchase of smart guns, Second Amendment advocates fear a slippery slope.