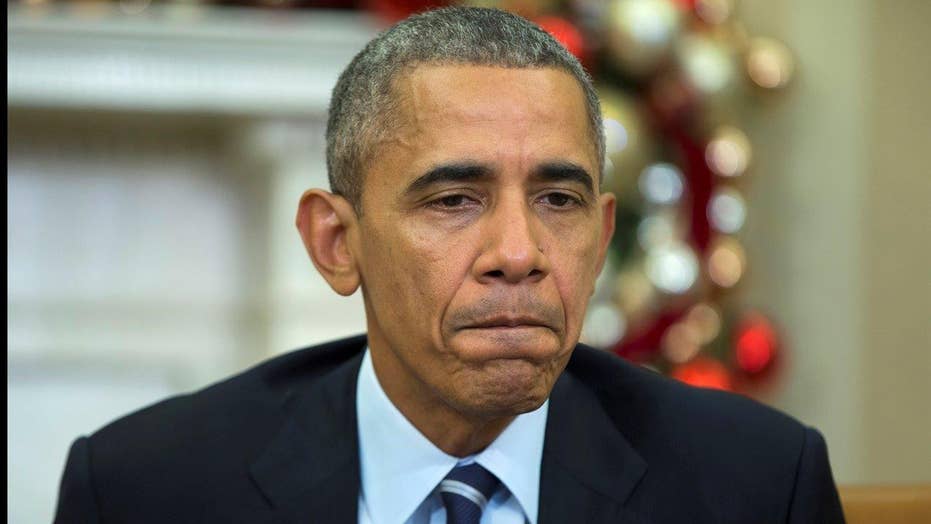 Obama: Thoughts and prayers are with San Bernardino victims

President says motive remains unclear, vows to get to the bottom of the mass shooting and urges action to make it harder for individuals who mean harm to get access to weapons

President Obama said Thursday that it was possible that Wednesday’s mass shooting in San Bernardino that left 14 dead was a terror attack, but that “we do not yet know,” and said that the incident could be “workplace related” – before calling on legislatures to make it harder for potential shooters to get access to weapons.

The president's comments came the morning after Syed Rizwan Farook and Tashfeen Malik burst into a social services office in tactical gear and assault rifles, killing 14 at an office gathering before dying hours later in a shootout with police.

As details emerged about the shooters, speculation mounted that the shooting was a premeditated act of jihad.

Speaking to reporters in the Oval Office, Obama said that “we do not yet know why this terrible event occurred.”

“It is possible that this was terrorist-related but we don’t know,” Obama said. “It’s also possible that this was workplace related and until the FBI has been able to conduct what is going to be a large number of individuals, until we understand the nature of the workplace relation between the individual and his superiors, because he worked with the organization where this terrible shooting took place, until all the social media and electronic info has been exploited, we’re just not going to be able to answer those questions.”

Despite his insistence that it was too early to jump to conclusions, he spoke about “the prevalence of these kind of mass shootings in this country” and called on legislatures to act on keeping guns out of the hands of those who may want to commit mass shootings.

“Because right not it’s too easy, and I think we’re going to have to search ourselves as a society that we can take basic steps to make it harder, not impossible, but harder for those individuals to get access to weapons,” Obama said.

Obama's comments came after remarks made by Attorney General Loretta Lynch earlier in the day, who pledged her support to the people of San Bernardino in the wake of the atrocity.

"As this investigation unfolds we will be offering any and all assistance necessary to local authorities and to the people of San Bernardino who have been so profoundly affected by this unspeakable crime," Lynch said.

"Whatever the results of this investigation – we don’t know a lot right now, but one thing is clear: that violence like this has no place in this country and in this nation," she said to applause at a press conference.