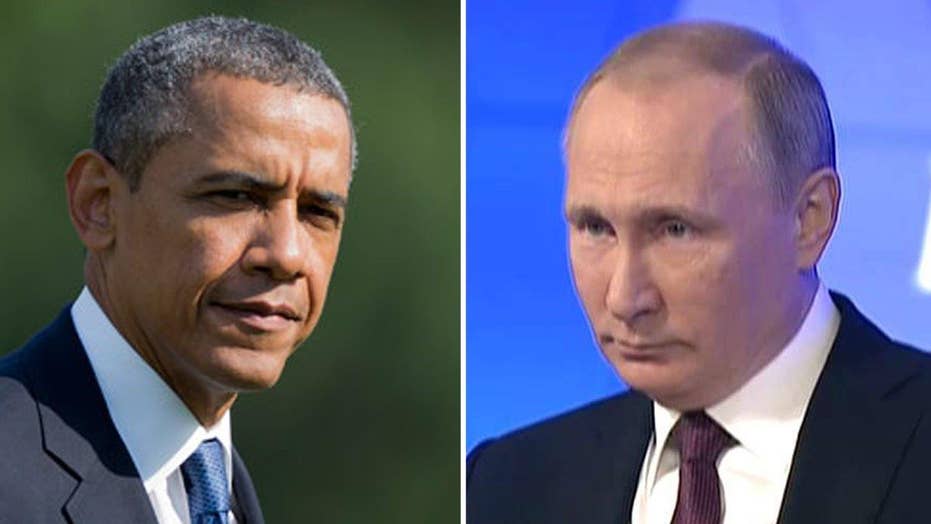 President Obama expelled 35 Russian intelligence officials and imposed sanctions as part of a “necessary and appropriate response” to Russia’s alleged interference in November’s elections Thursday. But experts question whether it is strong enough to deter Russian President Vladimir Putin.

“I don't think they will have much impact at all,” said former United Nations ambassador John Bolton Friday morning in an interview on Fox News’ “Fox & Friends.”

Bolton, who was under consideration to lead the State Department in a Trump administration, said Russia’s actions were an “attack on our constitutional system” and “it is not enough to say, and people should be very careful about this, to say, well, it didn't actually have an impact on the election.”

Republican Sens. John McCain of Arizona and Lindsey Graham of South Carolina issued a joint statement characterizing the sanctions as “long overdue” that was a “small price for Russia to pay for its brazen attack on American democracy.

McCain, who is chairman of the Senate Armed Services Committee, has schedule a hearing on foreign cyber threats for next Thursday and intends to work to toughen the sanctions.

Russian officials initially condemned the sanctions and promised to retaliate. However, Russian President Vladimir Putin subsequently issued a statement that said he was “reserving the right to retaliate.”

The statement read further that Russia “would nt stoop to the level of ‘kitchen’ irresponsible diplomacy.”

Olga Oliker, director of Eurasia program at the Center for Strategic and International Studies, says retaliatory measures will have an immediate impact by demonstrating “what can be done,” such as imposing sanctions on firms that deal with Russian intelligence.

“In terms of the measures responding to harassment of US diplomats, the real proof of the pudding will be Russians actions going forward,” she told FoxNews.com.

Other security experts concur the Obama’s decision to respond sends a message, but the extent to which it will affect Putin remains unclear.

“I am not sure we will see impact in terms of Russia backing down. This is more of a public move from the Obama administration to serve notice to them that we will respond to cyber attacks,” Anup Ghosh, founder & CEO of the Virginia-based cybersecurity firm Invincea, Inc. told FoxNews.com

“I expect Putin to continue with his propaganda campaign and attempts to influence the discussion by manipulating public opinion. At the same time, he will be welcoming of the Trump administration,” he added.

The executive order largely relied on findings in a joint Department of Homeland Security and Federal Bureau of Investigation report which claimed Russian civilian and military services were “part of an ongoing campaign of cyber-enabled operations directed at the U.S. government and its citizens.”

According to the report, the target of Russia’s cyber offensive was not limited to the Democratic National Committee (DNC). The campaign sought to infiltrate government organizations, critical infrastructure entities, think tanks, universities, political organizations, and corporations.

“It uses big font and pictures and leaves certain holes in it that are bigger than the paper it is written on. Frankly, it raises more questions than it answers” about Russia’s activities.”

Zeldin believes the intelligence briefings President-elect Trump receives next week could help to shape his strategy toward dealing with Putin.

Experts say the direction Donald Trump chooses to take toward Russia is likely to determine whether Putin is deterred from further aggressive behavior.

Susan Hennessey, a Brookings Fellow in National Security Law, tells FoxNews.com that Trump has the authority to overturn the executive order should he choose to do so.

But, she adds, “to do so would be politically costly because Congress, including majority of Republicans, favor taking stronger action against Russia.”