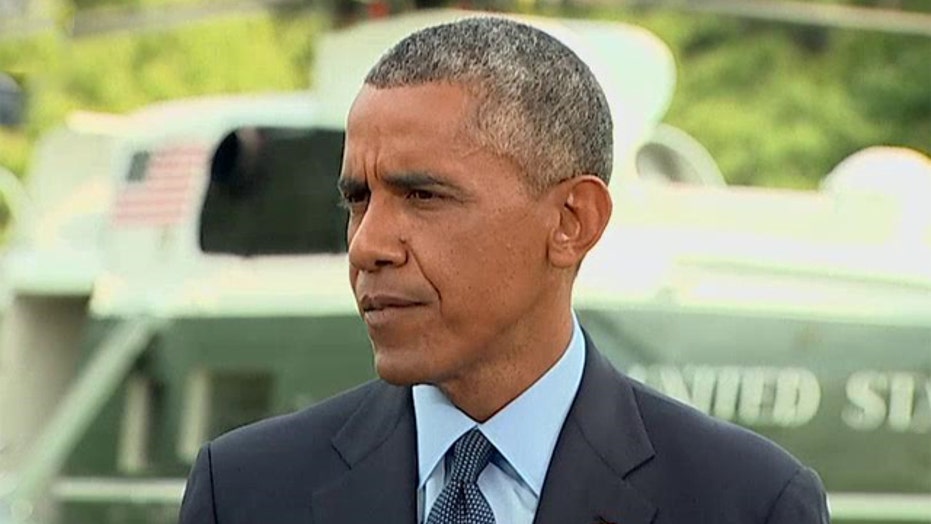 President Obama on Tuesday announced expanded U.S. sanctions on Russia, joining the European Union in a coordinated effort to use Russia's economy as leverage to compel Moscow to stop fueling the deadly conflict in Ukraine.

"Russia is once again isolating itself from the international community," Obama said, claiming that the U.S. sanctions will have an "even bigger bite" thanks to action by the Europeans.

The coordinated sanctions by the U.S. and European Union were aimed at increasing pressure on Russian President Vladimir Putin to end his country's support for separatists in eastern Ukraine whom the West blames for taking down a Malaysian airliner nearly two weeks ago. Obama and U.S. allies also warned that Russia was building up troops and weaponry along its border with Ukraine.

Europe's actions were particularly significant given that the continent has a far stronger economic relationship with Russia than the U.S. does. Until this week, the EU sanctions had lagged behind American penalties, in part because of leaders' concerns about a negative impact on their own economies.

But Europe's calculus shifted sharply after a surface-to-air missile brought down the passenger jet, killing nearly 300 people including more than 200 Europeans. The new European penalties include an arms embargo on Moscow and a ban on the unapproved sale to the Russians of technology that has dual military and civilian uses or is particularly sensitive, such as advanced equipment used in deep-sea and Arctic oil drilling.

Obama said the U.S. sanctions would hit the finance, arms and energy sectors of Russia's economy. Among the U.S. sanctions, according to the Treasury Department, are U.S. penalties that target the Bank of Moscow, the Russian Agricultural Bank and VTB Bank. Also listed on the Treasury designation is the United Shipbuilding Corp., which is based in St. Petersburg, Russia.

Obama said the U.S. is also blocking the export of certain goods and technologies to the Russian energy sector, and suspending credit "that encourages exports to Russia and financing for economic development projects in Russia."

In making the case for the additional steps, Obama said Russia has continued to support the separatists, "and encourage them and train them and arm them." He said forces inside Russia are launching artillery strikes into Ukraine, which he called a "major violation of Ukraine's sovereignty."

He also said Russia continues to build up its own forces near the border.

The new EU sanctions mirror steps announced by the U.S. the day before the Malaysian airliner was shot out of the sky. The White House has been pressing Europe in recent days to bring its penalties in line with the U.S., both to increase the economic pressure on Moscow and present a united Western front.