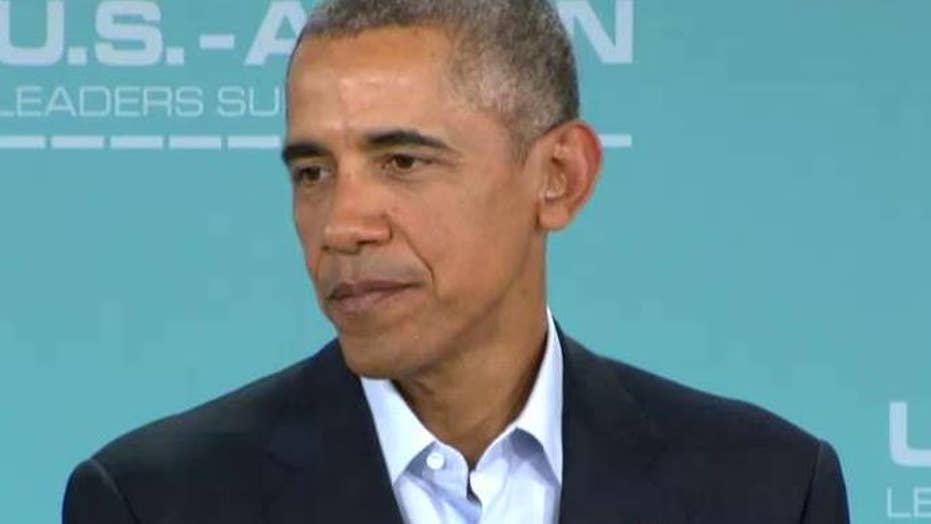 President Obama fired back Tuesday at Senate Republicans pre-emptively threatening to block his eventual nominee to succeed the late Justice Antonin Scalia, saying at a press conference that the Senate has “more than enough time” to consider his pick and he intends to press ahead.

“The Constitution is pretty clear about what is supposed to happen now,” Obama said. “When there is a vacancy on the Supreme Court, the president of the United States is to nominate someone. The Senate is to consider that nomination.”

Obama, in his most extensive remarks on the vacancy since the 79-year-old Scalia was found dead at a Texas ranch on Saturday, rejected widespread calls by Republican lawmakers and 2016 candidates to defer to the next president to fill Scalia’s seat.

“There is no unwritten law that says that it can only be done on off-years. That’s not in the constitutional text,” Obama said, blasting what he called an “obstructionist” Senate.

The president has found himself in an awkward position, though, as he scolds Republicans over threats to block his nominee – since Obama, as a U.S. senator, tried in 2006 to filibuster the nomination of Samuel Alito, who ultimately was confirmed. Asked about that seeming discrepancy on Tuesday, Obama did not answer directly. He noted that senators are sometimes worried about primary elections and a backlash from supporters, and take “strategic decisions.” But he brushed off his own opposition to Alito, saying he’s on the bench now, “regardless of which votes particular senators have taken.”

Obama held the press conference at the close of a summit in California with leaders of Southeast Asian nations.

It came as he’s facing an already-heated battle back in Washington over his potential pick to replace Scalia – before he has even announced his nominee.

Senate Republicans want Obama’s successor to fill the vacancy, and some are threatening to oppose any Obama nominee. “The next Court appointment should be made by the newly-elected president,” Sen. Pat Toomey, R-Pa., said in a statement Monday.

Republican National Committee Chairman Reince Priebus said push to  let Obama’s successor to fill the vacancy "is not about the person," but "about the court."

"The American people‎ should have a voice in the selection of their next Supreme Court Justice by allowing this issue to be front and center in this year’s election," he said. "As Democrats have already admitted, their breach of decades of precedent is all about scoring political points.”

But Obama says he will fulfill his constitutional duty and nominate a replacement in due time.

Suggesting he would not use a single-issue litmus test in selecting his nominee, Obama said Tuesday whomever he chooses will be “indisputably” qualified.

At the same time, he said he understands the “stakes,” bluntly acknowledging the next justice “would be a deciding vote” in a divided court.

Later asked if the public should assume he is likely to choose a moderate, Obama curtly responded, “No.” He then elaborated, saying: “I don’t know where you found that. You shouldn’t assume anything … other than they’re going to be well-qualified.”

He also suggested he was not considering a controversial recess appointment, but did not definitively rule it out, either.

Obama’s Democratic allies have blasted Republicans for their recent statements on the court battle.

"By ignoring its constitutional mandate, the Senate would sabotage the highest court in the United States and aim a procedural missile at the foundation of our system of checks and balances," Senate Minority Leader Harry Reid, D-Nev., said in a scathing op-ed in Tuesday's Washington Post.

A key Republican senator, though, left open the possibility of at least holding a confirmation hearing.

At Tuesday’s press conference, Obama also weighed in on the 2016 race to succeed him in the White House. He reprised his criticism of the Republican candidates, and even seemed to take a shot at Florida Sen. Marco Rubio for allegedly “running away” from a comprehensive immigration reform bill.

But on the Democratic primary battle between Hillary Clinton and Bernie Sanders, he declined to comment extensively.

“Let’s see how this thing plays itself out,” he said, adding: “Ultimately, I will probably have an opinion on it.”

On foreign policy, Obama also said he's under no illusions that a ceasefire negotiated for Syria will bring lasting peace to the "shattered" nation.

Obama and leaders of the Association of Southeast Asian Nations, meanwhile, spent the session in California Tuesday trading views on China's territorial claims to disputed water of the South China Sea, moves that have sounded international alarms and heightened tensions with some association members.

Counterterrorism, a growing concern in the Asia-Pacific region, was also on the agenda.

“Freedom of navigation must be upheld,” Obama said Tuesday, following the first ASEAN-only summit held in the U.S.