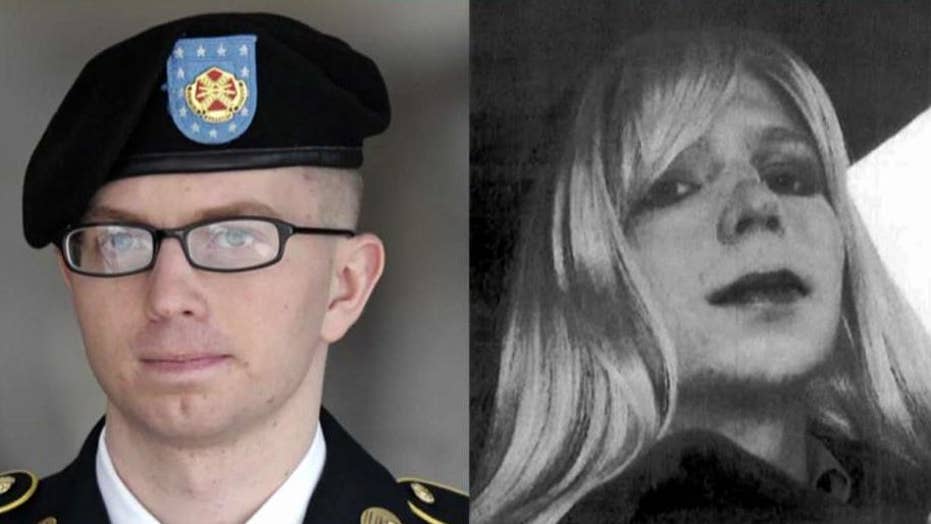 The White House said that Manning is one of 209 inmates whose sentences Obama is shortening. Obama is also pardoning 64 people, including retired Gen. James Cartwright, who was charged with making false statements during a probe into disclosure of classified information.

Manning is more than six years into a 35-year sentence at the military prison at Fort Leavenworth, Kansas for leaking classified government and military documents to the anti-secrecy website WikiLeaks. Her sentence is now set to expire May 17.

Manning was known as Bradley Manning at the time of her 2010 arrest, but revealed after being convicted of espionage that she identifies as a woman.

Manning accepted responsibility for leaking the material to WikiLeaks to raise public awareness about the effects of war on civilians, and has said she was confronting gender dysphoria at the time of the leaks while deployed in Iraq.

She attempted suicide twice last year, according to her lawyers, citing her treatment at Leavenworth.

"We are all better off knowing that Chelsea Manning will walk out of prison a free woman, dedicated to making the world a better place and fighting for justice for so many," Stangio said in a statement.

"Thank you to everyone who campaigned for Chelsea Manning's clemency," WikiLeaks founder Julian Assange said in a message posted to Twitter. "Your courage & determination made the impossible possible."

The U.S. Army declined to comment on the announcement when asked by The Associated Press.

"We must remember that clemency is an extraordinary remedy, granted only after the president has concluded that a particular individual has demonstrated a readiness to make use of his or her second chance," Eggleston added. "Only Congress can achieve the broader reforms needed to ensure over the long run that our criminal justice system operates more fairly and effectively in the service of public safety.”

"Chelsea Manning’s treachery put American lives at risk and exposed some of our nation’s most sensitive secrets," he said in a statement. "President Obama now leaves in place a dangerous precedent that those who compromise our national security won’t be held accountable for their crimes.”

The decision is expected to have a ripple effect on WikiLeaks founder Julian Assange and the organization. Two former intelligence officers have told Fox News that a CIA WikiLeaks taskforce was set up to assess damage from the Manning leaks.

"I think it would strengthen his (Assange’s) position considerably," Tom Dupree, former Deputy Attorney General, told Fox News in a previous interview. "If the United States government said we are going to pardon Manning for those offenses,  I think it makes it that much tougher to then say we’re going to drop the hammer on the person that published that information."

Senate Majority Whip John Cornyn, R-Texas, told Fox News that while pardons are a Constitutional tool in the president's repertoire, Obama is "undermining our ability on criminal justice reform by granting clemency at an alarming rate."

Cartwright, the former vice chairman of the Joint Chiefs of Staff, received a pardon, the White House said. He pleaded guilty in October to making false statements during an investigation into a leak of classified information about a covert cyberattack on Iran's nuclear facilities. Prosecutors said Cartwright falsely told investigators that he did not provide information contained in a news article and in a book by New York Times journalist David Sanger, and said he also misled prosecutors about classified information shared with another journalist, Daniel Klaidman.

The Justice Department sought a sentence of two years, saying employees of the U.S. government are entrusted each day with sensitive classified information.

"They must understand that disclosing such information to persons not authorized to receive it has severe consequences," prosecutors wrote in a sentencing memorandum filed this month.

Commutations reduce sentences being served but don't erase convictions. Pardons generally restore civil rights, such as voting, often after a sentence has been served.

Jessica Jackson Sloan, National Director of #cut50, which looks to reduce the incarcerated population by 50 percent over the next 10 years, called Tuesday's announcement another action to address "our broken criminal justice system."

"For far too long, efforts to fight crime have missed their mark, breaking up families and harming the human potential in our most vulnerable communities," Sloan said in a statement. "Thanks to President Obama’s clemency initiative, more than one thousand people who were given overly harsh sentences during the War on Drugs now have a second chance at freedom."

One other notable name to receive a pardon was 79-year-old former baseball star Willie McCovey, who received two years' probation and was fined $5,000 in 1996 on charges related to tax evasion.