Barack Obama: There's no one I'd trust to heal this country more than Joe Biden

With the help of his onetime boss, presumptive Democratic presidential nominee Joe Biden raised a record $11 million on Tuesday at a fundraiser co-hosted by former President Obama.

The haul at the grassroots fundraiser -- $7.6 million from 175,000 grassroots supporters and the rest from top-dollar donors -- breaks the former vice president's previous record, set earlier this month at a fundraiser co-hosted by Sen. Elizabeth Warren of Massachusetts, a one-time rival during the Democratic presidential primaries.

REUNITED: OBAMA TEAMS UP WITH BIDEN FOR THE FIRST TIME IN THE 2020 PRESIDENTIAL CAMPAIGN

The Trump campaign noted that it hauled in $10 million around Saturday's rally in Tulsa, Okla., the president's first since the coronavirus pandemic swept across the country in March. And it brought in $14 million a week earlier - around Trump's 74th birthday.

The former president told the roughly 120,000 people who dialed into the fundraiser that “there's nobody that I trust more to be able to heal this country and get it back on track, than my dear friend Joe Biden.”

But spotlighting the stakes in November’s presidential election, he emphasized that “this is serious business” and stressed to supporters that “whatever you’ve done so far is not enough. And I hold myself and Michelle and my kids to the same standard."

Painting a grim picture of a country facing the worst pandemic in a century and racial unrest, Obama argued that Biden -- if elected -- will inherit a tougher situation that when he entered the White House.

“Things were tough in 2008, 2009. We were going through the worst recessions since the great depression, a massive financial crisis we were still in the midst of two wars. We’re overcoming a decade in which the possibilities of common work and common purpose had been diminished and downgraded and government had been starved of resources that were needed to make us more equal and just and compassionate society,” Obama said. “And yet I have to say the foundation stones the institutions we had in place were still more or less intact.” 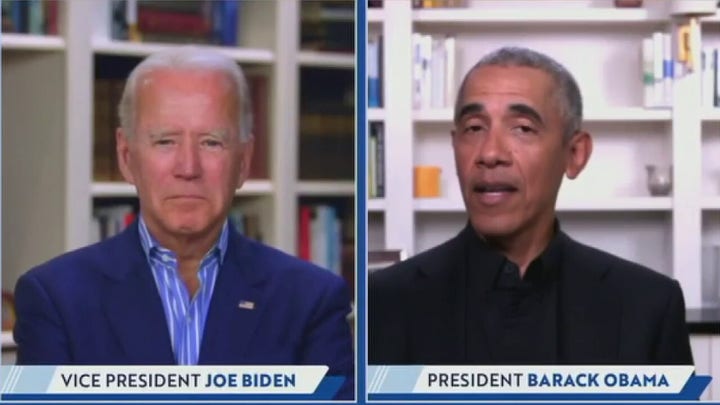 And pointing toward former President George W. Bush, Obama highlighted that “my predecessor who I disagreed with on a whole host of issues still had a basic regard for the rule of law and the importance of our institutions…There were shared ideals of human rights and rule of law.”

Obama argued that  Biden would take over the White House from a president who is undermining “the very foundations” of the country.

Taking aim at Trump without naming the president, Obama charged that his successor in the White House “suggests facts don’t matter, science doesn’t matter... suggests that a deadly disease is fake news. That sees the Justice Department as simply an extension and arm of the personal concerns of the president. That actively promotes division and considers some people in this country more real as Americans than others.”

But Obama also struck a positive note, saying that what makes him optimistic about the future “is the fact that there is a great awakening going on around the country, particularly among younger people, who are saying not only are they fed up with the shambolic, disorganized, mean-spirited approach to governance that we’ve seen over the last couple of years but, more than that, are eager to take on some of the core challenges that have been facing this country for centuries.”

After the former president and former vice president took questions from the audience, Obama jumped as Biden was wrapping up the event to say “Love you, Joe.”

"Love you too, pal," Biden responded.

For Obama, the virtual event marked a return to the presidential campaign trail. It was the former president’s first event for Biden since endorsing his right-hand man in the White House for 8 years. Obama stayed neutral in the wide-open Democratic primary race, which at one point sported a roster of more than two dozen candidates. He gave his support to Biden in April after the former vice president’s final rival, Sen. Bernie Sanders of Vermont, suspended his campaign and endorsed Biden.

The joint fundraiser was expected to kick off a busy schedule for the former president busy scheduled heading into the fall on behalf of Biden and down-ballot Democrats.

A Democratic strategist familiar with Obama’s thinking told Fox News that "Tuesday’s grassroots fundraiser is a smart first campaign event for President Obama – helps direct resources to the campaign while reinforcing his deep-rooted messages core to his entire public life: the importance of the grassroots, building a movement, getting involved.”

The strategist -- who asked to remain anonymous to speak more freely -- noted that in 2018 Obama “was the top requested surrogate in the country. His approval rating is 20 points higher than President Trump. And in 2020 there’s nobody better positioned to make the case for Joe Biden."

While political strategists and pundits agree that an active Obama can only help Biden as well as down-ballot candidates this autumn, in the end, there’s only so much a surrogate can do. Then-President Obama aggressively stumped for Hillary Clinton in the 2016 general election, but the Democratic nominee came up short.

“The lure of President Barack Obama still can’t give the Biden campaign the level of unprecedented enthusiasm we see nightly from millions of President Trump’s supporters," Trump campaign deputy press secretary Ken Farnaso said ahead of the event.

"President Trump built a historically strong economy once and he is doing it again. In contrast, the Obama/Biden dismal track record of record-slow economic recovery and high taxes devastated our economy and come November the American people will not put our country in the hands of that same failed leadership.”

Obama’s appearance at Tuesday’s fundraiser was about much more than setting a campaign cash record.

It comes as Biden’s continuing to reach out to the progressive wing of the Democratic Party, as well as voters who backed Obama in 2008 and 2012 but voted for President Trump in 2016.