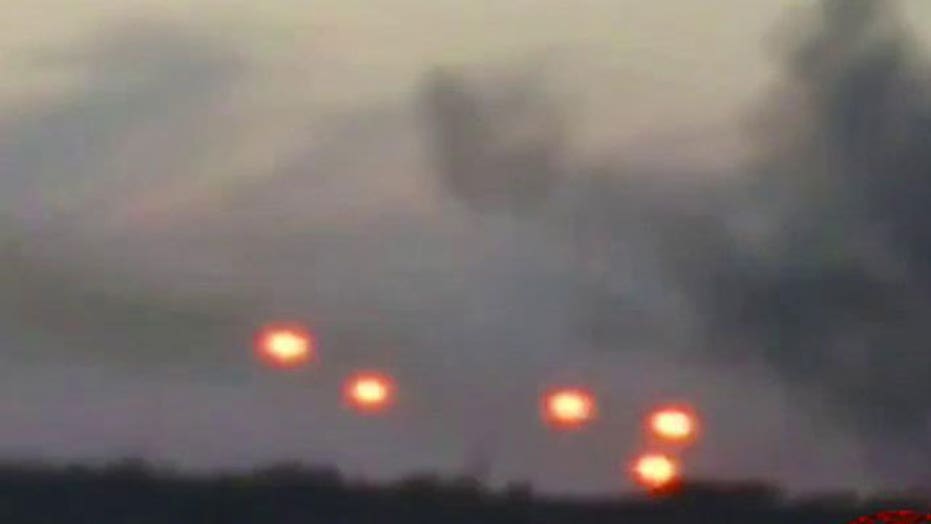 US warns Russia is escalating deadly conflict in Ukraine

How should the White House respond?

Obama administration officials said Thursday that Russia is firing artillery from its own territory into Ukraine to hit Ukrainian military sites, pointing to escalating Russian involvement in the deadly conflict.

"This clearly is a military escalation," Pentagon spokesman Col. Steve Warren said, adding there is no question that Russian military -- as opposed to Russia-backed separatists -- are firing the shots.

"We have new evidence that the Russians intend to deliver heavier and more powerful multiple rocket launchers to separatist forces in Ukraine and have evidence that Russia is firing artillery from within Russian to attack Ukrainian military positions," Harf told reporters.

She said the evidence derived from "human intelligence information" but declined to elaborate, saying it would compromise sources and methods of intelligence collection.

The Pentagon, though, confirmed her account, and said Russia has been firing artillery for several days now.

The allegations come amid an increasingly bitter war of words between Washington and Moscow over the crisis in Ukraine and conflicting claims over the downing of a Malaysian passenger jet over eastern Ukraine last week.

The U.S. repeatedly has accused Russia of stoking the Ukraine rebellion and has said it believes separatists shot down the Malaysian plane, killing nearly 300 people, with a Russian provided surface-to-air missile.

Harf said Wednesday the ultimate responsibility for the downing of the plane rests with Russian President Vladimir Putin and the Russian government.

Former CIA director Gen. Michael Hayden told Megyn Kelly Thursday night on "The Kelly File" that in light of recent developments, "it's not just about Ukraine now, it's about what Europe is going to look like for the next era."

Meanwhile, additional military aircraft carrying remains of victims from the Malaysian plane disaster arrived in the Netherlands on Thursday, while Australian and Dutch diplomats joined to promote a plan for a U.N. team to secure the crash site which has been controlled by pro-Russian rebels.

On Monday, the U.N. Security Council unanimously approved a resolution proposed by Australia demanding that rebels cooperate with an independent investigation and allow all remaining bodies to be recovered.