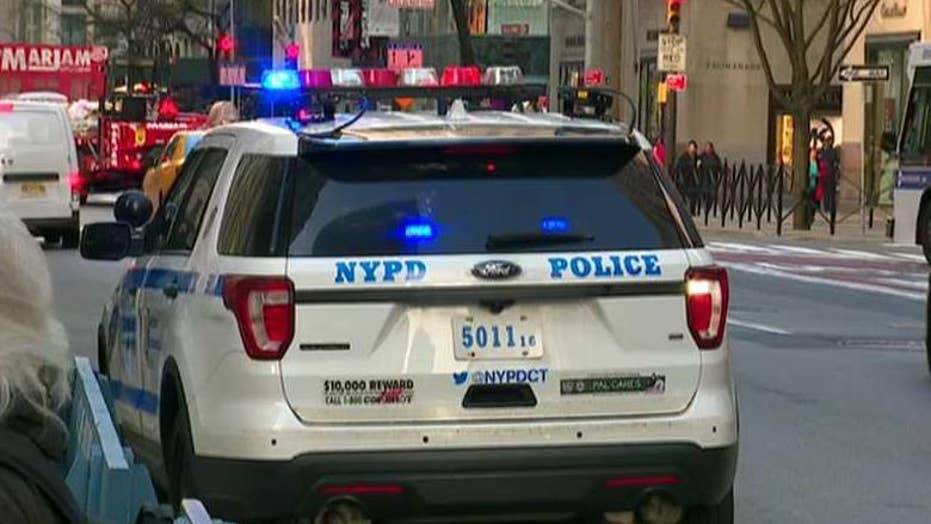 Have we hindered officers' ability to do their jobs? Reaction from former Tucson, Ariz., Officer Brandon Tatum.

The New York Police Department union on Wednesday delivered a unanimous vote of no confidence in Mayor Bill de Blasio and NYPD Commissioner James O’Neill – calling for their removal and resignation, respectively, following the firing of the officer involved in the arrest that led to Eric Garner's death five years ago.

The New York Police Benevolent Association, which represents nearly 25,000 of New York’s Finest, voted in its delegate assembly to disapprove of both men just weeks after the firing of Officer Daniel Pantaleo. The firing was announced by O’Neill; since then, officers have accused de Blasio of failing to back the police and interfering in the process.

The motions call for O’Neill to resign, and for New York Gov. Andrew Cuomo to remove de Blasio from office. PBA President Patrick J. Lynch said the votes represented “an unequivocal indictment of our failed leaders in City Hall and 1 Police Plaza.”

“For years, Mayor de Blasio has demonized police officers and undermined our efforts to protect our city. For years, Commissioner O’Neill has cravenly acquiesced to the mayor and his anticop allies,” he said in a statement. “The unjust termination of P.O. Daniel Pantaleo was merely the final straw: Both men have displayed an appalling pattern of malfeasance and nonfeasance that disqualifies them from continuing to serve in their current offices.”

Lynch added: “Neither can hope to regain the trust or confidence of New York City police officers. They must resign or be fired.”

De Blasio spokesperson Freddi Goldstein called the vote "another attempt by the PBA to divide our city and we won't stand for it."

"Under this mayor and Police Commissioner, our officers and the communities they serve are closer than ever and the city is the safest it’s ever been," she said. "That isn’t changing.”

“The dedicated women and men of the NYPD are out there each and every day, serving the public proudly and keeping the city safe," O'Neill's office said in a statement. "The Department stands with its officers, and will always support them and the brave work that they do."

"As the Police Commissioner has said before, his heart and soul are with the NYPD, and he is honored to lead this Department as it continues to drive crime to historically low levels,” the statement said.

Pantaleo was fired over his role in the 2014 arrest of Garner, who was selling untaxed cigarettes on Staten Island. After he resisted arrest, Pantaleo got behind him and took him down. Prosecutors later argued that he used a banned chokehold, but Pantaleo argued he used an approved “seat belt” technique.

Garner could be heard saying, “I can’t breathe,” a quote heard in video of the fatal encounter that subsequently went viral. The police union has argued that Pantaleo did nothing wrong, and that Garner’s death was attributable to poor health and obesity.

Officers were angered at the perceived politicization of the case – with national Democrats demanding Pantaleo's termination during last month’s presidential primary debate in Detroit. De Blasio angered cops by saying that the Garner family would have “justice.”

O’Neill announced the decision, which he called “extremely difficult,” and predicted there would be anger from officers on the ground: “If I was still a cop, I'd probably be mad at me,” he said.

That anger has been coming out of the police union almost daily since that decision. Lynch warned that “the job is dead” and advised officers to proceed “with the utmost caution” amid what he sees as an anticop atmosphere in the Big Apple.

The New York Post reported that arrests have dropped since the firing of Pantaleo when compared to 2018. Between Aug. 17, when Pantaleo was fired, and Aug. 25, arrests dropped by 27 percent from the same period a year earlier, the Post said.

The NYPD said in a statement to the Post that officers were practicing “precision policing” and “focusing on the offenders who commit crimes, not the accumulation of raw numbers.”