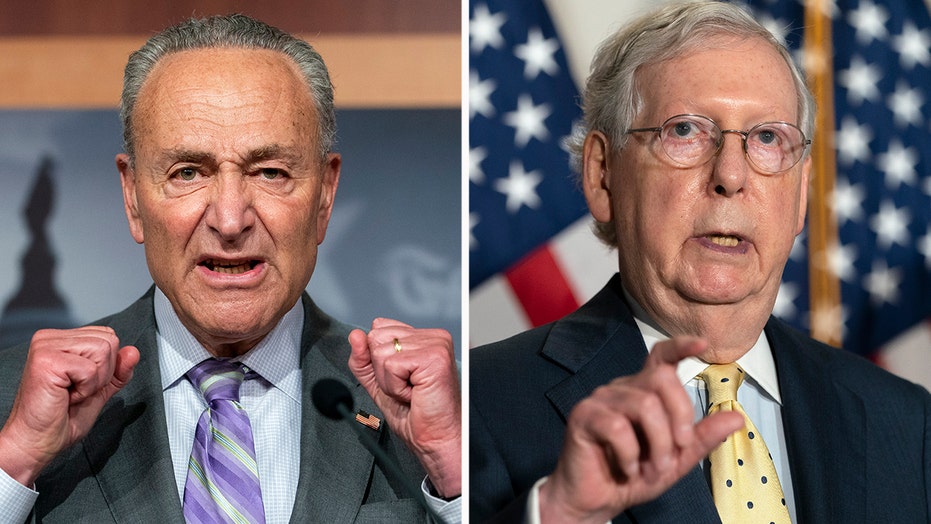 Senate to vote on $300B coronavirus relief bill

The Democrats are planning to block the $300 billion relief bill and says it’s ‘not enough to meet the Americans’ needs’; Chad Pergram reports.

There is an old adage they often teach first year law students.

It kind of works that way on Capitol Hill with legislation.

When you don’t have the votes, especially on your side of the aisle, pound on the table.

And, pound the other side.

There was a lot of pounding on Capitol Hill the past few days as Senate Republicans tried to advance some form of coronavirus relief.

But there’s still no movement on a fifth round of coronavirus relief.

That was a headline Republicans hoped would catch the attention of assignment editors and political reporters everywhere. And, it was further than McConnell has gone all summer long about moving the next phrase of coronavirus aid.

McConnell often tempered expectations about the next coronavirus bill over the summer. The Majority Leader barnstormed the Blue Grass State for months, from Ashland to Owensboro, campaigning for a seventh Senate term. McConnell prefaced the possibility of another coronavirus relief package with the word “if.” He bragged he’d personally draft the next measure in his office and not let House Speaker Nancy Pelosi, D-Calif., anywhere near it.

The Kentucky Republican also managed expectations. McConnell said on more than one occasion that the Senate Republican Conference featured 20 GOPers who were reluctant to vote for additional aid at all.

That may have lowered expectations.

McConnell and other Senate Republicans rolled out a series of disparate coronavirus proposals several weeks ago. The plans touched on everything from job assistance to education aid. The problem was that McConnell struggled to coax a majority of Senate Republicans to coalesce around any plan to command 51 yeas.

The bill needed 60 votes to overcome a filibuster. But 52 Republicans voted to crack the filibuster Thursday. Sen. Rand Paul, R-Ky., was the only defection.

Questions echoed around the Capitol all week as to if McConnell had 51 GOP yeas. McConnell was coy when pressed on this issue by yours truly Wednesday.

“The vote will be cast tomorrow,” said McConnell.

He may not have had them Wednesday. But, he at least had 52 votes on Thursday.

And, McConnell truly authored this particular bill in his office.

There is no Congressional Budget Office (CBO) “score” establishing the official price tag of this bill. Various analyses suggested the legislation may cost as much as $500 or $600 billion. The official line from McConnell’s shop was $300 billion. But with no CBO estimate, no one really knows.

That’s so the bill could appeal to various GOP Senate constituencies.

Some Senate Republicans may be ok with a more “expensive” bill. But a scaled back, “skinny” bill would certainly appeal to even the most skeptical of Republican senators. Hence, the $300 billion figure.

Such a skeletal bill wouldn’t resonate with any Democrats. But this bill wasn’t designed to pass. It was designed to “pound on the table.”

McConnell rekindled his coronavirus ideas again as the Senate returned to session a few days ago. McConnell pounded on the table.

Translated: We need Democratic votes to pass another coronavirus bill. And since they will reject our bill, we’ll blame them.

With 53 Senate Republicans, McConnell certainly needed assistance from Democrats to cut off a filibuster. But this was an effort to show voters that Senate Republicans weren’t completely asleep at the switch in the middle of a pandemic.

A “skinny” bill represented an effort to contrast the GOP’s blueprint with “tax and spend” Democrats ahead of the election – especially since the House approved a staggering $3 trillion relief bill in May. The springtime legislation was the most-expensive bill in Congressional history.

McConnell faced internal pressure internally to do something - even if it was just table pounding - to boost Republican senators facing challenging re-election bids. McConnell needed to present vulnerable GOP senators from battleground states a measure which they could support. That happened on Thursday.

The other part of this strategy was to get Democrats on the record blocking even a bald bill. You need Democrats to crack a filibuster. So McConnell dared Democrats to vote nay. None did.

But, sans a bipartisan coronavirus package, Thursday gave some Republicans the outcome they wanted. They could then weaponize Thursday’s vote against Democrats and portray them as obstructionists, failing to support the narrow legislation.

“If you wanted to draft a bill that was certain to fail, this is it,” said Schumer. “This is one of the most cynical moves I have ever seen.”

The failed procedural vote in the Senate may well stall any coronavirus relief package until after the election – if not next year.

Congress doesn’t have to pass a coronavirus bill.

But, lawmakers do need to approve a stopgap spending bill before October 1, the start of the government’s fiscal year. A government shutdown during a pandemic could be the most apocalyptic scenario of all.

There is now an effort to forge an interim spending bill, known as a Continuing Resolution, or “CR,” to sidestep a shutdown. A CR simply renews all money at existing levels and doesn’t include extraneous provisions.

Congress will leave Washington in a couple of weeks to focus on campaigns. That means that an interim spending bill is the only train leaving the station. In other words, if there was a puncher’s chance to get coronavirus aid, the obvious option is to hook relief onto the government spending bill.

I asked Pelosi if she thought the failed vote meant coronavirus assistance was done until after the election. She replied no. But Pelosi reiterated she wouldn’t Velcro additional coronavirus aid, no matter how small, onto any government funding bill. She mentioned that Treasury Secretary Steve Mnuchin, who is leading the negotiations for the administration, wouldn’t support tacking anything onto an interim spending bill, either.

That said, bills sometimes need to flat line before they are resuscitated – like with Thursday’s procedural vote. That could happen – especially if the sides feel political pressure to do something. And, perhaps more importantly, if “doing something” would boost lawmakers ahead of the election. Many rank-and-file Democrats have begged Pelosi to move some form of coronavirus aid. Such a dynamic could persuade the Speaker to change her view when the House returns to session. Or, the pressure could force Pelosi, McConnell and the Trump Administration, to return to the bargaining table.

Nothing has truly evolved on the coronavirus relief front since the House approved the $3 trillion “phase five” bill in May. And, when it comes to coronavirus assistance, there’s only one thing which could change the dynamic: the election.

Until then, expect the sides to just bang on the table.