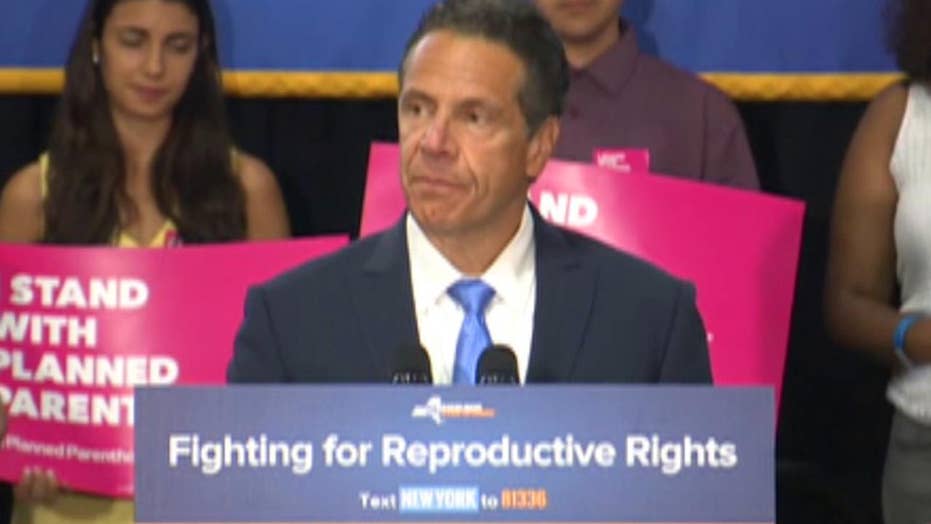 Ahead of the planned announcement of President Trump’s Supreme Court nomination, New York Gov. Andrew Cuomo signed an executive order to protect abortion and contraceptive coverage in the state.

Since Justice Anthony Kennedy announced his retirement, giving Trump the ability to select his second Supreme Court justice in his first term as president, Democrats have publicly expressed concern that the nation’s highest court, with the addition of a conservative judge, could overturn Roe v. Wade, the 1973 landmark decision that legalized abortion.

Flanked by women holding signs in support of Planned Parenthood, the nation’s largest abortion provider, Cuomo on Monday said Trump plans to roll back Roe v. Wade as part of his plan to “make America great again” and “take us back to the dark days ... before women had the constitutional legal protection to control their own bodies.”

He derided the Supreme Court as a “rubber stamp for the president.”

“Mark my words, they are moving to roll back Roe v. Wade. That is going to be the next move by this president,” Cuomo, a Democrat, said.

His order updates a Department of Financial Services regulation to expand coverage of contraceptive drugs and devices and allow women to fill up to 12 months of a prescribed contraceptive at one time, according to a news release. It ensures "that women in New York who are insured through individual, small group and large group comprehensive health insurance policies as well as Medicaid receive insurance coverage without cost-sharing for contraceptive services."

Cuomo signed a similar order in January 2017 that ensured in New York “contraceptive drugs and devices are covered by commercial health insurance policies without co-pays, coinsurance or deductibles regardless of the future of the Affordable Care Act.”

Monday's directive codified the 2017 guidance "regarding information that must be provided in formularies regarding contraceptives, including noting which contraceptives are covered without cost-sharing," the governor's office said.

Cuomo also called on the state Senate to hold a special session to pass legislation that would codify Roe v. Wade in New York before the next Supreme Court justice is confirmed. As the Albany Times Union reported, the Republican-controlled state Senate has blocked efforts to pass the Reproductive Health Act (RHA) in the past.

At the campaign-style event Monday, Cuomo said, “God told me I was a feminist when he gave me three daughters.” He blasted the “extreme conservative philosophy in Washington that is trying to take over the country.”

“The federal government … has shown total disrespect to women. The disrespect they show is personal, it’s professional and it is governmental,” Cuomo said, adding the government has “done nothing” with the Me Too movement.

Cynthia Nixon, who is challenging Cuomo in the Democratic gubernatorial primary in September, said Cuomo’s efforts are too late.

“You shouldn’t only govern and fight like a Democrat right before the Democrat primary; you should do it after the election too,” Nixon, an actress, said earlier Monday, according to the New York Daily News.

With the announcement planned for Monday night, Trump has already decided who will be his Supreme Court nominee, a source has told Fox News. He’s thought to be deciding between four judges: Amy Coney Barrett, Thomas Hardiman, Brett Kavanaugh and Raymond Kethledge.

In 2016, Trump pledged he would be “putting pro-life justices on the court.”

Republican Sens. Susan Collins of Main and Lisa Murkowski of Alaska have said they support abortion rights and will be looking for assurances from the nominee that Roe v. Wade will not be overturned.

Both women are being targeted by a liberal group over their vote. However, in 2017 they both voted to confirm Gorsuch, who was confirmed 54-45.