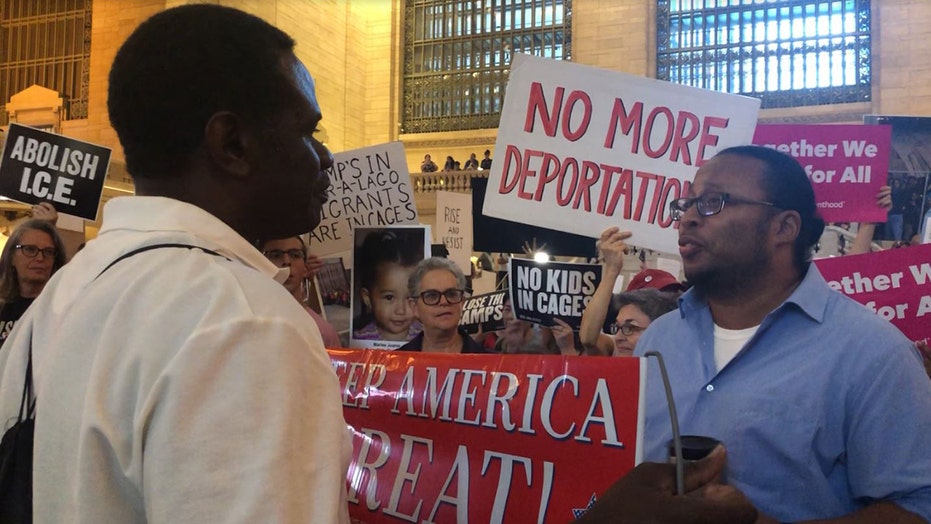 Meanwhile, counter-protestors slammed Democrats, citing what they viewed as the party's inaction on the nation's border crisis and demanding that personnel from Immigration and Customs Enforcement (ICE) be respected.

The hour-long event was organized by Rise and Resist NYC, the local arm of a nonprofit formed in response to President Trump’s election in 2016. It was described on its Facebook page as a silent protest to “object to Border Patrol and ICE terrorizing immigrants, refugees, and asylum seekers.”

Demonstrators from both sides of the nation's debate on the U.S.-Mexico border crisis face off Thursday at Grand Central Terminal in New York City. (Danielle Wallace/Fox News)

Alexis Danzig, a member of Rise and Resist, told Fox News she helped organize Thursday’s protest to take a stand against “the Trump administration’s disastrous policies at our border.” When asked who she would support in the upcoming 2020 presidential election, Danzig told Fox News she’d vote for “anybody but Trump.”

She also opposed the “locking up people who have come legally to apply for asylum and putting children and families separately into concentration camps with no means to reconnect them.” (Rep. Alexandria Ocasio-Cortez, D-N.Y., received backlash in June for comparing U.S.-run detention camps along the U.S.-Mexico border to Nazi-era concentration camps.)

A smaller group of counter-protesters, some carrying "Trump 2020" banners and "Keep America Great" posters, stood nearby.

A Trump supporter who identified herself only as Jennifer said ICE personnel and law enforcement in New York City were not getting the respect they deserve. She also blamed House Democrats for withholding funds intended to address border issues. (On July 1, President Trump actually signed into law a $4.6 billion spending bill for the border after the plan won approval from both the GOP-led Senate and Democratic-led House.)

"The Democrats had the White House and Congress [under former President Obama] and they did absolutely nothing,” to address the border crisis, she said.

She said ICE agents are “very hard-working people. A lot of them are Hispanic themselves. They want to keep our country safe. They want sex slavery to end. They want the drug trade to be slowed down. ... They deserve respect just like our police force deserve respect that they haven’t been getting in this city.”

Grand Central Terminal is visited by about 750,000 people daily and is a popular venue for protests. According to the event’s Facebook page, nearly 300 people participated in Thursday's demonstration. Police and other law enforcement officers were on hand. No arrests were reported.