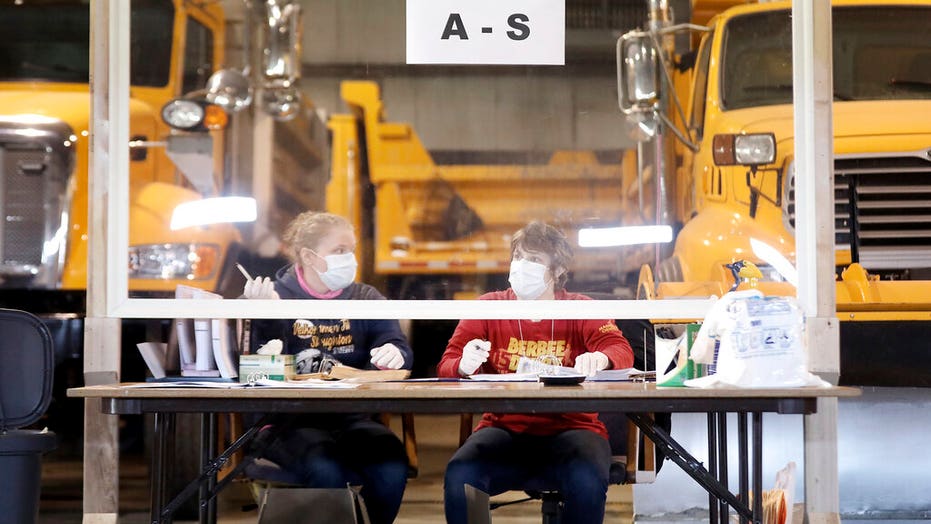 New York has canceled its Democratic presidential primary for the first time ever due to the coronavirus pandemic -- igniting a backlash from supporters of Vermont Sen. Bernie Sanders, whose campaign had asked that his name be allowed to stay on the ballot.

The move by Democrats on the New York State Board of Elections -- nixing the election scheduled for June 23 -- followed Sanders’ announcement earlier this month that he would suspend his presidential campaign, rendering former Vice President Joe Biden the presumptive Democratic nominee.

With this decision, New York became the first state to cancel its primary altogether, though 16 states have postponed their primaries amid the pandemic and many have taken steps to encourage voting by mail.

The announcement drew fire from Sanders supporters and the campaign itself. "Today's decision by the State of New York Board of Elections is an outrage, a blow to American democracy, and must be overturned by the DNC," Sanders campaign adviser Jeff Weaver said in a statement Monday. "Just last week Vice President Biden warned the American people that President Trump could use the current crisis as an excuse to postpone the November election. Well, he now has a precedent thanks to New York state."

On Sunday, Sanders’ campaign asked the New York State Board of Elections to let his name remain on the Democratic primary ballot, saying doing so would impede “efforts to unify the Democratic Party in advance of November elections.”

"It is completely wrong for the BOE to cancel New York’s Presidential Primary," tweeted New York Rep. Alexandria Ocasio-Cortez, who had endorsed Sanders in the race. "This decision is not informed by public health: the state is still holding elections for every other seat that day, & so far the only way your ballot will 100% be counted in NY is to vote in person!"

The pro-Sanders group, Our Revolution, claimed officials are "suppressing" the votes of Sanders supporters.

“Suppressing the Sanders vote in New York will again lead to attacks on the Party across the nation and harm the volunteer effort that our group and others are building,” said Paco Fabian, the group’s communications and campaigns director. “What is the possible motivation here besides trying to return control of 274 delegates to the bureaucratic party. Apparently, The NY State Board of Elections thinks democracy is a beauty contest.”

The Elections Board effectively canceled the primary by removing Sanders' name from the ballot, thanks to an appropriations bill signed by Gov. Andrew Cuomo on April 13 which gave the State Board of Elections the authority to remove a candidate from the ballot if they have suspended their campaign.

"Yes. The two Democratic Commissioners removed all candidates from the ballot except Joe Biden. By operation of law, NY does not hold uncontested primaries," the N.Y. State Board of Elections confirmed to Fox News. "So their action de facto eliminates the Democratic presidential primary and Joe Biden is effectively the winner of the N.Y. primary."

The canceling of the primary – which was originally scheduled to be held Tuesday before being postponed to June 23 -- complicates the delegate selection process as there were 274 convention delegates at stake in New York's primary. While it's clear Biden’s the presumptive nominee, there are other things -- like party platform and rules --that delegates vote on at conventions.

"Any substantive change to a state's first determining step in allocating delegates like this one will need to be reviewed by the DNC's Rules and By-Laws Committee," David Bergstein, a Democratic National Committee spokesman, told Fox News. "Once the state party submits an updated selection plan on how they plan on allocating delegates, the committee will look at that plan and make a determination."

“It just makes so much sense given the extraordinary nature of the challenge,” Jacobs said last week. No other contest is on the ballot in about 20 of the state’s 62 counties on June 23, meaning voters in those counties will have no need to go to the polls on that day.

Sanders' campaign on Sunday asked the commissioners not to cancel the primary. Sanders endorsed Biden on April 13, but when he suspended his campaign he said he hoped to keep amassing delegates in an effort to influence the Democratic party platform.

Sanders never terminated his campaign with the Federal Election Commission, and Biden's campaign has publicly supported Sanders' decision to remain on the ballot so that he'll be represented at the party's national convention in August.

Michael Seymour, an attorney representing the Sanders campaign, argued in a letter to the board obtained by The Huffington Post that the Vermont senator suspended his campaign under the assumption that he would remain on the ballot and the new rule should not be retroactively enforced.