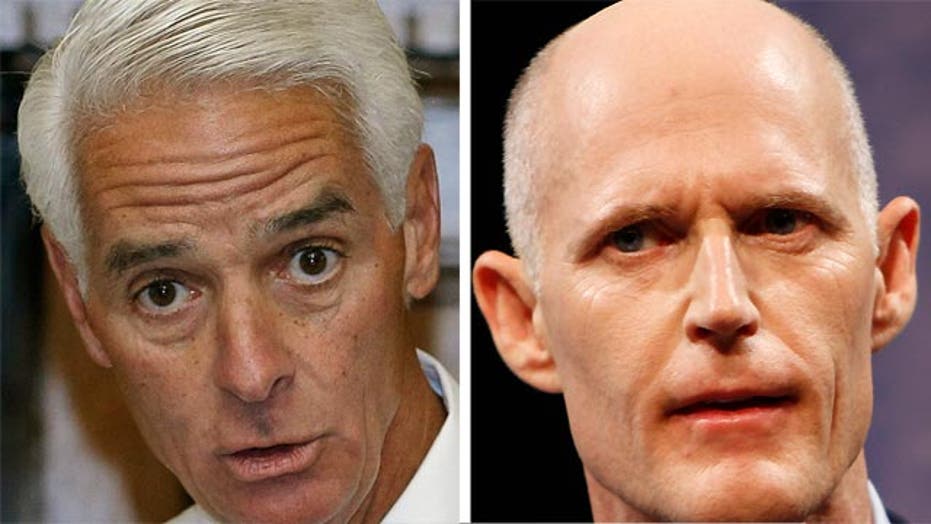 Can Crist make comeback against Scott for Florida governor?

Charlie Crist, the former Florida Republican governor who later became an independent before switching again to become a Democrat, is setting out on a comeback bid in what promises to be one of the nastiest – and costliest -- gubernatorial races this year.

Crist easily beat opponent Nan Rich, a former state senator, in the Florida Democratic primary on Tuesday with 74 percent of the vote. Republican Gov. Rick Scott, elected in 2010, also won his respective primary with 87 percent of the vote over rival Elizabeth Cuevas-Neunder.

But both candidates are in for a grueling general election battle, with polls showing the match-up a dead heat. A RealClearPolitics average of surveys shows Scott barely up by one point.

The race could be the most expensive in state history, and millions in political ads already have been spent. Scott's campaign and his allies have spent over $20 million in TV ads that have mostly targeted Crist’s policy stance changes.

On the Democratic side, liberal billionaire and climate activist Tom Steyer has released five ads in Florida TV markets through his NextGen group that have harshly criticized Scott's first term as governor. Democrats are expecting Steyer's group to spend upwards of $10 million in the race.

Crist also took a shot at the sitting governor in his primary victory speech in Fort Lauderdale Tuesday night.

"I am honored to be the nominee for the Florida Democratic party for governor, " Crist said. “Let me tell you why that’s important: Because in 70 days we want to make Florida Scott free.”

Aside from the nastiness, the race has become a microcosm for national issues including President Obama's Affordable Care Act. Crist's full-throated support for the Affordable Care Act is the point of attack at virtually every campaign stop for Scott.

In an interview with Fox News, Scott said he believed "ObamaCare," and Crist's enthusiastic support of the health care law, would be a significant issue for Florida voters.

"Barack Obama is all in for Charlie Crist because Charlie Crist is all in for ObamaCare," Scott said, before a visit to his campaign offices in his home town of Naples. "He's probably the only politician I know of in the country who has said ObamaCare is great. I've said 'Charlie, it's not great.'"

Ordinarily in tight Florida races, politicians focus on swing voters in the center of the state, along the I-4 corridor between Tampa and Orlando.

This time, Crist is shifting the focus South, going after Obama supporters who might not typically vote in an off-year election.

While Scott has struggled through low approval ratings and battles with the legislature, Crist carries a controversial political past.

A one-time self-described Reagan Republican, Crist has struggled to find his political identity. He ran for Senate in 2010, but chose to do so as an independent amid a strong Republican challenge from Marco Rubio. Rubio ended up blasting away Crist in the general election.

The former governor later switched to become a Democrat and endorsed Obama in 2012.

He predicted a costly race, with upwards of $200 million being spent before November.

“Remember this is a ‘purplish’ state and what happens here in 2014 has ramifications for 2016,” he said.