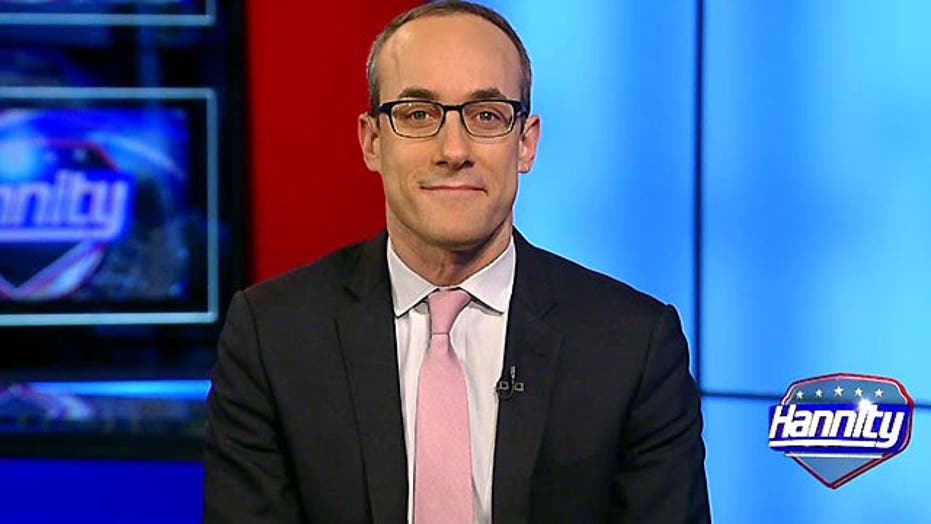 How Iran deal will impact relationship with Israel

Dan Senor weighs in on 'Hannity'

Israeli Prime Minister Benjamin Netanyahu blasted the framework nuclear agreement with Iran Thursday in a telephone conversation with President Obama, putting him on a collision course with the U.S. and his closest allies.

Netanyahu said he voiced his "strong opposition" to the outline -- which is being welcomed around much of the globe -- and said a final deal based on this framework would "threaten the survival of Israel."

He added that the deal would legitimize Iran's nuclear program and increase Iranian "aggression and terror."

Netanyahu has been a vocal critic of the world's negotiations with Iran, and Israeli officials gave Thursday's framework agreement, announced in Lausanne, Switzerland, a cool reception.

But Netanyahu could find a tough time trying to rally opposition to it as it is finalized in the coming months. His best bet for foiling the deal could lie with the U.S. Congress, where Israel enjoys bipartisan support. Lawmakers have been threatening to try to delay the agreement or even push for new sanctions against Iran.

Netanyahu believes Iran is trying to develop a nuclear bomb — a concern that has been shared by much of the world. He considers a nuclear-armed Iran a threat to Israel's very existence, given Iranian leaders' calls for the destruction of the Jewish state, Iran's support for hostile militant groups across the region and its development of long-range ballistic missiles.

"Any deal must significantly roll back Iran's nuclear capabilities and stop its terrorism and aggression," Netanyahu said on Twitter just ahead of the announcement in Lausanne.

Netanyahu's comments echoed those of other Israeli officials, who reportedly see the agreed-upon framework as a capitulation by the U.S. and the West that will lead to the creation of a military nuclear program by Iran.

The Algemeiner Journal reported that Israeli officials told the country's Channel 2 News that the deal outline legitimized Iran's nuclear program while not doing enough to limit it. Other concerns included the guaranteed lifting of sanctions levied against Iran by the West and the lack of any check on what the officials called Iran's "aggression in the region, its terrorism worldwide, and its threats to destroy Israel, something they repeatedly emphasized even in the last few days."

Yuval Steinitz, Netanyahu's Cabinet minister who monitors the Iranian nuclear program, said earlier Thursday that Israel would continue to fight against it in the coming months.

"We will continue to fight on the intelligence front, the public front to explain," he told Channel 2 TV. "We will examine very well how to cancel it, or at least to close some of the open breaches in this interim agreement."

Steinitz added that "the smiles in Lausanne" were "detached from the wretched reality in which Iran refuses to make any concession on the nuclear issue and continues to threaten Israel and all other countries in the Middle East."

Yoel Guzansky, a former Iran analyst in the Israeli prime minister's office and a research fellow at the INSS think tank in Tel Aviv, said Thursday's announcement was a game-changer.

The deal starts a process "where Iran will stop being a pariah state," he said. "Israel will need to see how to inspect Iran on its own, and not rely on the international community."

A key factor, he said, would be how other Arab countries that share Israel's concerns about Iran will react. "Israel will have to cooperate and talk to them about the mutual fear about Iran," he said.

Netanyahu has warned of Iran's nuclear intentions for years, and has said that preventing Iran from developing a bomb is the mission of his lifetime.

In recent weeks, he stepped up his rhetoric. Last month, Netanyahu harshly criticized the emerging agreement in a speech to the U.S. Congress, enraging the White House because the visit was arranged behind its back with Republican lawmakers.

Netanyahu has warned the deal would leave much of Iran's nuclear infrastructure intact, and that the system of inspections and other safeguards is not enough to prevent Tehran from developing a nuclear weapons capability.

But Netanyahu's speech in Congress and furious Israeli lobbying to other participants in the Iran talks appeared to have made little difference.

Britain, Germany, France and Italy — all key European allies and all directly or indirectly involved in the negotiations in Switzerland— welcomed the deal.

"We are closer than ever to an agreement that makes it impossible for Iran to possess nuclear weapons," German Chancellor Angela Merkel said. "That is a great credit to all negotiating partners."

French President Francois Hollande saluted the work of the foreign ministers, but cautioned that sanctions remained on the horizon if the final agreement set for June 30 was not respected.

Russia, another participant in the talks, said the deal could have a "positive influence" on the region. U.N. Secretary-General Ban Ki-moon said the framework "paves the way" for a historic agreement that could "contribute to peace and stability in the region."

In Washington, Obama, who has had a rocky relationship with Netanyahu over Iran and other matters, tried to soothe Israeli concerns.

Acknowledging his personal differences with the Israeli leader, Obama said that "if in fact" Netanyahu wants to prevent Iran from developing a nuclear weapon, "this is the best option."

The president said he had spoken with the Saudi king, and announced that he was inviting the leaders of six Gulf nations, including Saudi Arabia, to Washington this spring.

Netanyahu has said moderate Arab states see "eye to eye" with him on Iran, sharing his concerns not only about the nuclear program but also Iran's support for hostile groups that have destabilized the region.

While Netanyahu has threatened in the past to attack Iranian nuclear facilities, that option seems to be a long shot at this stage.

Reaction from Republicans who control Congress ranged from caution to dire warnings that the pact would be a mere prelude to Tehran obtaining nuclear weapons.

House Speaker John Boehner, a Republican from Ohio, was among many insisting that Congress be allowed to vote on details of any agreement and expressing distrust of Iran.

"It would be naïve to suggest the Iranian regime will not continue to use its nuclear program, and any economic relief, to further destabilize the region," said Boehner, who visited Israel and met with Netanyahu during a Mideast tour this week.

Senate Foreign Relations Committee Chairman Bob Corker, a Republican senator from Tennessee, said that as planned, his panel will vote this month on bipartisan legislation requiring congressional review of any final nuclear deal reached by June 30. "The administration first should seek the input of the American people," he said.

Freshman Sen. Tom Cotton, a Republican from Arkansas whose March letter diminishing a potential pact with Iran drew Democratic condemnation, said he will work in Congress "to protect America from this very dangerous proposal."

Senate Minority Leader Harry Reid said he was "cautiously optimistic" about the framework. "Now is the time for thoughtful consideration, not rash action that could undermine the prospects for success," the Nevada Democrat said.

In the Iranian capital of Tehran, hundreds of drivers began honking and flashing their headlights in celebration after the deal was announced. Many motorists, returning home from the Nowruz holiday, the Persian New Year, got out of their cars and began dancing and singing in celebration,

Earlier, President Hassan Rouhani welcomed the deal, saying on his Twitter account that "solutions on key parameters" have been reached and that the final deal will be struck by the end of June.