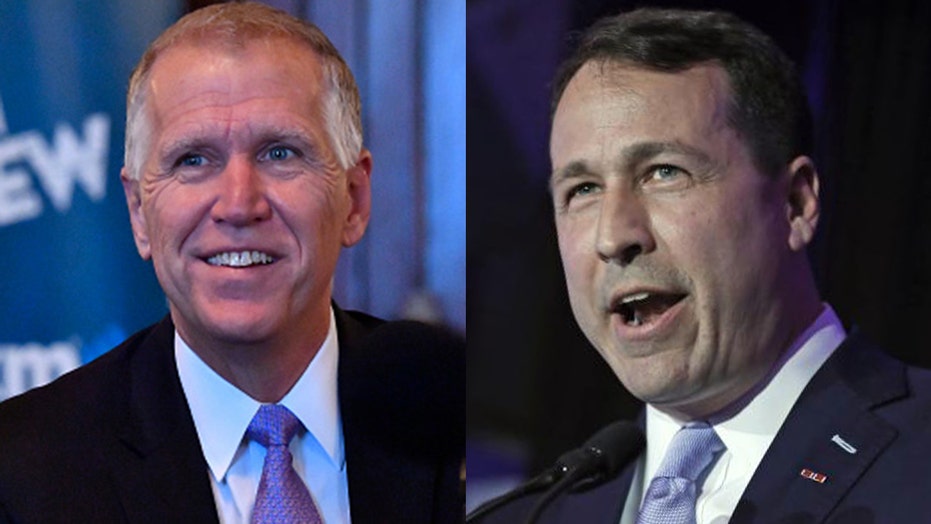 Cal Cunningham, the Democratic nominee challenging Sen. Thom Tillis for his North Carolina seat, expressed doubt about the safety of a coronavirus vaccine manufactured under the Trump administration and said during a Sunday night debate between the candidates that he would be "hesitant" to take it.

In his answer, Cunningham said he would normally have faith in the Food and Drug Administration (FDA) but slammed "financial and political" corruption in Washington, D.C., that he said might push a vaccine to be approved before it is safe, saying "we should be asking tough questions, we should not take things at face value." The debate was broadcast on WCNC Charlotte.

"Do I read you to say you would be hesitant to receive the vaccine if it were approved by the end of the year?" moderator David Crabtree asked Cunningham.

TRUMP CLAIMS CORONAVIRUS VACCINE MIGHT BE DELIVERED SOON: 'YOU COULD HAVE A VERY BIG SURPRISE COMING UP'

"Yes, I would be hesitant, but I’m going to ask a lot of questions," Cunningham responded. "I think that’s incumbent on all of us right now. In this environment, with the way we’ve seen politics intervening in Washington. I mean if we -- we can almost look no further than Sen. Tillis taking over $400,000 from Big Pharma and even blocking his own party’s efforts to reduce the cost of prescription drugs. Politics, corruption, financial and political in Washington are a major problem right now."

Tillis, R-N.C., shot back that his challenger's answer could harm efforts to fight the coronavirus by driving people to avoid taking a vaccine that could help save lives once it's developed.

"David, we just heard a candidate for the U.S. Senate look into the camera and tell 10 million North Carolinians he would be hesitant to take a vaccine. I think that that is irresponsible," Tillis said. "We are not going to release a vaccine that doesn’t have the effectiveness and safety that the gold standard that the FDA requires, but my opponent talked a while back about managing in a crisis and what he said tonight to 10 million people in North Carolina is that he would be hesitant to take the vaccine. In order for us to beat COVID, we have to be vaccinated."

Cunningham is not the first Democrat to say he would have concerns about the safety of a coronavirus vaccine developed before the end of the year or perhaps even before Election Day, as President Trump appeared to suggest last week. Sen. Kamala Harris, D-Calif., the Democratic vice-presidential nominee, said, "I will not take [Trump's] word for it," when asked by CNN if she would take a vaccine approved before Nov. 3.

'I think it's incumbent on every American, and it's one of the finest traditions of America, that we ask questions of our leaders ... especially when we have seen the corruption and the influence, political and financial, in the decision-making in Washington'

And Democratic presidential nominee Joe Biden himself said, "I would want to see what the scientists said," when asked about a vaccine, although he emphasized he would get vaccinated "tomorrow" if he had confidence one was safe, even "if it cost me the election ... We need a vaccine and we need it now."

Cunningham continued to say that he believes a vaccine is critical to the fight against the coronavirus.

"I think it's incumbent on every American, and it is one of the finest traditions of America, that we ask questions of our leaders and of our government, and especially, especially when we have seen the corruptions and the influence, political and financial, in the decision-making in Washington," he said. "We do need the vaccine. This is how we beat this virus. It's going to require a vaccine."

Tillis replied: "Cal Cunningham went on record as saying we need to trust Dr. [Anthony] Fauci. I trust Dr. Fauci. I trust the FDA. I think it's irresponsible for anybody running for any level of office to sit here and undermine that process ... What he's saying is what he thinks will get him elected because that's what Harris said, undermining the process ... This is not the time to cast doubt on the most reputable organization in the world when it comes to drug and vaccine approval."

The effort to quickly develop a coronavirus vaccine is a public-private partnership called "Operation Warp Speed," and National Institute of Allergy and Infectious Diseases Director Dr. Anthony Fauci has repeatedly said the effort to quickly develop a safe vaccine potentially by the end of the year would not sacrifice safety. But mass-producing a vaccine for hundreds of millions of Americans and then distributing it widely is another matter that will likely take months more. Fauci has warned that the coronavirus could linger as a threat to Americans until late 2021.

'What he's saying is what he thinks will get him elected because that's what Harris said, undermining the process.'

In an effort to speed up the distribution of the vaccines, however, Operation Warp Speed has involved manufacturing doses of multiple vaccines before their approval with the aim of then being able to quickly distribute them once the FDA green light comes, Vice President Mike Pence told FOX Business earlier this month.

Major players in the effort to develop a vaccine –­­ Moderna, Pfizer, and Johnson & Johnson, as well as French pharmaceutical company Sanofi –­­ released a joint statement earlier this month saying that they would not seek FDA approval of their vaccines until they are proven safe.

"We believe this pledge will help ensure public confidence in the rigorous scientific and regulatory process by which COVID-19 vaccines are evaluated and may ultimately be approved," the companies said.