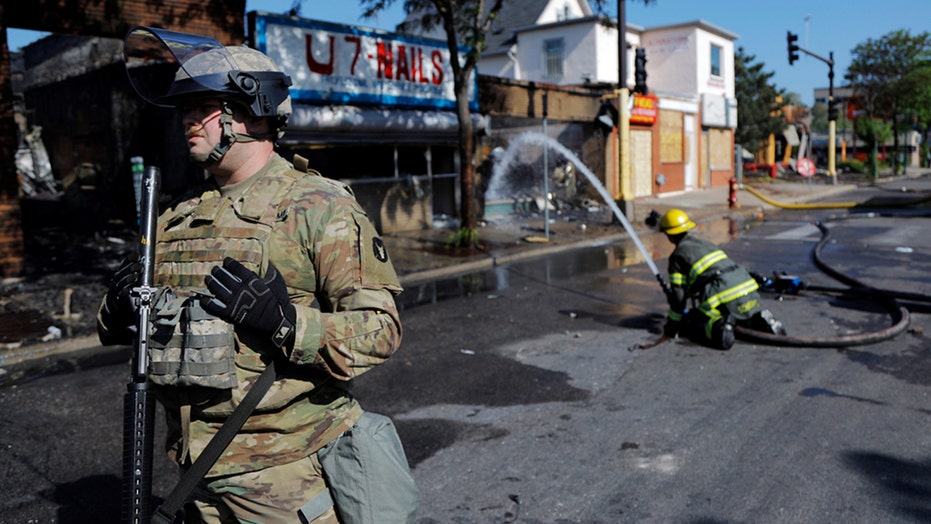 Governors in nearly a dozen states plus the District of Columbia have now activated the National Guard amid protests and riots that have broken out in response to George Floyd’s death in Minneapolis police custody earlier this week.

"Based on circumstances going on in Reno and at the request of local leaders, I have activated members of the @nvnationalguard to secure government buildings," Nevada Gov. Steve Sisolak tweeted early Sunday, Eastern time.

LA MAYOR GARCETTI CALLS FOR NATIONAL GUARD HELP: 'THIS IS NO LONGER A PROTEST. THIS IS DESTRUCTION'

Tennessee Gov. Bill Lee also activated the National Guard, at the request of the mayor of Nashville.

"I am authorizing the National Guard to mobilize in response to protests that have now taken a violent, unlawful turn in Nashville," he tweeted. "The threat to both peace and property is unacceptable and we will work with local law enforcement and community leaders to restore safety and order. This is not a reflection of our state or the fundamental American right to peaceful protest."

Georgia Gov. Brian Kemp, after discussions with state and local leaders, also signed an order "authorizing the activation of up to 3,000 National Guard troops statewide ahead of several planned protests on Sunday, May 31."

"These highly trained citizen soldiers will partner will law enforcement to preserve peace and protect Georgians in every corner of our great state," he added.

Kemp's move comes amid protests in Atlanta, and across the state Saturday.

Earlier in the night, Abbott announced he was activating the National Guard, saying: “Texans have every right to exercise their first amendment rights, but violence and looting will not be tolerated.”

Kemp and Abbott and Parson joined Utah, Ohio and Washington state in bringing in the National Guard to aid law enforcement.

“I have activated the National Guard to help control the escalating situation in downtown Salt Lake City,” Herbert tweeted. “I once again call on all who are protesting to do so peacefully.”

"In this time of deep anger, sadness, and frustration, we stand with those who are expressing their First Amendment rights, but we will not stand for those who wish to inflict pain and cause destruction," DeWine tweeted.

AMERICA BRACES FOR ANOTHER NIGHT OF UNREST AS PROTESTERS, POLICE CLASH IN MAJOR CITIES

"They will be unarmed and assist with infrastructure protection and crowd movement," Inslee said in a statement Saturday. "They will only be utilized if absolutely necessary and we appreciate their efforts to help in this important work."

The District of Columbia National Guard also was activated Saturday night “at the direction of the Secretary of the Army in response to a request for assistance from the U.S. Park Police to help maintain order during protests in the vicinity of the White House,” D.C. National Guard Commanding General MG William J. Walker said in a statement.

“The DCNG, the Nation’s only Federal National Guard, reports to the President of the United States through the Secretary of Defense and the Secretary of the Army,” Walker said. “The DCNG is always ready to assist District and Federal agencies to protect human life and property.”

"This is no longer a protest,” Garcetti told local media Saturday night. “This is destruction. This is vandalism.”

The activation of the National Guard in states across the nation comes after Minnesota Gov. Tim Walz already announced early Saturday that he authorized the “full mobilization” of the state’s National Guard in response to violent riots in the state.

Minnesota’s National Guard is composed of more than 13,000 soldiers, according to the Guard’s 2019 annual report.

Floyd’s death Monday has sparked unrest across the U.S., from New York City to Washington, D.C., to Chicago to Los Angeles. Four Minneapolis police officers were fired Tuesday, while the officer seen kneeling on Floyd's neck for several minutes before he eventually died, Derek Chauvin, has been arrested and charged with third-degree murder and manslaughter.