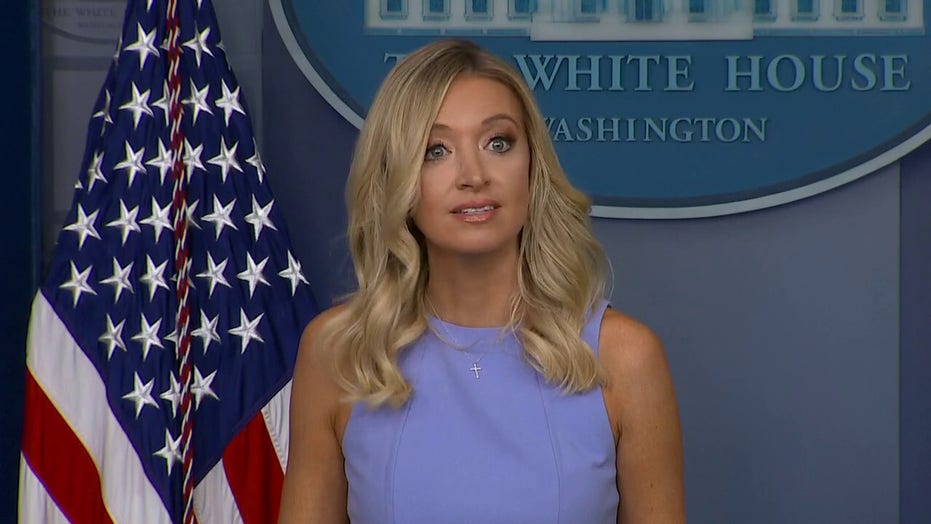 McEnany on COVID-19: Those concerned about Trump rally goers should exhibit same feelings towards protesters

House Speaker Nancy Pelosi, D-Calif., accused President Trump Wednesday of embarking on an "ego trip" by scheduling a campaign rally in Tulsa, Okla., which she said could put him and others in danger of contracting coronavirus.

"For the president to have this ego trip that he wants to take to Tulsa to have a mass rally of people coming together, endangering their own health and the people that they go home to ... " she told CNN, adding that the rally was "a danger to the President himself, and he’s our president. We don’t want him to be endangered. But we don't want to be foolish about it."

Saturday's rally will be held at the BOK Center, a 19,000-seat venue that has canceled all other events through the end of July. Scientists believe the virus spreads far more easily in crowded, enclosed spaces than it does outdoors, where circulating air has a better chance of dispersing virus particles.

The Trump campaign has asked rally attendees to sign a waiver acknowledging the risk of contracting the virus and absolving the campaign of responsibility should they get sick. The campaign has also promised that each attendee's temperature will be checked and rallygoers will receive a mask and hand sanitizer as they enter.

Despite the precautions, Sen. James Lankford, R-Okla. has urged senior citizens not to attend the rally.

On Wednesay, Tulsa County reported 96 new COVID-19 cases. In all, the county has 1,825 confirmed cases, more than any other county in the state.

Pelosi also accused the Trump administration of not doing enough to address the pandemic, pointing specifically to the need for increased testing.

"I’m a mom and a I'm a grandmother and I just can’t even tolerate the thought that the leadership in our country, where we’re putting important money, giving them important money for all of these things, and they are ignoring the need that we have for increased testing, tracing, treatment, and separation, wearing masks and the rest," she said.

LARA TRUMP FIRES BACK AT CRITICS OF TULSA RALLY: 'NOBODY HAS TO ATTEND THE RALLY. THIS IS A CHOICE'

Vice President Mike Pence has defended the administration's response, arguing that the U.S. "expanded testing across the board."

"At the end of February, between Centers for Disease Control and Prevention labs and state public health facilities, the U.S. had performed only about 8,000 coronavirus tests. As of this week, we are performing roughly 500,000 tests a day, and more than 23 million tests have been performed in total," he wrote in a Wall Street Journal op-ed published Tuesday.

Americans, Pence indicated, should celebrate the progress the administration made combatting the virus.

"We’ve slowed the spread, we’ve cared for the most vulnerable, we’ve saved lives, and we’ve created a solid foundation for whatever challenges we may face in the future. That’s a cause for celebration, not the media’s fear mongering," he said.

The Associated Press and Fox News' Marisa Schultz contributed to this report.