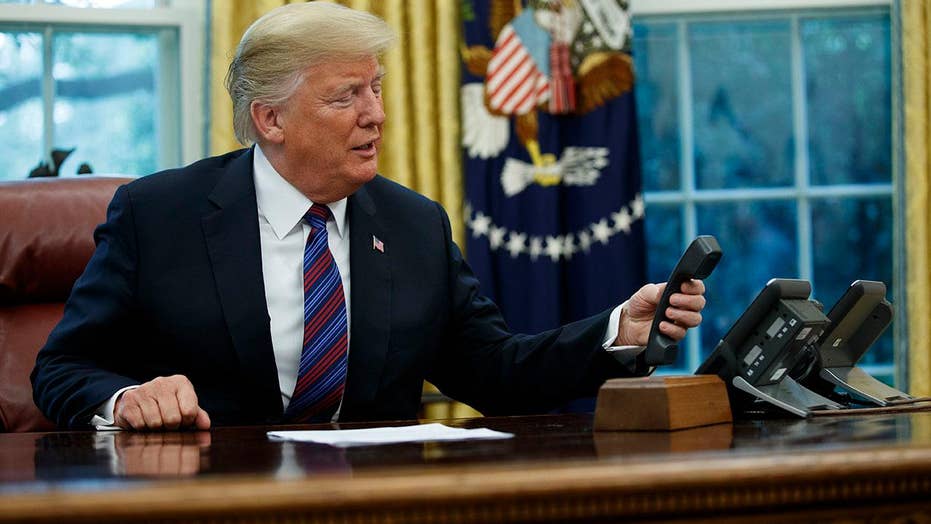 Is the US-Mexico trade deal a political victory for Trump?

Market soars as President Trump strikes a trade deal with Mexico. On 'The Story,' Univision News anchor Enrique Acevedo says the deal is a win for Mexico.

A media leak of off-record comments by President Trump has roiled the high-wire negotiations with Canada over the North American Free Trade Agreement.

Trump has been trying to negotiate a new NAFTA with both trading partners. He announced Monday that he has secured a tentative deal with Mexico and said “we’ll see” if Canada can be part of the new agreement. The administration had set a deadline of Friday for a deal with Canada.

But The Toronto Star reports that it obtained comments from an off-the-record portion of an Oval Office interview between Trump and Bloomberg News. In those remarks, Trump said he isn’t making compromises with Prime Minister Justin Trudeau’s government, but isn’t going to say so publicly because “it’s going to be so insulting they’re not going to be able to make a deal.”

In another remark he did not want published, Trump said the deal would be “totally on our terms” and reportedly suggested he had tried to spook the Canadians with the threat of auto tariffs.

President Trump and Canadian PM Justin Trudeau have had an uncomfortable relationship at times. (AP)

After the article was published, Trump slammed the media via Twitter for "BLATANTLY" violating the interview terms, while seeking to assure Canada.

"Wow, I made OFF THE RECORD COMMENTS to Bloomberg concerning Canada, and this powerful understanding was BLATANTLY VIOLATED. Oh well, just more dishonest reporting. I am used to it. At least Canada knows where I stand!" he tweeted.

On the record, Trump had told Bloomberg that a deal was “close."

"I think Canada’s going to make a deal at some point. It may be by Friday, or it may be within a period of time. But ultimately they have no choice," he said.

But then, according to The Star, he also reportedly said, “Off the record: totally on our terms. Totally.”

The comments have since made their way to Trudeau's government, causing problems for the talks.

The Star reported that they asked his administration about the remarks right before a critical meeting Friday. Further, the Star reported that Trudeau's team "saw them as confirmation of its suspicions that Trump’s team has not been truly planning to compromise" -- and raised the quotes to American negotiators at the beginning of Friday's meeting.

White House spokeswoman Lindsay Walters said in a statement: "The Canadian and American negotiators continue to work on reaching a win-win deal that benefits both countries."

Asked for comment, the Canadian government referred to statements made by Trudeau, who said, "We will only sign a deal if it is a good deal for Canada. Again, no deal is better than a bad deal for Canada and for Canadians and that’s exactly what we are remaining firm on."

It's unclear how the Star even obtained the off-record comments. The article said they were obtained by a "source," and Bloomberg's editor-in-chief did not dispute them.

A Bloomberg spokesman told Fox News: "When we agree that something is off the record, we respect that."

Daniel Dale, the Star reporter whose name was on the article, said that the Canadian side was “complaining to me about the Trump team showing no flexibility even before I asked them for comment this morning on the Trump quotes.”

“They see the quotes as confirmation of suspicions that the Trump team isn't working to make a win-win deal today,” he tweeted.

In August, Trump threatened Canada with auto tariffs if the U.S. and Canada can't forge a deal.

Trump has been a critic of NAFTA for decades and during his presidential campaign described it as “the worst trade deal maybe ever signed anywhere.”