But Nadler took a very different stance on contempt back in 2012, when House Republicans took the same step against then-AG Eric Holder for refusing to hand over documents related to the Fast and Furious gun-running scandal, where DOJ officials tracked thousands of guns smuggled across the border but did nothing to stop them.

He joined more than 100 Democrats in walking out over the vote to hold the Obama-era DOJ leader in contempt.

Then-House Minority Leader Nancy Pelosi, D-Calif., argued House Republicans were more politically motivated in attacking Holder than driven to get to the bottom of the failed operation.

“What is happening here is shameful," said Pelosi. 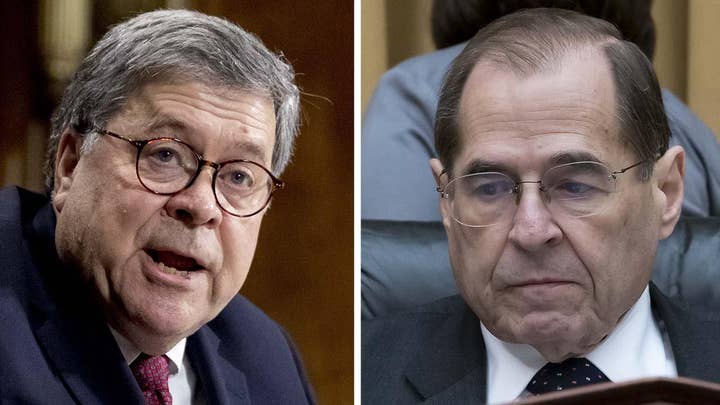 After the contempt vote on Wednesday, conservatives pointed to the vintage Nadler tweet as an example of a double standard.

“Nadler now says the White House ‘stonewalling’ Congress represents an attack on ‘the essence of our democracy’ – as though stonewalling were some new phenomena,” former Rep. Jason Chaffetz, R-Utah, said in an op-ed for Fox News. “Where was Nadler's righteous indignation when the stonewalling came from a Democratic White House?”

Nadler's office did not immediately respond to a request for comment from Fox News.

Nadler was also accused of hypocrisy last month by GOP critics for his subpoena of the unredacted Mueller report, with critics pointing to video from the Clinton days showing him urging caution regarding the release of details from then-Independent Counsel Kenneth Starr's report.

Nadler maintained he has been consistent in both cases -- calling in 1998 and the present day for the committee to first review the documents, acknowledging in both cases concerns about the release of grand jury materials to the general public.

Democrats aren't the only ones switching sides on contempt. Republicans who voted for Holder to be held in contempt in 2012 dismissed the vote this week as the Democrats’ latest effort to drag out the Russia controversy in the wake of the Mueller report.

But Republicans argue that the fight over the Fast and the Furious scandal was more substantive.

“The fight with Barr is a political stunt,” Sen. Marco Rubio, R-Fla., said this week. “Real oversight was when House sought documents about #FastandFurious an Eric Holder program that allowed guns to reach drug cartels in Mexico."

Chaffetz said the Congress should hold fast to its subpoena power, “but they need a winning case (Barr wins this case easily), and a principled backbone of consistency.”

“America should not mistake this charade by the Democrats for a principled stand,” he wrote. “Not when the principles shift with the political fortunes of the Democratic Party.”

The fight over documents in the 2012 controversy seemed to resolve only this week when a settlement was reached between the House and DOJ. According to Politico, both sides said they maintained their disagreements but were dropping their appeals and the underlying lawsuit.