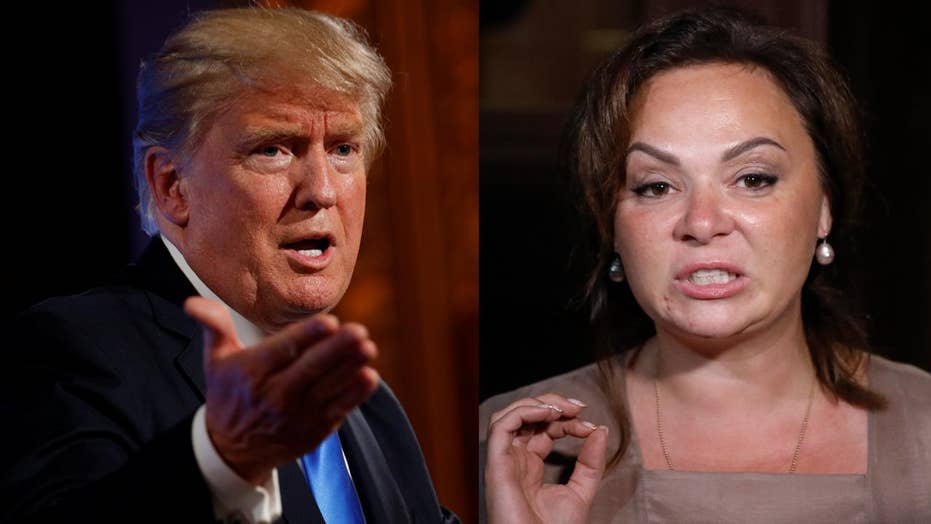 Trump Jr Russia meeting: Who is to blame?

The Trump administration is shifting the blame for Donald Trump Jr’s meeting with a Russian lawyer, onto the Obama administration, for allowing Natalia Veselnitskaya into the US

The Russian attorney whose campaign-season meeting with Donald Trump Jr. has caused headaches for the White House was cleared to enter the U.S. at the time of the visit by the Obama State Department, officials confirmed to Fox News late Thursday.

A brief timeline released overnight helps to resolve questions over how Natalia Veselnitskaya even had legal permission to be in the U.S. And it also shows multiple Obama agencies were involved on multiple occasions in granting access to the lawyer after she was initially denied a visa.

According to the timeline released by the Department of Homeland Security, the Obama Justice and Homeland Security departments granted her a special type of “parole” to be in the U.S. from September 2015 through February 2016 to work on a court case in New York. After that expired, according to DHS, the State Department issued her a B1/B2 non-immigrant visa in June 2016, according to DHS, just in time for her meeting with Trump Jr., Trump son-in-law Jared Kushner and then-campaign chairman Paul Manafort.

That newly revealed meeting has revived congressional scrutiny of the campaign’s alleged coordination with Russia, since an intermediary told Trump Jr. the lawyer could have dirt on Hillary Clinton as part of the Russian government’s bid to help his dad.

While Trump Jr. has since said, in hindsight, he would have done things differently, his father on Thursday took a more defiant tone and seemed to blame the Obama administration for letting the lawyer into the country.

Her unusual entry into the U.S. has sparked a furious round of finger-pointing among federal agencies, and the buck appears to stop at the State Department, with assistance from both DOJ and DHS.

But the timeline released overnight at least clarifies how she had approval to be in the U.S., if not why.

“Ms. Veselnitskaya was subsequently paroled into the U.S. several times between 2015 and 2016, ending in February 2016. In June 2016, she was issued a B1/B2 nonimmigrant visa by the U.S. Department of State,” a DHS spokesperson told Fox News Thursday night.

DHS officials also said that it was their agency “in concurrence with the U.S. Attorney's Office of Southern District of New York” which paroled Veselnitskaya into the U.S. Fox News confirmed through court documents that Veselnitskaya initially “applied for a visa to enter the United States, but was denied.”

Preet Bharara was the U.S. attorney for the Southern District of New York at the time the parole was granted.

Veselnitskaya was issued a “Significant Public Benefit Parole” document on Sept. 25, 2015, according to DHS, which expired on Jan. 7, 2016. Veselnitskaya requested an extension to continue her work on the case, but the Southern District of New York’s attorneys’ office denied her request.

“She was not granted a second parole by our office,” SDNY spokesman James Margolin told Fox news in an email. “Her case-related immigration parole ended early in 2016, and it was not renewed by us.”

The U.S. attorney’s office told Fox News on Thursday that Veselnitskaya was indeed granted initial parole by their office, but did not know who, specifically, issued the “piece of paper.”

“Somebody said that her visa or passport to come into the country was approved by Attorney General Lynch, now maybe that’s wrong, I just heard that a little while ago…[that] she was here because of Lynch,” Trump said at a joint press conference with French President Emmanuel Macron on Thursday in Paris.

The State Department did not respond to Fox News’ request to confirm that they issued Veselnitskaya a B1/B2 non-immigrant visa, or comment on Veselnitskaya’s current immigration status.

It is unclear as to why Veselnitskaya was denied a visa initially by the Obama State Department, and then granted one in later months.

Acting Chief of Media Relations for U.S. Citizenship and Immigration Services Gillian Christensen told Fox News on Thursday that a range of DHS agencies would typically deal with parole requests, but USCIS was not involved in this particular case.

The type of parole Veselnitskaya was granted is given “sparingly” and in “extraordinary circumstances,” including urgent humanitarian reasons, such as medical or family emergency. Broadly speaking, Christensen told Fox News that parole may be requested for a person who “believes his or her presence in the United States will be a significant public benefit,” and cited participation in a civil court case as an example.

“Parole allows an individual to enter the United States and remain for a temporary period corresponding to the reason parole was approved,” Christensen told Fox News. “Parole is not generally authorized for more than one year.”

Veselnitskaya was working as an attorney for a Cyprus-based real estate holdings company called Prevezon, run by Denis Katsyv, son of Pyotr Katsyv, one of Russian President Vladimir Putin’s closest advisers, and was given “unlimited resources” by the Kremlin-connected group to run a campaign to get the Magnitsky Act repealed, Fox News reported Wednesday. The Magnitsky Act enacts sanctions on certain Russian officials as a punishment for human rights violations.