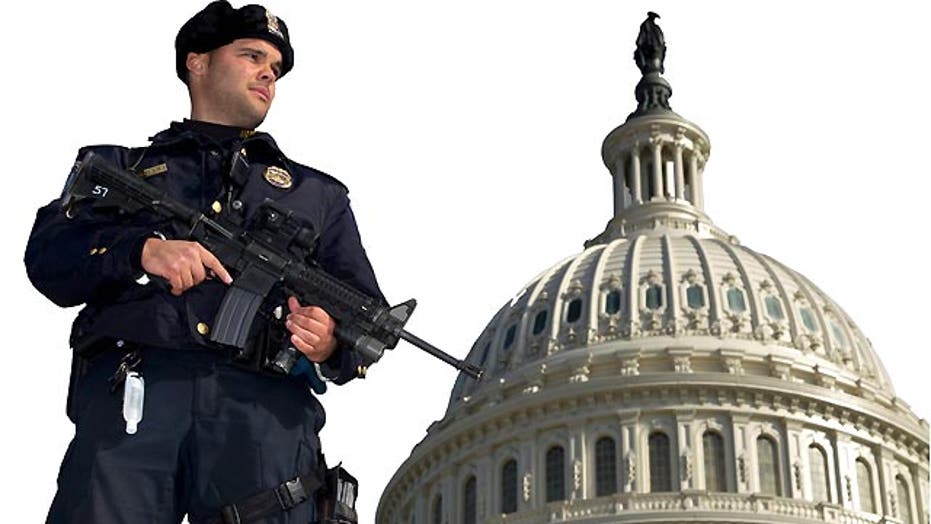 FBI reveals plot by suspected ISIS terrorist on US Capitol

The United States Capitol is one of the most dangerous buildings in the world.

If you had doubt about that premise, examine the two security scenarios that unfolded within 24 hours of one another this week.

The feds indicted 44-year-old Michael Robert Hoyt and accused him of planning to "murder" House Speaker John Boehner, R-Ohio, second in line to the presidency. Hoyt formerly tended bar at Boehner's country club north of Cincinnati. Hoyt told the FBI and U.S. Capitol Police he could have easily slipped something into Boehner's drink at the club. He talked about shooting Boehner, believing the speaker was responsible for Ebola. Hoyt said the Ohio Republican was "mean" to him -- a charge Boehner refutes in court paperwork when interviewed by police.

In the criminal complaint, authorities said they were particularly worried about Hoyt because by working at the club, he was familiar with the speaker's "travel and leisure habits."

"He really spooked us," said one congressional source familiar with the investigation who asked not to be identified. "There was a lot of cause for concern. [Hoyt's] unstable."

Hoyt's home is on the east side of Cincinnati in the suburb of Deer Park, Ohio. But by Wednesday afternoon, the FBI and U.S. Capitol Police were focused on the west side of the Queen City. Specifically, Chris Cornell of Green Township and the Point Blank Range & Gunshop in Colerain Township. That's where police say Cornell bought a pair of AR-15 semiautomatic rifles and 600 rounds of ammunition before he was arrested.

Court documents assert that Cornell planned to come to Washington, place pipe bombs around the Capitol and detonate them. His goal was then to shoot lawmakers and congressional aides as they fled the building for safety.

Congressional sources tell Fox News that Cornell's plan was only "aspirational" and that the public was never in any danger. The episode is reminiscent of a sting the FBI carried out three years ago involving 29-year-old Moroccan native Amine El Khalifi. He wanted to strap on a suicide bomber's vest, walk up to the Capitol and sacrifice himself, killing "30 people" in the process. El Khalifi sure got the vest. At least one he thought was operational. It wasn't. Instead, the feds outfitted El Khalifi with a fake vest. They then nabbed him at the foot of Capitol Hill.

The public was never in any danger.

But, in the wake of the latest arrest, House Sergeant at Arms Paul Irving reminded lawmakers and aides of the ever-present security risks.

"With this arrest, we are again reminded that the United States, and especially the Capitol complex, remains a potential target for terrorists -- be they organized attacks or so-called 'lone wolf' assaults," he wrote in a message to congressional offices, urging members to "maintain vigilance and security awareness at all times."

It is said that the terrorists only have to get it right once. Those who guard against terrorism risks must be right 100 percent of the time. So here there's one individual whom court papers suggest has a history of mental illness. In the other instance, there's someone who wishes to declare jihad against the most-visible citadel freedom in the world: the U.S. Capitol. That's the common denominator: people who wish to reap mayhem and carnage look to the Capitol and its leaders.

The U.S. Capitol isn't a fortress like the White House -- although a sequence of fence-jumping incidents revealed gaping security vulnerabilities last year. The U.S. Capitol is an open campus. Sure, you can't drive close to the Capitol. Some streets are closed to vehicular traffic. You have to have an appointment or a hard pass to get into the Capitol itself. The Capitol Police screen everyone before entering the Capitol or the adjacent House and Senate office buildings. But for the most part, it's an open place.

Anyone can stroll up to the edge of the Capitol, take pictures, eat lunch or whatever, for as long as they like. Anyone can go through security and aimlessly wander the hallways of the Hart Senate Office Building or the Longworth House Office Building. No one will know who you are or care. Anyone in the world can waltz up to the Capitol Visitor's Center, go through the magnetometers and embark on a formal Capitol tour. No one will check your ID. No one will even know you were there. Certainly, an array of security cameras which surveil the place may document your presence there. But there's no background check to get in. No questions. You just show up. And you can do that without so much as a query as to who you are, what your business is and why you're there.

That is the beauty of the Capitol. It's not the White House or any other office in the Executive Branch where the public doesn't necessarily get access. By its nature, Congress is the people's branch. Access to lawmakers -- whether it's a formal sit-down with lawmakers in their offices with a bunch of wing-tipped, K Street lobbyists, or middle schoolers on an informal drop-by as part of a Washington trip -- weigh the same when it comes to Capitol Hill security.

Some of this is guaranteed in the First Amendment. The public has a right "to petition the Government for a redress of grievances." Certainly people may write and call federal agencies over policies and administrative rules with which they disagree. But they can also show up at the Capitol, walk right up to the building and buttonhole lawmakers as they cross Independence Avenue, heading to the chamber to vote. They can stroll around Cannon, dropping off position papers to educate staff and members about their agendas.

The "or" here is the troublesome part.

"Or" they can show up at the Capitol complex, roam about freely and cause pandemonium and potentially even harm those who work in Congress.

That is the bizarre yet seemingly necessary security tradeoff on Capitol Hill. And the deepest, darkest secret of all in Congress is that this conundrum does keep Capitol Hill security officials up at night.

It's a tough balancing act.

Over the years, there's been talk of constructing an outer security perimeter around the Capitol campus. In other words, everyone has free access. But they'd have to go through security at a much greater distance away from the buildings. That would unquestionably make the Capitol more secure. But how much would such an arrangement infringe on basic freedoms? What about immediate access to lawmakers and First Amendment rights to complain and yell and scream about your issue of importance on the Capitol grounds? Would such an amplified security posture derail that fundamental right?

The point is that people like the suspects from greater Cincinnati exist. They may want to take out the speaker of the House. They may plan to kill and maim with reckless abandon. Even check out the offensive social media postings from people who are giddy that Senate Minority Leader Harry Reid, D-Nev., badly injured himself while exercising at home.

It all comes down to the emblems. The speaker of the House. The Capitol building itself. Want to make a point? Go for high-profile, big targets. Then everyone will know you were serious.

That is the lot of the United States Capitol. Always in the crosshairs because of its role symbolically and operationally in American government.

And that makes it a pretty dangerous place.