Can we expect to hear anything from Mueller we don't already know?

Former Special Counsel Robert Mueller said Wednesday that he would not discuss any information regarding the origins of the Russia investigation—including questions about the bureau’s initial probe and the now-infamous anti-Trump dossier—during his highly anticipated hearing on Capitol Hill.

During his opening statement before the House Judiciary Committee, Mueller again expressed his reluctance as an appointed prosecutor to testify before Congress and warned that he would not answer certain questions.

“It is unusual for a prosecutor to testify about a criminal investigation and given my role as a prosecutor there are reasons why my testimony will be limited,” Mueller said Wednesday, noting that his public testimony could influence “ongoing matters.”

“Those matters are subject to review and any questions on that should be directed to the FBI or the Department of Justice,” Mueller said,  referring in part to the dossier compiled by Christopher Steele. 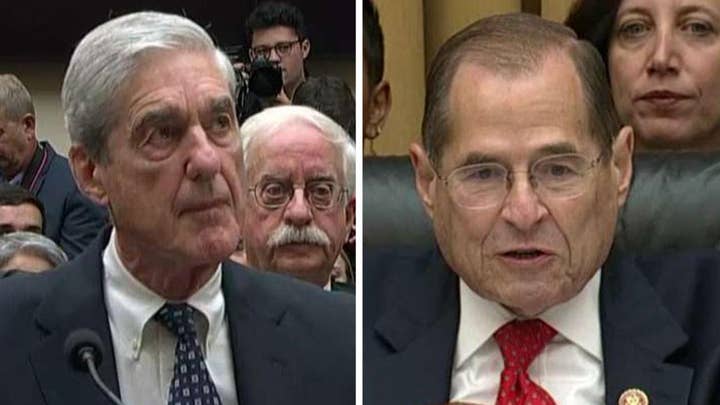 Republicans on both committees planned to focus their questions on the origins of the Russia investigation—including questions on Foreign Intelligence Surveillance Act (FISA) warrants against the Trump campaign in 2016, the unverified anti-Trump dossier, and evidence of political bias from special counsel team members like former FBI officials Peter Strzok and Lisa Page.

One Republican source told Fox News Tuesday that they expected Mueller “to try to get out of answering a lot of those questions,” and claimed they are “outside the bounds” of his report—specifically on the issue of how the FBI could have used the dossier to obtain FISA warrants. The source said he may also say that “those questions are subject to ongoing investigation.”

The Justice Department told Mueller that his testimony “must remain within the boundaries” of the public, redacted version of his report, according to a letter obtained by Fox News.

“We’re not expecting him to be forthcoming with answers on that stuff, one way or another,” the source told Fox News on Tuesday.

At the White House, President Trump has attempted to discredit Mueller by calling him “highly conflicted,” suggesting he should not be given the chance to testify.

“Highly conflicted Robert Mueller should not be given another bite at the apple. In the end it will be bad for him and the phony Democrats in Congress who have done nothing but waste time on this ridiculous Witch Hunt,” Trump tweeted Monday. “Result of the Mueller Report, NO COLLUSION, NO OBSTRUCTION.”

Meanwhile, Democrats on both committees are expected to focus their questions on five areas in Mueller’s report having to do with his inquiry on “obstruction,” rather than on accusations of the Trump campaign colluding with the Russians, in an attempt to expose potential wrongdoing by the president.

Among the topics they are expected to focus on: Trump’s reported call to then-White House Counsel Don McGahn to remove Mueller; the claim the president ordered McGahn to deny he told him to try to get rid of Mueller; allegations the president told former campaign manager Corey Lewandowski to instruct then-Attorney General Jeff Sessions to curb the probe; the dangling of pardons to former campaign manager Paul Manafort; and allegations of witness tampering, including with Manafort.

Mueller, during his opening statement, addressed the special counsel team's decision not to come to a conclusion on whether the president committed a crime.

"As described in Volume II of our report, we investigated a series of actions by the president and based on Department of Justice policy and principles of fairness, we decided we would not make a determination as to whether the president committed a crime," Mueller said. "It was our decision then and it remains our decision today,"