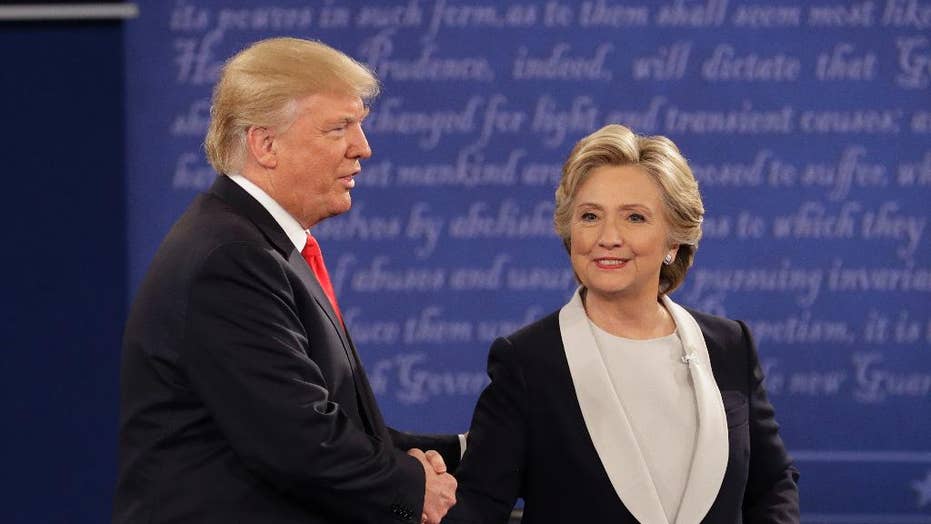 As President Trump and Joe Biden prepare for their first highly-anticipated debate on Tuesday, here's a look back at some of the most memorable -- and perhaps embarrassing -- televised debate moments in U.S. political history:

Nixon, not ready for his close-up

It was the first nationally televised debate. Republican Vice President Richard Nixon, reeling off a severe bout of the flu that had left him hospitalized, refused makeup to improve his pale appearance and used a handkerchief to wipe off sweat numerous times. Sen. John F. Kennedy appeared healthy, tanned and comfortable on stage.

The Democrat had been an underdog at the time, but he soon capitalized off his youth and vigor, coining the slogan, "Who's seasoned through and through/but not so dog-gone seasoned that he won't try something new."

At his second debate, President Gerald Ford asserted: “There is no Soviet domination of Eastern Europe, and there never will be under a Ford administration.” Asked to clarify, the Republican said he doesn’t believe the Poles and others consider themselves “dominated” by the Soviet Union.

Democrat Jimmy Carter fired back, “I’d like to see Mr. Ford convince Polish-Americans and Czech-Americans and Hungarian-Americans that those countries don’t live under the supervision and control of the Soviet Union.”

"I will not make age an issue of this campaign. I am not going to exploit, for political purposes, my opponent's youth and inexperience.”

President Ronald Reagan, 73 at the time, had been asked if his age would hinder his ability to be commander in chief.

The witty response, which even drew a laugh from Democratic challenger Walter Mondale, 56 -- became an instant classic.

Democrat Michael Dukakis, branded weak on crime by Republican Vice President George H.W. Bush, was asked by moderator Bernard Shaw if he would favor putting a man to death who had hypothetically raped and murdered his wife.

Dukakis responded: “No, I don’t, Bernard."

"I think you know that I've opposed the death penalty during all of my life,” Dukakis added.

Asked about gender pay equity, Republican Mitt Romney recalled his time as governor of Massachusetts. "I had the chance to pull together a cabinet, and all the applicants seemed to be men,” Romney said. “I went to a number of women's groups and said, 'Can you help us find folks?' And they brought us whole binders full of women.”

At a campaign stop later, Democrat Barack Obama seized on his riival's comment: "I've got to tell you, we don't have to collect a bunch of binders to find qualified, talented, driven young women.”

“You mentioned the Navy, for example, and that we have fewer ships than we did in 1916. Well, governor, we also have fewer horses and bayonets, because the nature of our military’s changed.”

Obama, the incumbent, made the sacrastic comment while debating Romney.

"I think Gov. Romney maybe hasn’t spent enough time looking at how our military works,” Obama said. "We have these things called aircraft carriers, where planes land on them. We have these ships that go underwater, nuclear submarines."

"The 1980s are now calling to ask for their foreign policy back because the Cold War's been over for 20 years,” Obama told Romney, in one of the biggest zingers of the debate. The president was trying to dismiss Romney’s assertion that Russia was America's "No. 1 geopolitical foe."

"One of the things people love about you is you speak your mind, and you don't use a politician's filter," debate moderator Megyn Kelly said to Trump at the beginning of the debate. "However, that is not without its downsides, in particular, when it comes to women. You've called women you don't like 'fat pigs,' 'dogs,' 'slobs,' and 'disgusting animals.'"

Trump interrupted Kelly and quipped, "Only Rosie O'Donnell." The crowd roared with applause and laughter.

It was the night Republicans realized what Trump lacked in political experience he made up for show-stopping wise cracks, and they’d be hard-pressed to outshine his decades of reality TV experience.

Trump tells Clinton she’d be in jail if he was in charge.

“It’s just awfully good that someone with the temperament of Donald Trump isn’t in charge of our country,” Clinton said.

“Because you’d be in jail,” Trump responded.

He had told his opponent if he was elected he’d get his attorney general to appoint a special prosecutor “to look into your situation.”

“People... their lives have been destroyed for doing one-fifth of what you’ve done,” Trump said.