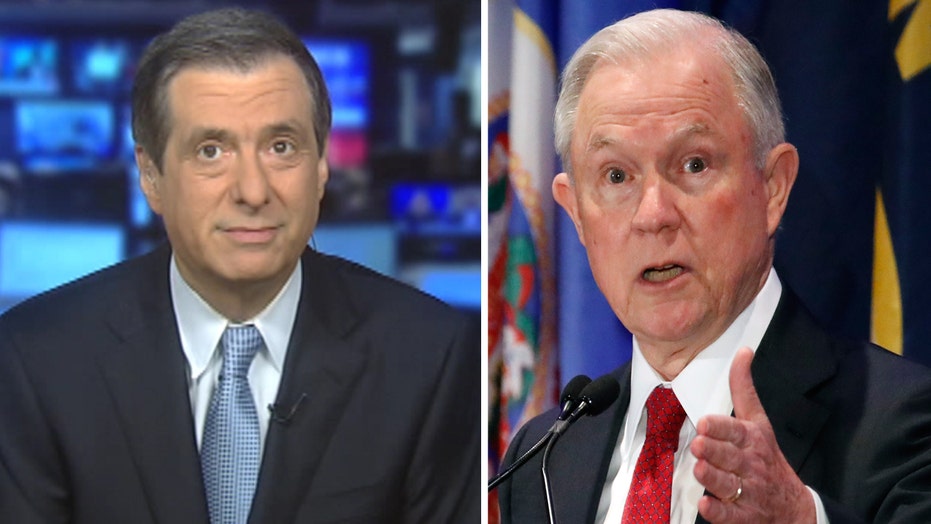 Kurtz: Why Sessions had to act quickly

You know you’ve got a problem when the political world is debating whether you should recuse or resign.

And that’s where Jeff Sessions found himself after the Washington Post story ignited a media firestorm over his past contacts with the Russian ambassador.

Donald Trump’s unusual burst of good press over that speech to Congress lasted all of 24 hours.

Just as the president and his press secretary seemed to be digging in, the attorney general took some air out of the story by holding a news conference and announcing that after consulting with ethics officials, he has recused himself from any FBI investigation of Russia and the campaign. That is a whole lot better place to be than the bunker.

It’s important to emphasize, as the Democrats go to Defcon 1, that Sessions’ conversations with the Russian envoy may turn out to be nothing.

But the question of whether the attorney general misled Congress is fueling the controversy that utterly dominated cable news yesterday, especially with Chuck Schumer and Nancy Pelosi holding pressers to say Sessions should step down.

In an endless loop, TV has been replaying Sessions telling Al Franken during his confirmation hearing: “I have been called a surrogate at a time or two in that campaign and I did not have communications with the Russians.”

“Absolutely nothing misleading in his answer,” says his spokeswoman, Sarah Isgur Flores.

When Sessions maintains that his two contacts with Sergey Kislyak, one of them a meeting in his Senate office, had nothing to do with his role as a key Trump surrogate, it can sound like splitting hairs. But he was smart to take questions from reporters rather than just reading a statement before the cameras. That made it look like he had nothing to hide.

Sessions acted after Jason Chaffetz and other Republican lawmakers who said he should recuse himself from the probe, which is looking at a period when Moscow was involved in hacking the Democrats.

“The previously undisclosed discussions could fuel new congressional calls for the appointment of a special counsel to investigate Russia’s alleged role in the 2016 presidential election,” the Post story said. That happened immediately.

Sean Spicer told “Fox & Friends” that Sessions was “100 percent straight” with the committee and that Democrats are pushing a “false narrative” for partisan purposes. And the president briefly told reporters he didn’t know about Sessions’ contacts with Kislyak but didn’t think he should recuse himself. So Sessions showed that on this matter, he’s not following the White House line.

As the Post story hit, the New York Times reported that some Obama White House officials in the final days “scrambled to spread information” across the government about Trump associates’ contacts with Russia “to ensure that such meddling isn’t duplicated in future American or European elections, and to leave a clear trail of intelligence for government investigators.”

There is still no proof that anything nefarious happened between Trump, his campaign or his associates and the Russian government.

But having covered every special prosecutor investigation, including Iran-contra and Clinton/Whitewater/Lewinsky, I know this:

One, if some kind of independent counsel is named, that person can take the probe in unexpected directions.

Two, had Sessions not acted, the political pressure for Sessions to bow out of the investigation would have built to a fever pitch.

Three, the media are going to be like a dog with a bone on this story and keep barking and digging.

Remember, Mike Flynn dug in on his own contacts with the ambassador, refusing to give an inch, and wound up losing his job. Jeff Sessions showed yesterday that he has better political instincts.