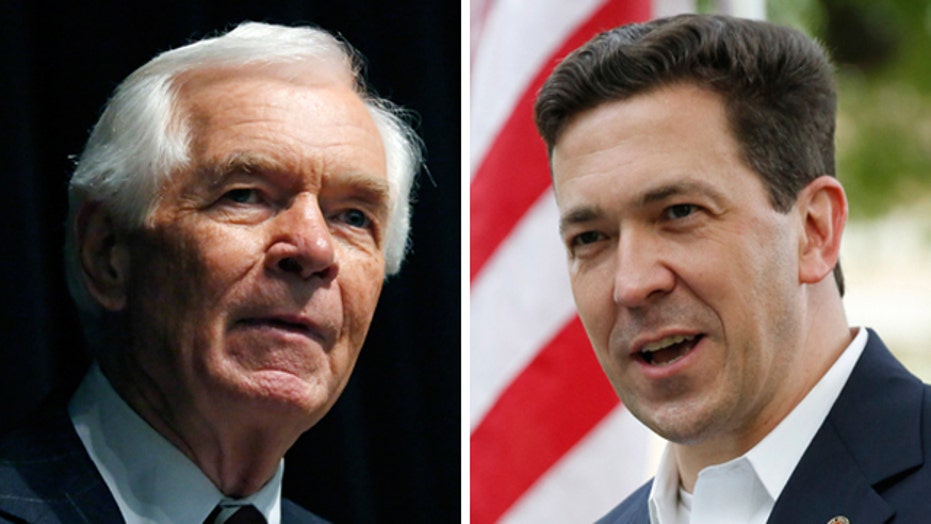 McDaniel had nudged ahead of Cochran early Wednesday, with 98 percent of the state's precincts reporting. McDaniel garnered 49.6 percent of the vote to Cochran's 48.8 percent.

The nail-biting race was just one of many in primaries across eight states on Tuesday, all but one of them hosting Senate contests. Iowa held the other closely watched Republican primary, which state Sen. Joni Ernst won. The other Senate primary races were in Montana, New Jersey, New Mexico, Alabama and South Dakota.

Republicans need to win a net six Senate seats this year to take control of the upper chamber.

In Mississippi, the Tea Party-backed McDaniel gave supporters an upbeat speech shortly after midnight at his post-election party.

“Because of your hard work, we sit here tonight leading a 42-year incumbent,” he said. “We will stand victorious. … We will win this fight.”

The 76-year-old Cochran is facing the toughest challenge of his political career against McDaniel, who entered the election deadlocked with the veteran lawmaker.

“It’s been a long night and it’s not over,” said a Cochran campaign staffer. “It looks like a runoff.”

In Iowa, Ernst won the GOP primary. The 43-year-old Ernst won the nomination over five candidates including challenger Mark Jacobs, who led the race early on.

All the Republicans seeking the nomination described themselves as deeply conservative, but Ernst managed to stand out in part due to two television ads. One featured her on a farm, talking about her experience castrating hogs, and the other showed her firing a handgun.

Ernst also received endorsements from a variety of groups and individuals, including the U.S. Chamber of Commerce, National Rifle Association and Sarah Palin.

The Cochran-McDaniel contest drew top billing, featuring a pillar of the GOP establishment who has helped funnel millions of dollars to his state and a younger state lawmaker who drew backing from Tea Party groups and Palin.

The campaign took a turn toward the sensational when four men, all McDaniel supporters, were arrested and charged with surreptitiously taking photographs of the senator's 72-year-old wife, who suffers from dementia and has long lived in a nursing home.

Police said they wanted to use the photo to further allegations that Cochran was having an inappropriate friendship with a female staffer who accompanied him on numerous overseas trips.

The other two Republicans running in the low-budget primary were concrete contractor Brian Goldberg and business professor Murray Sabrin. Bell will in November face incumbent Democratic Sen. Cory Booker, who is considered a heavy favorite.

In South Dakota, former Gov. Mike Rounds won the GOP primary and enters the November race as the favored to win the seat of retiring Democratic Sen. Tim Johnson. He will face Democrat Rick Weiland, who ran unopposed.

Democrats fielded no candidates in Alabama to oppose GOP Sen. Jeff Sessions, who was renominated without primary competition.