What sentence does Michael Flynn deserve?

Former National Security Council Chief of Staff Fred Fleitz weighs in on the circumstances that may influence Michael Flynn’s sentencing.

The filing, one day ahead of Tuesday's planned sentencing hearing for Flynn, came shortly after U.S. District Judge Emmet G. Sullivan issued an order Monday requiring that prosecutors publicly turn over the document.

Sullivan had ordered the special counsel to turn over all government documents and “memoranda” related to the questioning of Flynn last week, after Flynn's attorneys claimed the FBI had discouraged him from bringing a lawyer to the White House interview. Flynn eventually pleaded guilty to making false statements about his contacts with Russia's ambassador, in connection with that meeting.

Last Friday, Mueller met Sullivan’s deadline and provided some documents, some of which were heavily redacted. However, the special counsel did not publicly provide the January 302, leading to speculation as to whether one was ever drafted.

Sullivan's order on Monday stated that Mueller's team had made arguments under seal as to redactions they would need to make to the 302. Sullivan ruled that the redactions were appropriate and that due to "strong presumption in favor of public access to judicial records," the 302 could be made public Monday.

The newly released 302 -- which was finalized on Feb. 15, 2017, just two days after Flynn resigned his post after he misled Vice President Mike Pence about his communications with Russian ambassador Sergey Kislyak -- states that Flynn told agents "not really" when asked if he had told Kislyak not to escalate the diplomatic conflict over sanctions with the U.S. -- although he later admitted in his guilty plea to doing so.

Flynn, in fact, had asked Kislyak to "refrain from escalating the situation in response to sanctions that the United States had imposed on Russia that same day," according to prosecutors, who said Kislyak "had chosen to moderate its response to those sanctions as a result of his request."

Flynn also denied to investigators that he had asked Russia to vote in any particular way at the United Nations.

Apart from a new memo from Mueller's team defending the FBI's handling of the interview -- and saying nothing about the way it was conducted “caused the defendant to make false statements to the FBI” -- the filing last Friday included a January 2017 memo on Flynn from then-FBI Deputy Director Andrew McCabe and a separate 302 detailing a July 19, 2017 interview with then-FBI agent Peter Strzok. Strzok, one of two agents who interviewed Flynn, described that meeting in the document, filed Aug. 22 of that year.

“Judge Sullivan has a well-established history of taking on discovery issues head-on,” Trusty said. “So providing a seven-month-old FBI 302 is absolutely going to be a red flag for the judge, and I can’t imagine there are not going to be questions tomorrow about whether there are contemporaneous notes, or a contemporaneous report, that is in the FBI’s possession.”

Speculation about Sullivan's thinking in the Flynn case is widespread considering he threw out the 2008 conviction of the late Sen. Ted Stevens after government misconduct came to light. Sullivan technically has the authority to toss Flynn’s guilty plea and the charge against him if he concludes the FBI interfered with Flynn’s constitutional right to counsel, though he has given no indications that he intends to do so.

Strzok was removed from the Russia probe in late July 2017 -- just days after he apparently gave the interview that formed the basis for the 302 in Mueller's filing -- for his apparent anti-Trump bias. No audio recording or other documentation of Flynn's comments to the FBI have been produced.

“If a private litigant had not produced a document like this for a federal judge, he would be held in contempt,” former U.S. Attorney Joseph diGenova told Fox News on Monday. “The failure to turn over the single most important document in the Flynn case shows an effort to cover up unethical, unprofessional and illegal conduct by the office of special counsel.” 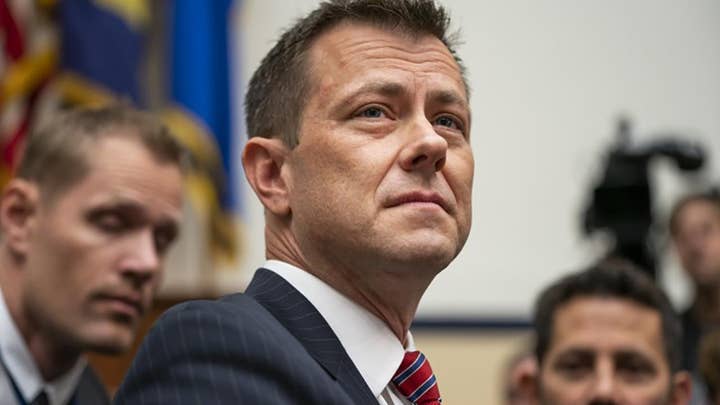 DiGenova, who unofficially has advised President Trump throughout Mueller’s investigation, told Fox News that the absence of the original 302 was “an insult to the court.”

“I have no idea what Sullivan is going to do, but I have faith in him as a fine jurist who will do the right thing,” diGenova said.

Flynn’s January 2017 interview took place before Mueller was appointed special counsel—which did not occur until May 17, 2017, one week after then-FBI Director James Comey was fired.

Last week, Comey was asked how the FBI agents ended up at the White House to interview Flynn in the first place. Comey’s response provided new details about the circumstances that fueled criticism of the bureau’s conduct:

“I sent them,” Comey said in a panel discussion with MSNBC’s Nicolle Wallace, and added that it was “something I probably wouldn’t have done or maybe gotten away with in a more…organized administration.”

The interview was arranged directly with Flynn, he explained, acknowledging this was not standard procedure.

“If the FBI wanted to send agents in to the White House itself to interview a senior official, you would work through the White House counsel, and there would be discussions and approvals of who would be there,” Comey said, describing how things normally would work.

Regarding his decision to bypass those steps, he said: “I thought: It’s early enough, let’s just send a couple guys over.”

Flynn is slated to appear in federal court on Tuesday for his sentencing hearing, which previously was delayed four times.