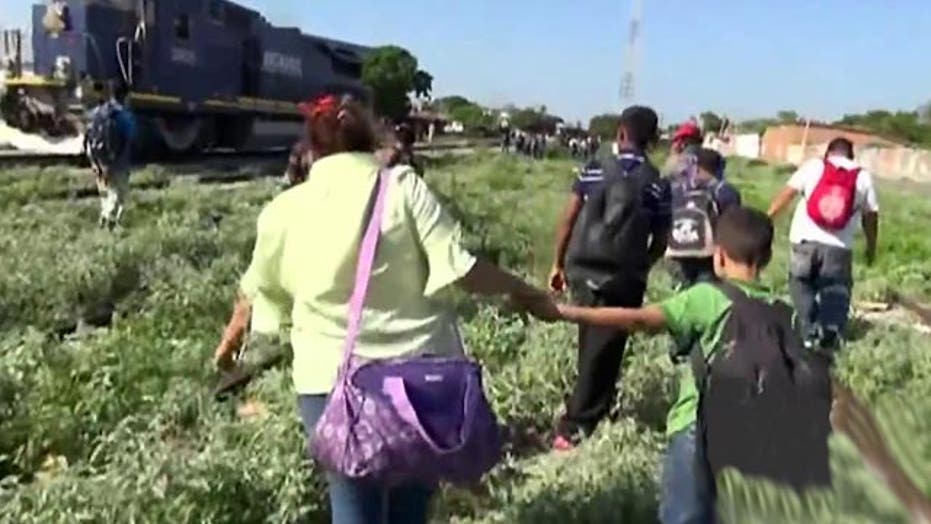 Fear of violence in home country really behind border surge?

A new intelligence assessment concludes that misperceptions about U.S. immigration policy – and not Central American violence – are fueling the surge of thousands of children illegally crossing the Mexican border.

The 10-page July 7 report was issued by the El Paso Intelligence Center (EPIC), which according to the Justice Department website is led by the DEA and incorporates Homeland Security. Its focus is on the collection and distribution of tactical intelligence, information which can immediately be acted on by law enforcement.

"Of the 230 migrants interviewed, 219 cited the primary reason for migrating to the United States was the perception of U.S. immigration laws granting free passes or permisos to UAC (unaccompanied children) and adult females OTMs (other than Mexicans) traveling with minors,” the report said.

Rep. Mario Diaz-Balart, R-Fla., told reporters Tuesday, "It's a critical situation and if we don't deal with it urgently but well- done right- then we're facing a crisis of just huge proportions."

Diaz-Balart, who along with other lawmakers just visited Central America, described how human smugglers -- known as coyotes - are exploiting perceived changes to U.S. immigration law after the Obama administration decided in 2012 to practice prosecutorial discretion in cases where individuals were brought into the U.S. illegally as minors.

"The violence isn't new. The situation in those countries is not new," Diaz-Balart said. "These cartels have seen a weakness in the system. They've seen statements coming from the administration that they have used in order to just frankly increase the number of people coming over.

“Remember this is not a five-year-old or an 11-year-old can't just walk over the border and get to the United States. These are organized coyotes doing this.”

The intelligence assessment, which is unclassified but not meant to go beyond law enforcement, also cited data from the United Nations office on Drugs and Crime Statistics saying despite an explosion in the number of illegal minors, crime data for Central America actually showed a dip in violence.

"There's no doubt the message went out- go across border now the United States won't do anything about it," said Rep. Kay Granger, R-Texas. "That came primarily from the coyotes who were transporting these kids. These coyotes - it really was something we weren't prepared for - they sort of advertised themselves, actually advertise, as social workers- we're gonna help you take your kids out of the poverty and the danger they have in these countries and put them in the United States, where they'll receive an education and be taken care of. And that was the message."

A draft chart obtained separately by Fox News, and circulating on Capitol Hill, showed data from Homeland Security projects that if current trends continue, as many as 90,000 illegal children will enter the U.S. by the end of this year and nearly double that,160,000, next year.

"We need a combination of things, want to swiftly and humanely return them to their home, said Rep. Michael McCaul, R-Texas, chairman of the House Homeland Security Committee. “Only until we do that will we stop the flow. So we need a message of deterrence."

While customs and border protection officials issued no statement about the intelligence report, Homeland Security officials stressed that a combination of factors, including a bad economy and security concerns, were behind the surge. Earlier this month, a media campaign was launched by the U.S. government in Central America to combat misperceptions about American laws.