Rick Scott: The Biden administration, Democrats do not care about American jobs

Sen. Rick Scott R-Fla. said Friday that the Biden administration and Democrats "don't care about jobs" and that the attempted inclusion of a $15 minimum wage in the latest coronavirus stimulus bill is just "payback" to liberal Democrats.

Scott, during an interview on "Fox & Friends," said that more jobs would be killed and unemployment rates would continue to climb during the pandemic by raising the minimum wage.

He said that the recent shutdown of the Keystone pipeline is further evidence that the administration cares less about jobs and more about politics.

The Senate's chief parliamentarian ruled Thursday that a federal minimum wage hike should not be included in the $1.9 trillion COVID-19 relief package.

In a statement obtained by Fox News, House Speaker Nancy Pelosi called Parliamentarian Elizabeth MacDonough’s decision "disappointing." Pelosi, like many other Democrats, insisted that the wage-hike be kept in the bill and said insisted it would "remain in the American Rescue Plan on the Floor tomorrow."

RICK SCOTT: "First off, we shouldn't change the minimum wage. We are in a pandemic. Look at our unemployment rate, look at the number of people that don't have a job and now we’re saying we’re going to kill more jobs by raising the minimum wage.

You know what you get paid when you don't have a job, zero. I grew up in a poor family. I watched my dad's car get repossessed twice. When you lose your job it’s zero pay... 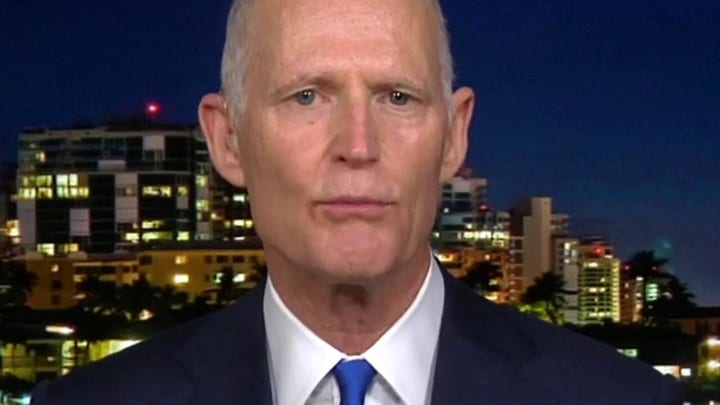 When they are talking about raising the minimum wage, they’re saying we don't care about jobs just like the Keystone pipeline they killed 10,000 jobs there. The Biden administration and the Democrats do not care about your jobs.

What I did when I was governor, we added 1.7 million jobs because we figured out how to grow businesses. They are doing the opposite. And then this package, it's just a payback to liberal Democrats."