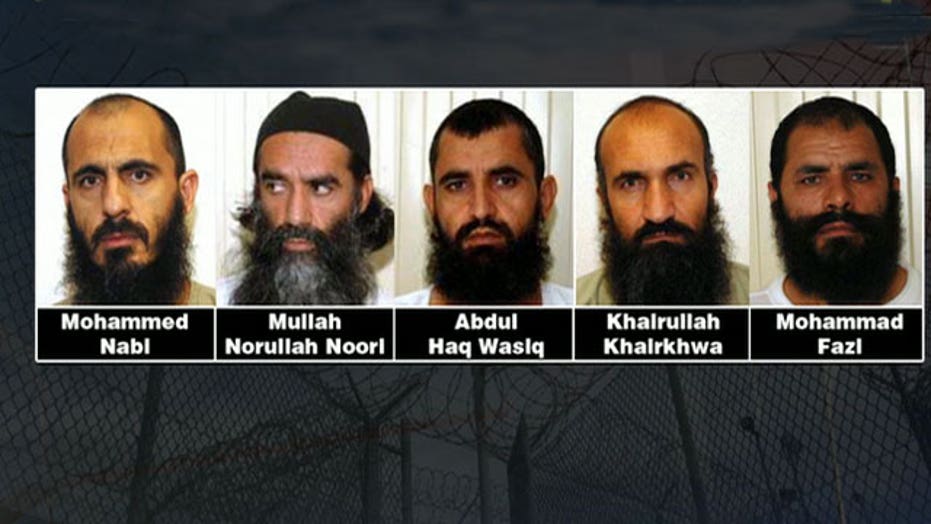 How many Gitmo parolees return to the battlefield?

Senior military officials had advised President Obama not to make the Taliban-for-Bergdahl trade, a senior Defense official told Fox News, likening it to "handing over five four-star generals of the Taliban."

The claim adds to the picture that is emerging about the tense internal debate over whether to proceed with freeing five hardened Taliban leaders from Guantanamo in exchange for Sgt. Bowe Bergdahl's release.

Sources told Fox News earlier this week that the Obama administration largely bypassed the intelligence community to green-light the swap, after such an exchange was first floated several years ago.

The Defense official, in explaining internal military opposition to the exchange, said many in the military considered Bergdahl to be a traitor -- a reference to allegations that he deliberately abandoned his post in 2009.

Yet on the other end of the trade were five high-value, sought-after Taliban leaders. The U.S. government's own records show some of them had ties to top terror figures including Mullah Omar and Usama bin Laden. Many Republican lawmakers have raised concerns that their freedom poses a major national security risk

New details are also emerging about Bergdahl's conditions in captivity, offering a complicated portrait of his five years with his Haqqani captors.

According to secret documents prepared on the basis of a purported eyewitness account and obtained by Fox News, Bergdahl at one point during his captivity converted to Islam, fraternized openly with his captors and declared himself a "mujahid," or warrior for Islam.

Yet the documents also show that Bergdahl at one point escaped his captors for five days and was kept, upon his re-capture, in a metal cage, like an animal. In addition, the reports detail discussions of prisoner swaps and other attempts at a negotiated resolution to the case that appear to have commenced as early as the fall of 2009.

The reports indicate that Bergdahl's relations with his Haqqani captors morphed over time, from periods of hostility, where he was treated very much like a hostage, to periods where, as one source told Fox News, "he became much more of an accepted fellow" than is popularly understood. He even reportedly was allowed to carry a gun at times.

The dispatches were generated by the Eclipse Group, a private firm of former intelligence officers and operatives that has subcontracted with the Defense Department and prominent corporations to deliver granular intelligence on terrorist activities and other security-related topics.

The group is run by Duane R. ("Dewey") Clarridge, a former senior operations officer for the Central Intelligence Agency in the 1980s best known for having been indicted for lying to Congress about his role in the tangled set of events that became known as the Iran-Contra scandal. He was pardoned by the first President Bush in December 1992 while on trial.

Amid concerns that the Bergdahl trade has created huge security risks, President Obama said earlier this week that the U.S. would be "keeping eyes" on the Taliban members while they spend the next year in Qatar.

At the same time, he acknowledged there's "absolutely" a risk that the former Guantanamo inmates will try to return to the battlefield.

Some of them reportedly already have made that vow. NBC reported Friday that Noorullah Noori, one of the freed prisoners, pledged to return and fight Americans in Afghanistan, according to a Taliban commander.