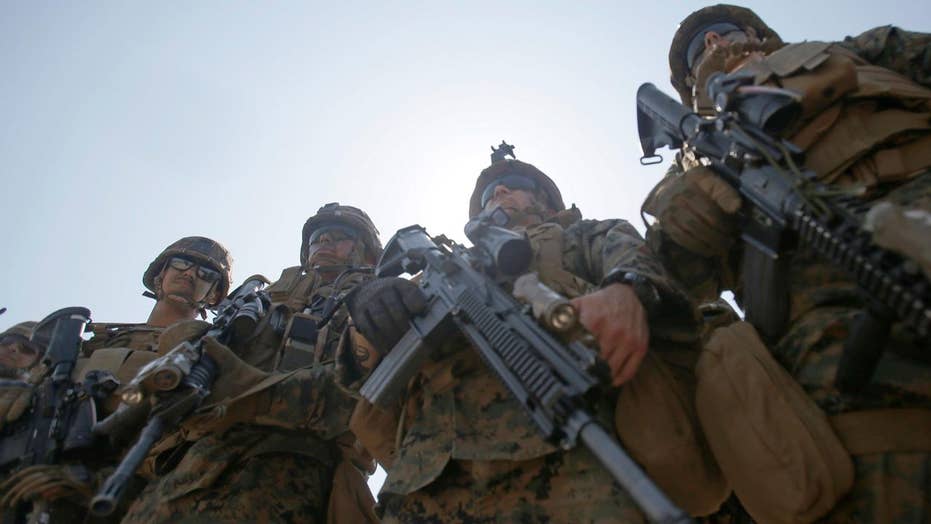 From the Air Force to the Army, America's military service branches are busy preparing ambitious proposals to expand, as President Trump renews his pledge to rebuild a fighting force he says has become "depleted."

"Our country will never have had a military like the military we're about to build and rebuild,” Trump said at last week’s press conference. “It won't be depleted for long."

The president made rebuilding the military a centerpiece of his campaign, and sent a fresh signal of his intentions with his choice for national security adviser, Lt. Gen. H.R. McMaster – who for months has sounded the alarm about the declining state of the U.S. Army.

"We are outranged and outgunned by many potential adversaries ... [and] our army in the future risks being too small to secure the nation," McMaster told a Senate Armed Services subcommittee last April. Trump’s decision to tap McMaster brings a vocal advocate for boosting the Armed Forces into his inner circle.

Seeing an opening to address longstanding readiness concerns, the service branches all have proposed plans to expand. For some, they seek a gradual increase. For others, the proposed ramp-up would be steep.

The Air Force wants to expand its forces by 30,000 airmen over the next five-to-six years.

The Army wants to expand by roughly that amount by October, according to a defense official who shared the plan with Fox News but was not authorized to do so.

At the time of McMaster’s testimony last year, the Army was at its smallest level since before World War II. Earlier this month, the U.S. Army’s second highest-ranking officer said just 5 percent of his force could “fight tonight.” Gen. Daniel Allyn, vice chief of staff of the Army, said while a third of his 58 brigade combat teams could be ready soon, only three could deploy immediately in the event of sudden conflict.

As part of a proposed expansion, the Navy also wants 82 more ships and submarines, a 30 percent increase in the size of the fleet.

But increasing the ranks is only part of the plan.

Currently, half of the U.S. Navy F-18 Hornets can't fly, and up to 75 percent of Marine Corps jets are grounded.

Roughly half of Air Force B-1 bombers are grounded awaiting spare parts. For many U.S. military jets flown well past their expected life, the shortage of spare parts comes from manufacturers that long stopped making them, forcing the services to scramble.

Fox News has documented the dire problems facing U.S. military aviation since April, reporting that some Marine Corps and Air Force mechanics have been forced to go to aircraft museums and scrapyards to strip old aircraft for parts.

Earlier this month, the head of U.S. Marine Corps aviation said if he doesn’t get more money soon, all of his aircraft will be grounded.

“If I don’t get more money, I’ll stop flying in July or August,” said Lt. Gen. Jon Davis, deputy commandant for aviation, according to the Marine Corps Times.

According to the Republican chairman of the House Armed Services Committee, Trump's plans could face obstacles at the Pentagon. Late last week, Chairman Mac Thornberry, R-Texas, tweeted: “@RealDonaldTrump promise is facing Obama holdovers @DOD who have been fighting against rebuilding & are still undermining agenda.”

Many took Thornberry’s comment as a shot across the bow directed at the deputy defense secretary, Robert Work, an Obama administration holdover who occupied the same position.

“The budget submissions that DOD makes to the president will come from Secretary Mattis,” he said. “They will reflect his thinking, and his priorities, which are to rebuild combat readiness of America's military, while being faithful stewards of every taxpayer dollar we spend on defense.”