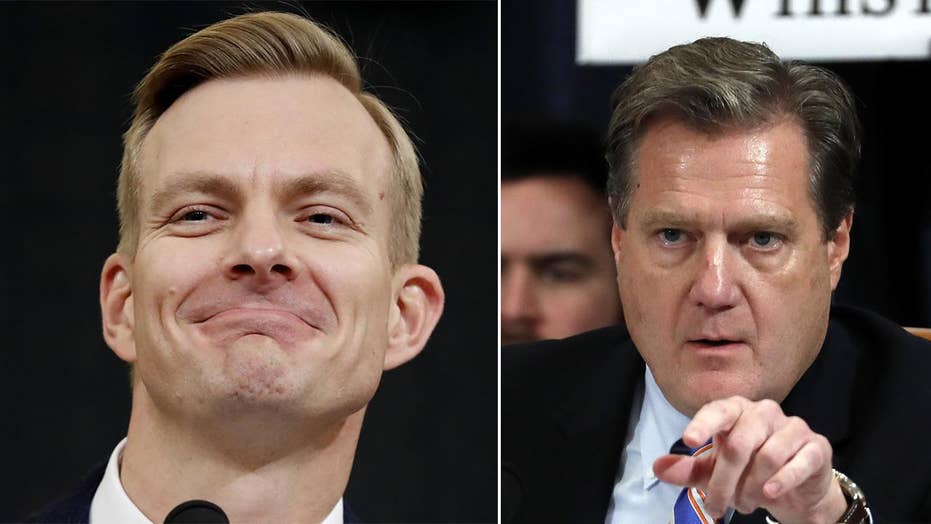 Rep. Turner tells Holmes he 'embarrassed' Zelensky by disclosing the 'Zelensky loves your a--' remark

Republican Rep. Mike Turner lectures impeachment witness David Holmes on disclosing a remark Amb. Gordon Sondland made to President Trump on Zelensky: 'That information had nothing whatsoever to do with the subject manner of any of these hearings.'

Turner confronted Holmes about his testimony that he overheard a phone conversation between Sondland and Trump a day after the controversial July 25 phone call at the center of the impeachment inquiry into alleged quid pro quo dealings between Trump and Ukraine.

Holmes said Trump was talking loud enough over the phone that he could hear the president say, "So, he's gonna do the investigation?" referring to Zelensky opening up an investigation into the Ukraine business dealings of 2020 presidential candidate Joe Biden and his son Hunter.

Holmes then said he heard Sondland reply, "He's gonna do it," and tell the president that Zelensky "loves your a--" and would do "anything you ask him to."

Turner did not ask any questions to Holmes or Fiona Hill, a former top National Security Council who also appeared for testimony on the fifth day of public impeachment inquiry hearings, but instead lambasted the diplomat for his account of what he heard.

"Mr. Holmes, that information had nothing whatsoever to do with the subject matter of any of these hearings. It was anecdotal, it was extraneous. Your statements that your interests are protecting Ukraine are very dubious when you embarrass President Zelensky by making those statements you didn’t have to make," Turner said.

"Who cares that Ambassador Sondland said that? And, you didn't embarrass Ambassador Sondland, you embarrassed Zelensky, because you know that he got asked that question in his own country, and people are hearing that statement as if it's true, and it’s totally dubious of you to do that," he added.

Holmes did not respond, and Turner yielded back his time.