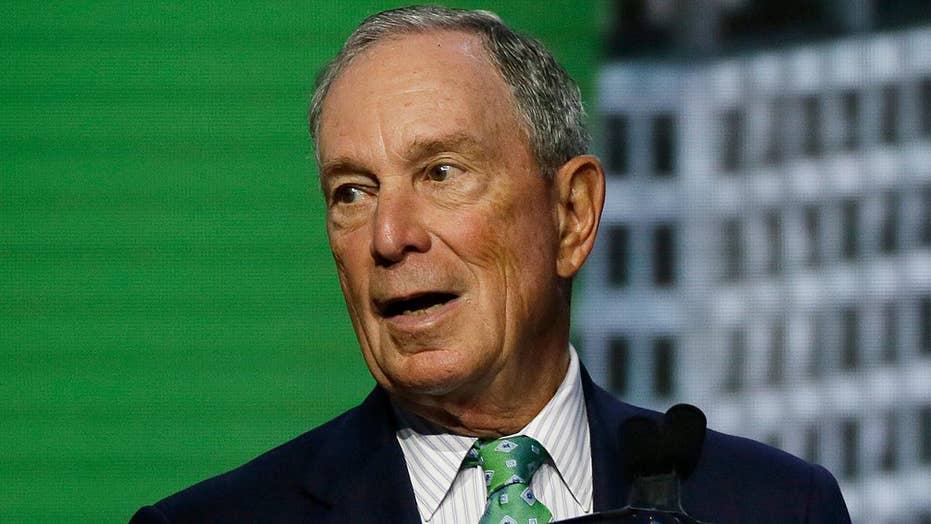 MANCHESTER, N.H. – Former New York City Mayor Michael Bloomberg on Tuesday took aim at President Trump during his first public stop during a two-day trip to New Hampshire, accusing the president of being a failure in both business and government.

And the billionaire media mogul who’s seriously considering a run for the Democratic presidential nomination said if he made it to the White House, he’d put his philanthropic foundation into a blind trust.

BLOOMBERG SWIPES AT SCHULTZ OVER POSSIBLE 2020 BID: ‘NO WAY AN INDEPENDENT CAN WIN’

At the start of a speech he delivered on climate change at the New Hampshire Institute of Politics, the environmental and gun safety advocate said that Trump “failed at business and now I think it’s fair to say he’s failing at governing.”

Targeting the Republican president over the 35-day partial shutdown of the federal government, Bloomberg said “the government shutdown was an utter failure of executive leadership, and I think it’s an example of just totally incompetent management that needlessly hurt millions of people.”

“I’m glad the shutdown is over for now, but the American people will continue paying a steep cost for White House incompetence, because the president is fixated on a wall we don’t need instead of real challenges we face,” he added.

Bloomberg, who turns 77 next month, also slammed the president as a climate change denier, saying “his own administration produced a damaging report showing that we face what they called ‘substantial damage to the U.S. economy, environment, and human health from climate change.’ And you know what the president said in response? ‘I don’t believe it.’”

At the start of a speech he delivered on climate change at the New Hampshire Institute of Politics, Bloomberg said Trump “failed at business and now I think it’s fair to say he’s failing at governing.” (Paul Steinhauser/Fox News)

And he argued that “the president’s EPA (Environmental Protection Agency) has been waging an assault on clean air and water protections.”

Bloomberg also voiced support for the Green New Deal, new legislation pushed by Rep. Alexandria Ocasio-Cortez and other progressive lawmakers which would eliminate much of the United States’ fossil-fuel consumption.

“I’ve already begun working on putting together the details of what I believe a Green New Deal should look like,” he said. “And whether I run for president or not, I will work to ensure that fighting climate change, and spurring economic development in areas that have depended on fossil fuels, is a top priority for the Democratic nominee.”

Bloomberg’s trip to the state that holds the first primary in the road to the White House sparked more speculation regarding his potential presidential bid. Acknowledging his visit, he joked “nothing political. I always come to New Hampshire in the winter when it snows.”

"Michael Bloomberg's visit to New Hampshire signals just another delusional Democrat mulling a bid for what will be a circus of a 2020 Presidential primary. But Bloomberg's out-of-touch agenda of gun control, climate control and raising taxes would only take us backward as a nation, and Granite State voters aren't buying it," RNC spokesperson Mandi Merritt said.

Askled during a question and answer session following his remarks what he would do with his philanthropic foundation if elected president, Bloomberg said “I would put the foundation into a blind trust. I did that while I was mayor.”

“Every banker’s rushing to call. Don’t call. It’s not for sale,” he joked.

After his morning event, Bloomberg headed to Nashua to tour and lunch with employees what billed as the oldest pin manufacturing plant in the country. Later in the day he was scheduled to get a taste of New Hampshire retail politics, stopping by Harvey’s Bakery and Coffee Shop in Dover, a must stop for White House hopefuls. He’s being hosted there by Bill Shaheen, a longtime attorney and husband of Sen. Jeanne Shaheen who’s also a Democratic National Committeeman. Bloomberg wraps up his trip in Concord Tuesday night at a house party hosted by Democratic activists.