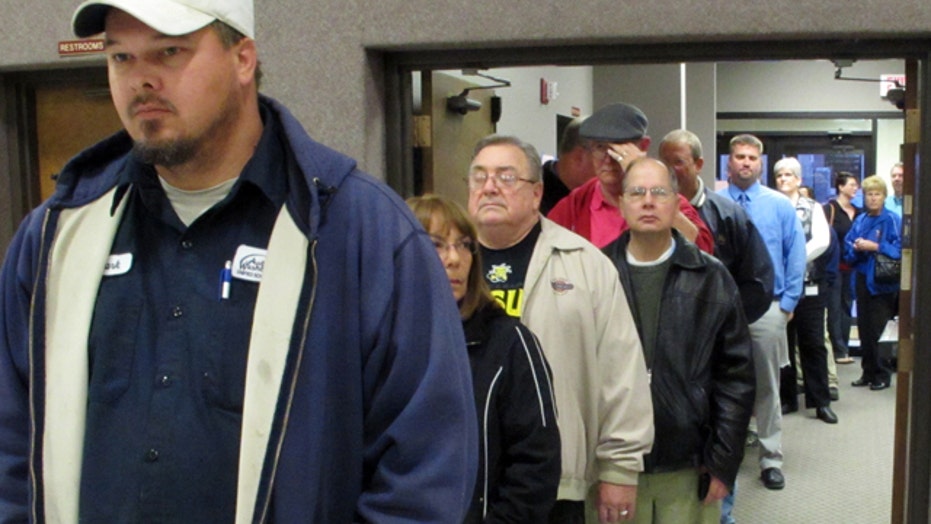 Voters likely will hear a familiar refrain Tuesday night as the election returns stream in: "Too close to call."

From Alaska to Iowa to Florida and virtually everywhere in between, a surprising number of congressional and gubernatorial candidates are locked in tight races on Election Day.

The battle for the Senate boils down to a referendum on President Obama's final two years in office, which could be decided in roughly 10 toss-up or battleground races -- though a few others could yet surprise when the ballots are in.

And at the state level, nearly a dozen governors are at risk of losing their seats - a volatile landscape not seen in decades.

Turnout is key for both parties, especially Democrats as they battle historical midterm headwinds that typically punish whichever party holds the White House. Polling consistently has shown GOP voters are more enthusiastic about this year's elections, suggesting an edge in turnout -- but Democrats point to a tried-and-true ground game they claim will pull them through in the end.

"That makes a big difference in close races, and there are any number of close races," White House Press Secretary Josh Earnest said.

Here's the lay of the land, as voters head to the polls.

Three races are more or less locked down for the GOP, barring a stunning upset: Montana, South Dakota and West Virginia.

But Republicans remain in competitive races in a number of other states, including those that President Obama lost in 2012 and where he continues to have low approval ratings. This includes Alaska, Arkansas, Louisiana and North Carolina.

Arkansas is increasingly seen as a likely flip to Republican hands, with GOP Rep. Tom Cotton expected by many analysts to defeat Democratic Sen. Mark Pryor.

"I think all people on both sides agree that one is slipping away," Democratic strategist and Fox News contributor Joe Trippi predicted. "But never say never."

Then there are the states Obama won in 2012, but where Republicans are competing. Topping this list are Iowa and Colorado, but Republican Scott Brown is also putting up a fight in his race against Democratic Sen. Jeanne Shaheen in New Hampshire.

Republicans, though, are battling to retain control of three seats: in Georgia, Kansas and Kentucky.

There's a possibility America won't even know the outcome on election night.

Late-tallied votes from rural Alaska and a likely runoff in Louisiana between Democratic Sen. Mary Landrieu and Republican challenger Rep. Bill Cassidy - and a possible runoff in the Georgia race, where a nominee must get 50 percent of the votes to win -- could keep control of the Senate undecided for days, or even until next year.

"So we've got Christmas and New Year's where we can all be glued to the [TV] set to watch two people campaign across the state of Georgia," Republican strategist and Fox News contributor Karl Rove said.

With seats up for election every two years, all 435 House seats are on the ballot.

Of them, 233 are held by Republicans and 199 held by Democrats. The other three races are for vacant seats.

Democrats would need 17 seats to take the majority, an unlikely possibility. Rather, Republicans are expected to pick up at least five more seats.

Among the most compelling races are ones in Arizona and New York.

In Arizona, Republican Martha McSally, the first female Air Force pilot to fly in combat, is trying again to take a House seat from Democrats. And in New York, 30-year-old Republican Elise Stefanik would be the youngest female House member if she wins Tuesday.

McSally is running in one of the few remaining moderate districts, for the seat once held by Democratic Rep. Gabrielle Giffords, who retired from Congress in 2012 after being shot in the head during a mass shooting. McSally again faces Democratic Rep. Ron Barber, the former Giffords staffer who narrowly defeated McSally in 2012. The nonpartisan RealClearPolitics.com lists the race as a tossup.

In New York, Stefanik, a former Bush White House aide, has positioned herself as a first-time candidate eager to bring "new ideas" and "new leadership" to the upstate 21st District.

Gubernatorial seats in 36 states are on the ballot. And nearly a dozen U.S. governors are considered in political peril on Election Day, making it one of the toughest years for incumbent governors in decades.

One survey, by Governing magazine, puts the number of toss-up races at 18 when including eight "competitive" races.

Louis Jacobson, who handicapped the races for Governing, pointed out that the last time a large number of incumbents lost was 1990. He argues the situation that governors face going into Tuesday is more of an anti-incumbent sentiment than the anti-White House feeling that looms over the Senate races.