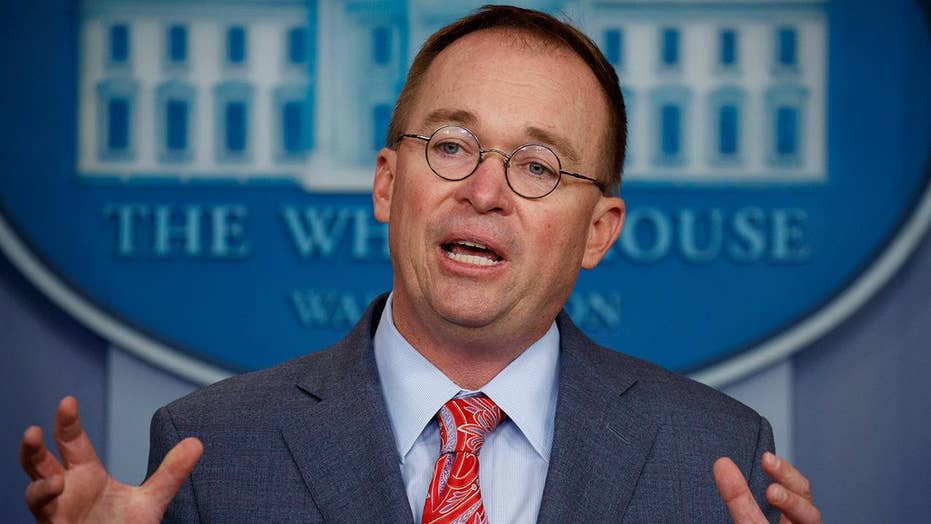 Acting White House Chief of Staff Mick Mulvaney on Friday defied a subpoena to appear before House committees for a deposition as part of the ongoing impeachment inquiry against President Trump.

Mulvaney was called to testify on Friday at 9 a.m., but did not show up.

"Past Democrat and Republican administrations would not be inclined to permit senior advisers to the president to participate in such a ridiculous, partisan, illegitimate proceeding – and neither is this one,” White House deputy press secretary Hogan Gidley told reporters on Tuesday.

Mulvaney has emerged as a central figure in the impeachment inquiry, which was opened in September after a whistleblower complaint about the now-infamous July 25 phone call between the president and Ukrainian President Volodymyr Zelensky. The whistleblower alleged that Trump, during the call, pushed Zelensky to investigate former Vice President Joe Biden and his son Hunter Biden—as military aid to the country was being withheld.

Schiff, Engel and Maloney have claimed that evidence uncovered in the inquiry, thus far, has revealed that Mulvaney was “directly involved in an effort orchestrated by President Trump, his personal agent Rudolph Giuliani, and others to withhold a coveted White House meeting and nearly $400 million in security assistance in order to pressure Ukrainian President Volodymyr Zelensky to pursue investigations that would benefit President Trump’s personal political interests, and jeopardized our national security in attempting to do so.”

A transcript released by the White House shows Trump making that request, but he and his allies deny that military aid was clearly linked to the request or that there was any "quid pro quo." Some witnesses coming before House committees as part of the impeachment proceedings have challenged that assertion.

The chairs also accused Mulvaney of playing “a central role” in the president’s move to withhold military aid from Ukraine, and criticized him for his response to questions about the funds during a press conference at the White House last month.

The chairs wrote: “You admitted publicly that President Trump ordered the hold on Ukraine security assistance to further the President’s own personal, political interests, rather than national interest."

During a press conference on Oct. 17, Mulvaney was asked why Trump ordered the hold on military aid. The White House’s position has consistently been that there was no evidence of a quid pro quo with regard to the aid. But during that appearance, Mulvaney seemed to depart from his talking points.

“We do that all the time with foreign policy,” Mulvaney said. “And I have news for everybody: Get over it. There’s going to be political influence in foreign policy.”

For days afterward, Mulvaney tried to walk back his statement after critics claimed he acknowledged a "quid pro quo," but the committee chairs described his earlier comment as a confession.

“Despite your subsequent attempts to walk-back this clear admission, your statements to the American public on October 17 were nothing less than a televised confession that President Trump’s order to freeze Ukraine security assistance was explicitly linked to Ukraine pursuing investigations as part of an effort to bolster the President’s 2020 re-election campaign,” they wrote.

The House has deposed a slew of witnesses, several of whom have indicated that Mulvaney -- who is also the director of the federal Office of Management and Budget (OMB) -- withheld military assistance to Ukraine on Trump's orders, a charge strongly denied by the White House.

The latest official to do so was Bill Taylor, the acting Ambassador to Ukraine. Schiff released Taylor’s testimony on Wednesday, showing he told lawmakers that “the hold on security assistance for Ukraine came from Chief of Staff Mick Mulvaney and that the Chief of Staff maintained a skeptical view of Ukraine.”

Taylor also testified that Mulvaney “helped schedule the call” on July 25 between Trump and Zelensky, despite opposition from ex-National Security Adviser John Bolton, who warned the call would be “a disaster.”

Taylor said that Bolton “thought that there could be some talk of investigations or worse on the call.”

“Turned out he was right,” Taylor said.