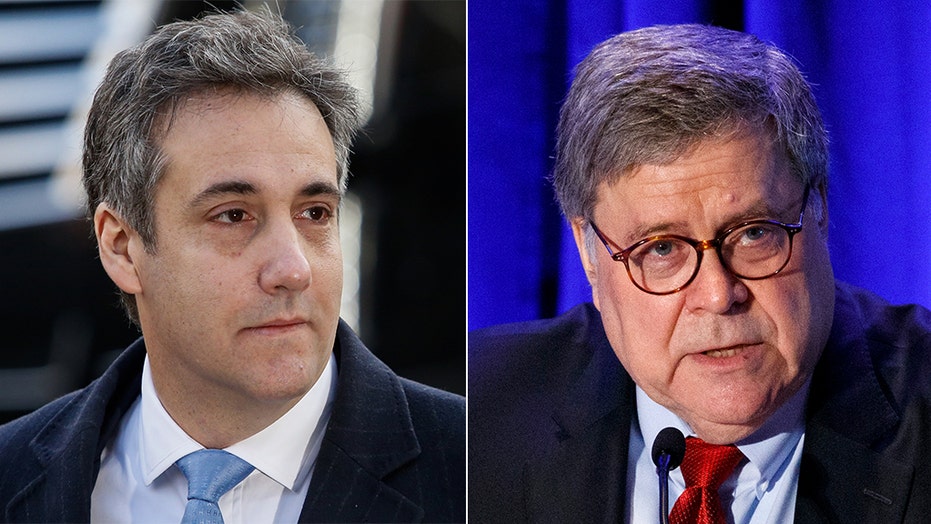 President Trump's former attorney Michael Cohen is seeking to reduce his 36-month prison sentence on the basis that Attorney General Bill Barr's Justice Department acted in bad faith during his legal battle, according to court documents obtained by Fox News.

Cohen filed a motion in Manhattan Federal Court with Judge William H. Pauley on Wednesday, seeking a reduced sentence to one year and one day, or "reducing it to a term of home confinement, coupled with a 'community service' component."

Cohen pleaded guilty to campaign finance violations, tax evasion and lying to Congress about Trump’s past business dealings in Russia in December of last year. He began serving his sentence in May.

Before sentencing, he ripped into Trump, telling the judge he felt obligated to cover up the president's “dirty deeds.”

Cohen's attorneys blamed the Justice Department (DOJ) for failing to meet with Cohen following his cooperation, and accused them of failing to act in "good faith."

"The government failed to appropriately treat Michael Cohen in 'good faith' and so applying existing case law in this and other circuits, this case should address Defendant Cohen's sentence modification plea," according to the filing.

Cohen's attorneys also took a shot at the president and said Cohen's cooperation helped arouse the conscience of the American people, against the commander in chief.

"His cooperation should not be overlooked (or diminished), as America's consciousness is raised about precisely who occupies the 'Oval Office,' and the disruptive consequences," the report said.

The filing painted Barr as a partisan political operative who is blindly loyal to the president and is willing to protect him, at all costs.

"Attorney General Barr, since his assumption of office as President Donald J. Trump's chief law enforcement officer, has been marked by controversy, criticism and conflicts of interest," one document read. "His succession following the president's vicious hectoring departure of Attorney General Jeff Sessions as attorney general has been marked by partisan loyalty to the president who appointed him."

Cohen's attorneys also cited media reports of Barr "gallivanting around Europe on 'the government's dime' in a mission to corroborate Trumpian conspiracy theories."

Fox News reached out to the Justice Department, which did not immediately respond to the request for comment.